On Last Week Tonight, John Oliver Has Tips for Those Who Want to Climb Mt. Everest Safely

Mount Everest is no longer just a mountain, John Oliver said on Sunday night’s Last Week Tonight. These days it has become everyone’s go-to metaphor for a significant challenge and one that everyone wants to cross off their bucket list, whether or not they have any climbing experience.

Scaling Mount Everest has always been risky, however as more climbers make the attempt, it’s not just ice, wind, snow, and high altitude that are costing lives, but dangerous overcrowding that makes reaching the summit look “like a line at Trader Joe’s.”

What was once an activity just for well-heeled, well-trained climbers has opened up, resulting in less experienced climbers making their way up Everest in conditions that often turn deadly. This year was one the most deadly since 2015. As Oliver notes, when people die on Everest, it makes conditions even more dangerous for the other climbers, because their bodies block the only path up and down the mountain. That can compound crowded conditions and lead to lines that back-up for hours.

According to Oliver, climbing Everest is increasingly just about the selfie, real or otherwise, as proven by an Indian couple who simply Photoshopped themselves into a summit picture. To that end, if you want the bragging rights without actually endangering your life, Oliver has a solution: TheTopofMtEverest.com. The website lets you put your face onto that of a mountain climber (or two mountain climbers or one mountain climber and one mountain climbing dog), standing atop the world’s tallest mountain with arms raised in victory. It even lets you add a fun fact to the bottom of your photo, like being the “first twin babies to summit” or whatever your want.

See the video above and some examples below. 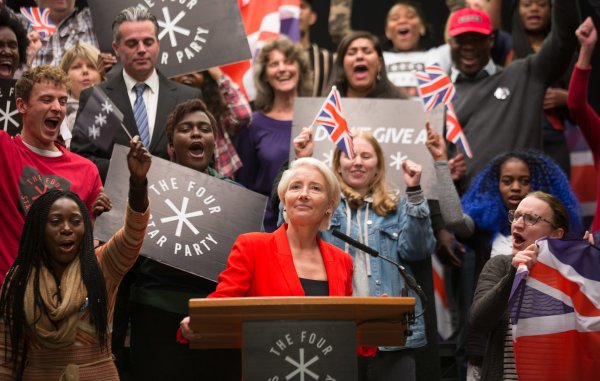 HBO's Quasi-Dystopian Years and Years Is the Future Liberals Fear
Next Up: Editor's Pick