With ICE Raids Expected On Sunday, Here's How Groups That Work With Migrants Are Getting Ready

Immigration raids expected to begin on Sunday have reignited fears across immigrant communities throughout the country, causing an uptick in hotline calls in cities like Miami and Houston, which are expected to be targeted.

Across the country, religious leaders, attorneys and advocacy organizations working with migrants are mobilizing and making preparations to help families who could be impacted by the reported plans to detain and deport potentially thousands of undocumented immigrants by Immigration and Customs Enforcement (ICE).

President Donald Trump first announced ICE raids to deport 2,000 undocumented immigrants on June 17 via Twitter, but later announced he would delay the raids for two weeks to give Democrats and Republicans a chance to address “Asylum and Loophole problems at the Southern Border.” The plan, known as “Family op,” according to The Washington Post, would target 10 major cities, including Houston, Miami, Los Angeles and Chicago.

Many families are preparing for the worst-case scenario — parents teaching their children what to do if they never come home, memorizing phone numbers of loved ones and attorneys in case they get detained and some are speaking to immigration attorneys ahead of the raids, according to Melissa Taveras, a spokesperson at the Florida Immigration Council.

“People’s fears are real and justified,” Jess Morales Rocketto, Chair of immigrant advocacy organization Families Belong Together, tells TIME. “We want to be as supportive as possible to all of the families who may be having to do totally unbelievable things like having a conversation making plans for what happens if someone raids their home. If you’re not an immigrant I think it’s hard to imagine the reality of what’s happening.”

Church leaders are preparing a network of congregations willing to provide aid, including welcoming immigrants to seek sanctuary, food pantries for families whose main income earners were arrested and free legal services. Meanwhile, attorneys are preparing to appear at detention centers at a moment’s notice to begin working cases, and activists are running campaigns to teach undocumented immigrants how to respond if ICE agents show up at their doorstep.

“I think [ICE raids] are a form of emotional, psychological violence,” Rev. Tracy Howe Wispelwey, minister of congregational and community engagement at United Church of Christ, tells TIME. “This threat, anyone who is undocumented has to live with this.”

“Due to law-enforcement sensitivities and the safety and security of U.S. Immigration and Customs Enforcement personnel, the agency will not offer specific details related to enforcement operations,” Matthew Bourke, an ICE spokesperson, said in a statement to TIME. “As always, ICE prioritizes the arrest and removal of unlawfully present aliens who pose a threat to national security, public safety and border security.”

He added that 90% of immigrants arrested by ICE’s Enforcement and Removal Operations component in fiscal year 2018 had either a criminal conviction, a pending criminal charge, were an ICE fugitive, or illegally reentered the country after previously being removed. “However, all of those in violation of the immigration laws may be subject to immigration arrest, detention and — if found removable by final order — removal from the United States.”

These are the details of some of the preparations being made to protect undocumented immigrants in the wake of the potential raids.

The Church World Service (CWS), a faith-based organization with about 40 member Christian communions across the country, is developing a network of over 1,000 congregations willing to help undocumented immigrants over the days leading up to and after the ICE raids—a network of churches willing to shelter immigrants claiming sanctuary, and provide resources to families like food, goods and free legal advice. It plans to share that network with attorneys and organizations to help maintain the privacy of the congregations, while getting information out to those impacted by the raids, Rev. Noel Andersen, national grassroots coordinator at CWS, tells TIME.

“There very well could be fatal consequences to deportation,” Andersen says, adding that he worries many undocumented immigrants could be sent back to dangerous situations they tried to escape. “It’s also part of our sacred text, to welcome the sojourner in our midst.”

According to CWS, there are currently 45 undocumented immigrants in sanctuary at churches across the country. Historically, ICE has not stepped onto church property to detain immigrants in detention, though there is nothing legally preventing the enforcement agency from stepping onto the grounds. Andersen says he is optimistic that won’t change.

“I think that’s an encouraging sign,” Wispelwey says. “That the community is stepping up and putting their property and bodies and resources on the line.”

In Los Angeles, at least four congregations announced Friday that they would begin providing sanctuary to undocumented immigrants.

“Offering sanctuary is a fairly ordinary act of humanity in the face of extraordinary acts of inhumanity,” said Rev. Mike Kinman, a rector at All Saints Episcopal Church, in a statement to TIME. “This is quite literally an instance of domestic terrorism—our president and government using fear as a weapon for political purposes. Our message to those who are being terrorized is that love is greater than fear…and at All Saints Church you will always find love in the most tangible ways possible.”

Guillermo Torres, Interim Director of Organizing at Clergy and Laity United for Economic Justice, an advocacy organization in Los Angeles, says the faith community on the ground there is becoming more mobilized in response to the raids.

“The feeling here is one of anger, riotous anger,” Torres tells TIME. “There’s a disconnection from this administration to humanity, from the pain of immigrants and their suffering.”

Groups of attorneys ready to work

Four legal aid and nonprofit organizations announced Thursday that they filed a joint lawsuit against the Trump Administration, claiming many immigrants with deportation notices were not able to argue their case before a judge because of “bureaucratic errors and, in some cases, deliberate misdirection by immigration enforcement agencies.”

“More than one hundred years ago, the Supreme Court decided that immigrants could not be deported without due process. These vulnerable refugees deserve that basic protection,” said Ahilan Arulanantham, senior counsel at the ACLU in Southern California in a public statement. The ACLU is one of the four legal aid organizations suing the administration.

Julie Pasch, an immigration attorney with the Houston Immigration Legal Services Collaborative tells TIME that she has had clients who missed their immigration court dates because they did not receive information on the date of their hearing, or they received it too late.

“There are many reasons why someone may not have received notice,” she says. “I personally have had a client who received her paper in the mail the afternoon of her court date — her court hearing was in the morning.” Pasch says she was later able to rectify the situation.

At least 10-15 attorneys in the Houston area are preparing to be at ICE detention centers in a moment’s notice on Sunday and the days after, once they receive news of where immigrants are being detained.

“There’s a possibility that people are going to be held for an extensive time, at least more than a couple of hours in local detention facilities,” Pasch says. “If people end up getting transferred to detention facilities outside the Houston area, attorneys are prepared to make the trip to wherever that may be. I think attorneys across the country are doing the exact same thing.”

Legal offices and organizations across the country have also created hotlines with information in multiple languages that inform immigrants of their legal rights—for example that they do not have to open the door to immigration officials who do not have a permit to enter their home.

Organizations have also prepared documents for attorneys who might not practice immigration law, but are still interested in providing legal services.

“The actual need depends on how many people are picked up and where they are detained,” Pasch says.

Immigrant advocacy on the ground

In Maimi, organizers and activists at the Florida Immigrant Coalition (FIC) have been passing out flyers in Little Havana explaining the constitutional rights of undocumented immigrants. On Saturday, they plan to host a clinic to teach immigrants in person how to respond if they’re approached by ICE agents, or what kind of plans to put in place should they be detained.

“This isn’t the first time, right?” FIC spokesperson Melissa Taveras tells TIME. “We’ve been facing these raids from before, from the Obama Administration. So this isn’t the first time that we have to do this. But obviously there’s been an uptick in fear because of the immigrant narrative that contributes to people feeling afraid.”

In El Paso young people at the Border Network for Human Rights (BNHR) are trained to record actions by immigration enforcement officials, a practice known as “migra watch.”

“Even though the El Paso and New Mexico region have not been listed as a target, we just don’t believe that,” BNHR executive director Fernando Garcia tells TIME. “At the end of the day we’re expecting something to happen.”

So far, protests are being planned at ICE detention facilities in San Fransisco and Philadelphia.

“We have been able to create a system in place to try to protect the safety and due process for [immigrants],” Rev. Deborah Lee, director of the Interfaith Movement for Human Integrity in Oakland, Calif., tells TIME. “We want people to lean into those systems, the networks of support and protection that have been created, and not just succumb to the overwhelming threat of fear and panic that threat of raids is intended to do.” 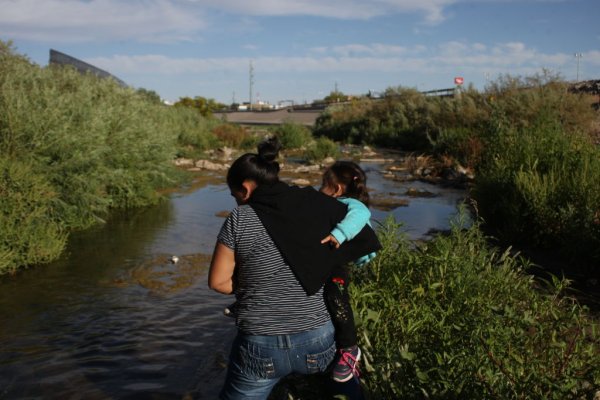 The Trump Administration Is Deporting Asylum Seekers to an Area the State Department Says Is as Dangerous as Afghanistan
Next Up: Editor's Pick