Section 1325 of U.S. Immigration Law Was a Hot Topic in Wednesday's Debate. Here's Why It's a Big Deal

One of the most heated exchanges from the first 2020 Democratic presidential debate Wednesday night was over a 90-year-old provision in U.S. immigration law that candidates repeatedly cited by its number: section 1325.

Two Texans vying for the White House, Beto O’Rourke and Julián Castro, debated the provision as part of a wider discussion of immigration policy and the hundreds of thousands of migrants who are crossing the U.S. border to request asylum.

Castro, the former mayor of San Antonio and Housing and Urban Development Secretary, called on O’Rourke to support repealing the section and then urged all of the Democratic candidates to also support a repeal. Elizabeth Warren has also supported a repeal.

“But you’re looking at just one small part of this. I’m talking about a comprehensive rewrite of our immigration laws,” O’Rourke responded, adding that he has introduced legislation while in Congress to ensure those seeking asylum and refugees are not criminalized.

“If you did your homework on this issue, you would know that we should repeal this section,” Castro said, ending the conversation.

It’s the section of U.S. immigration law that makes entering the country illegally a criminal offense.

Though being present in the United States without authorization is considered a civil offense, similar to a traffic violation, section 1325 is what makes people who arrive in the U.S. without proper documentation open to criminal prosecution.

And it has a controversial history. The statute has been in effect since 1929, constructed by Sen. Coleman Livingston Blease, who later became governor of South Carolina. Blease was a white supremacist who defended lynching and segregation.

“If somebody is attempting to smuggle human beings into the United States, if they are attempting to cross illegal drugs into this country, I want to make sure that we have the legal mechanism necessary to hold them accountable and to detain them to make sure they do not pose a threat to this country or to our communities,” O’Rourke said during a CNN Town Hall on June 16. “I do not think it should be repealed.” 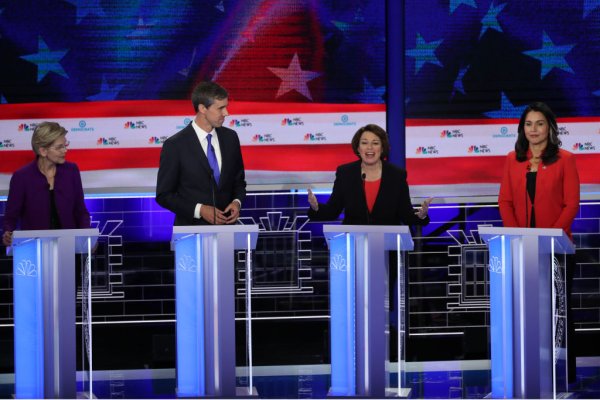 Women, On Average, Talked More Than Men During the First Democratic Debate. But Here's Who Talked Most
Next Up: Editor's Pick