More than 250 journalists were imprisoned around the world last year, and at least 53 journalists were killed on the job — making 2018 the deadliest year for the press in the past three years, according to the Committee to Protect Journalists.

Those stark numbers have fueled calls for stronger protections for journalists and their work. TIME has partnered with a dozen leading news organizations — including Reuters, the Associated Press, Forbes and HuffPost— to launch the One Free Press Coalition with the goal of promoting press freedom around the world.

“TIME is proud to stand with the One Free Press Coalition and journalists all over the world who are taking great risks in pursuit of greater truths,” said TIME Editor in Chief and CEO Edward Felsenthal.

On Friday, the coalition released its first-ever 10 Most Urgent list, identifying 10 journalists around the world who represent the most severe examples of abuses to press freedom or cases of injustice.

TIME named The Guardians the 2018 Person of the Year, recognizing four journalists and one news organization for their work in the face of threats. Two of those journalists, Maria Ressa and Jamal Khashoggi, now appear on the 10 Most Urgent list, which will be updated each month.

Read about their cases here:

1. Maria Ressa and Rappler (Philippines): Arrest and legal threats for the critical media outlet and its editor.

National Bureau of Investigation officers arrested Ressa at Rappler on Feb. 1 over a cyber libel case filed against her by the Justice Department. She was released the next day, but Rappler faces separate retaliatory tax charges. CPJ and First Look Media are partners in a legal defense fund for journalists, of which Ressa and Rappler are the first recipients.

Nearly five months after his brutal murder at the Saudi Arabian consulate in Istanbul, and despite findings from the CIA that point to the Saudi crown prince’s involvement, there has been no independent UN criminal investigation. Calls for the White House to release intelligence reports have gone unheeded, along with a deadline to reply to Congress as required under the U.S. Global Magnitsky Act.

Jamal Khashoggi was killed in October inside the Saudi Arabian consulate in Istanbul.
Mohammed Al-Shaikh—AFP/Getty Images

Al Nafjan, founder of the Saudiwoman’s Weblog, was sent to prison in relation to her reporting on elections, human rights activists, and the fight for women to have the right to drive in Saudi Arabia. She is one of at least 16 Saudi journalists behind bars, according to CPJ’s most recent census of imprisoned journalists.

Following their investigation into a security force massacre of Rohingya men and boys in western Rakhine State, the pair were convicted under the colonial-era Official Secrets Act and sentenced to seven years each in prison even though a policeman testified they had been entrapped. Their appeal was rejected in January; a final appeal is pending.

Duque has endured kidnapping, illegal surveillance, psychological torture and repeated exiles as a result of her work. Colombian courts convicted three high-ranking officers of the Colombian security services for torturing in 2003 and 2004 Claudia and her daughter. As of January 2019, all the defendants in the case were free.

Mohamed Cheikh Ould Mohamed was arrested in 2014 for an article he wrote criticizing the Mauritanian caste system and initially faced a death sentence. The apostasy charges have been dropped, but he still remains behind bars, with limited contact with his family and the outside world.

As editor of the Juba Monitor, Nimiriano fights to keep her colleagues out of jail for their reporting, and has in the past been ordered by the government to shut down the paper. She perseveres in spite of arrest threats and constant censorship of her and her colleagues.

Pelin Unker wrote a piece as part of the Paradise Papers corruption investigation in 2017, revealing offshore holdings of the family of then-Prime Minister Binali Yıldırım. As retribution, authorities charged and sentenced him to 13 months for insulting the prime minister.

Thomas Awah Junior, a correspondent for privately owned Afrik 2 Radio and publisher of Aghem Messenger monthly magazine, was arrested while interviewing protesters and is serving an 11-year sentence in Cameroon on anti-state and false news charges. CPJ has written to President Paul Biya requesting that he be released on humanitarian grounds.

After a one-day trial, Tran Thi Nga was sentenced to nine years in prison on charges of “spreading propaganda against the state.” She produced a number of videos critical of authorities on topics like toxic environmental spills and government corruption

Vietnam News Agency/AFP/Getty ImagesTran Thi Nga (C) stands during her appeal at a local people’s court in the northern province of Ha Nam on Dec. 22, 2017. 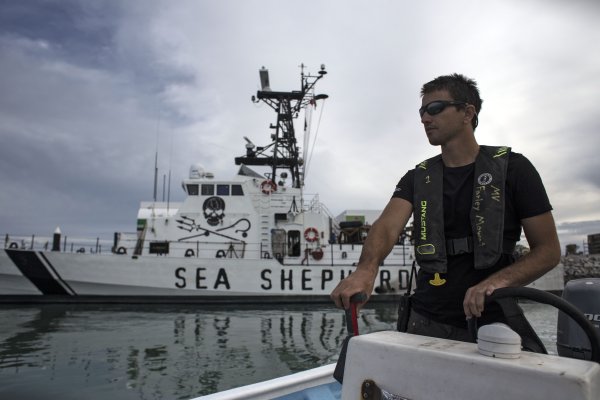 One of About 10 Remaining Vaquitas Found Dead off Mexico Coast
Next Up: Editor's Pick