A demonstrator dressed as Saudi Arabian Crown Prince Mohammed bin Salman (C) with blood on his hands protests outside the Saudi Embassy in Washington, DC, on Oct. 8, 2018.
Jim Watson—AFP/Getty Images
By Amy Gunia

The Trump administration authorized the sharing of nuclear power information with Saudi Arabia shortly after the murder of journalist Jamal Khashoggi in October, Reuters reports.

Senator Tim Kaine said the first approval — called an 810 authorization — was granted by the Department of Energy on October 18, 16 days after Khashoggi was killed, and another was given on February 18. Khashoggi, who was a columnist for the Washington Post and an outspoken critic of Saudi Arabia’s Crown Prince Mohammed bin Salman (MBS), disappeared in the Saudi consulate in Istanbul last October where he was brutally murdered.

Kaine took to Twitter to say that he has “serious, serious concerns” about the administration’s dealings with the kingdom.

An 810 approval allows for the transfer of technology or information related to nuclear activity overseas. The Trump administration has granted seven 810 approvals to U.S. companies since 2017 to aid Saudi Arabia in building its first two nuclear power reactors, according to Reuters.

Despite a CIA assessment concluding that MBS ordered Khasshoggi’s killing, Trump has refused to speak out against the Crown Prince or cut business dealings with the kingdom.

In late May, the Trump administration bypassed Congress by announcing an emergency provision to push through the export billions of dollars of weapons to Saudi Arabia and other Gulf states. 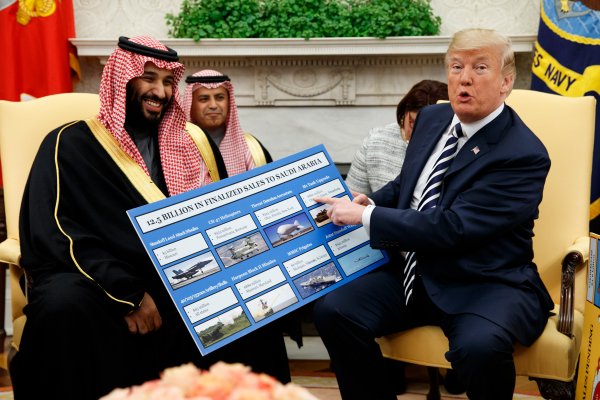 Trump Administration May Bypass Congress to Sell Weapons
Next Up: Editor's Pick