The international face of Hong Kong’s democracy movement, Joshua Wong was released from prison in Hong Kong Monday at a critical juncture in the city’s fight for political freedom. Just the day before, a huge demonstration in the heart of the city forced Hong Kong’s leader, Chief Executive Carrie Lam, to issue an apology for her handling of a bill that would allow for the extradition of fugitives to mainland China.

Sunday’s march was the second massive demonstration in a week to call for the withdrawal of a bill that has united virtually all segments of society—from teens to grandparents, student radicals to conservative business figures—in opposition to it. While the government says the bill is necessary to stop Hong Kong from becoming a haven for criminals, critics say it will be used by China to apprehend dissidents and political opponents, thereby threatening the semi-autonomous enclave’s cherished freedoms.

Wong was in prison for both demonstrations, completing a sentence for his role int he 2014 democracy uprising known as the Umbrella Revolution. But he is now out and eager for the fray. At 21, Wong is already a seasoned organizer, and his release will be a boost for a movement that has been characterized as leaderless. He went straight from prison to address a rally outside Hong Kong’s legislature, and spoke to TIME immediately afterward.

How do you plan to get involved in the protests now that you’re out of jail?

I believe more and more rallies, protests, and marches will happen. If Carrie Lam refuses to step down, she needs to pay her political price. What I mean is that it’s time for her to end her political career.

Are you afraid of going back to prison?

[This won’t be] the final time for me to serve a jail sentence. I believe the government will prosecute me again, but things can’t defeat me, just make me stronger. At least I hope to prove, to let people to know, that even though I’ve been jailed … I’ve not stepped backwards. I still stand on the front lines with the people in Hong Kong.

The current demand is for Carrie Lam to step down and withdraw the bill. Is that good enough, or is your fight a much broader one?

Carrie Lam is not the leader elected by people of Hong Kong. What we asked for five years ago, in the Umbrella Movement, was the right to free elections, to freely elect the leader of our city. People might feel downhearted or depressed after the end of the Umbrella Movement because we couldn’t achieve what we want. But people are coming to the street again. Even if Carrie Lam steps down, the next leader is still elected by Beijing. That’s why we still continue to fight. If you asked anyone living in Hong Kong one month ago, told them that, “Hey, there will be demonstration with millions of people joining the fight,” no one would have believed it. However, we turn something impossible to possible. Tremendous change lies ahead.

So you think that the system of government needs to change in Hong Kong? What would you like to see?

Free elections, to freely elect the leader of our city … to not prosecute or arrest any activists that fight for the future of Hong Kong.

Carrie Lam issued an apology statement last night during the end of the protest. What are your thoughts on it?

Sorry is not enough. Instead of asking for her to explain more, it’s better to end her political career, to have a retired life.

What do you want the world to know about the protesters?

Hong Kong is different to mainland China. We protect our freedoms. We ask for free elections to elect the leader of our city. It’s not the final battle, it’s not the endgame, because the Hong Kong government and Beijing have turned a whole generation of students from citizens to dissidents. I think President Xi might be really angry at how Carrie Lam generated more than a million dissidents that live in and love this place.

What do you want countries like the U.S. to be doing?

The Hong Kong Human Rights and Democracy Act [introduced in the U.S. Senate] is a policy act that is strongly supported by activists like me and also the activist group that I belong to, Demosisto. I urge the U.S. Congress to pass the act. As we know, Hong Kong enjoys and is recognized as a separate economic entity it’s because still has a certain degree of freedom but with what has happened in the last few years, Beijing needs to pay the price for it.

What was the first thing you did when you got out of jail this morning? 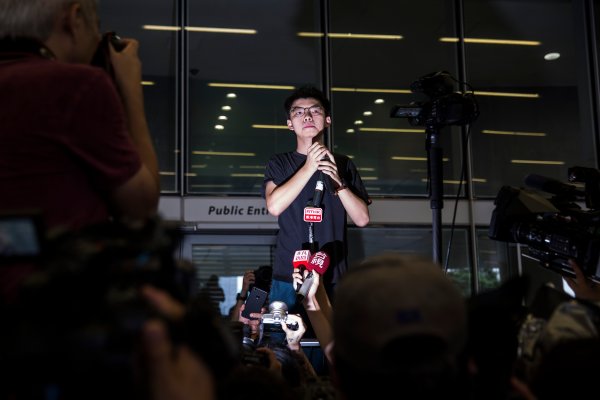