Prominent freedom campaigner Joshua Wong was released from prison Monday morning local time—a day after one of the largest street protests in Hong Kong’s history forced an apology from the city’s top official over a divisive extradition bill.

Wong, 22, was completing a three month sentence for his role in the 2014 democracy protests known as the Umbrella Revolution. His release from jail at a critical juncture in the city’s push for greater political freedoms will give a morale boost to youthful protesters and has the potential to make the authorities nervous.

A media scrum in the sweltering June heat greeted the young dissident. Members of his Demosisto party chanted “Oppose China extradition! Oppose the evil law!” as Wong walked out to meet the press.

He thanked Hong Kong people for their support and called for the city’s embattled leader, Chief Executive Carrie Lam, to step down. “It’s hard for us to believe a liar,” he said. He also vowed to join the fight against the extradition bill and urged the international community to help preserve Hong Kong’s “unique standing.”

In an article written for TIME while still in jail, Wong appealed for the world to keep watching local developments. “A victory for Beijing is a victory for authoritarianism everywhere,” he wrote. “Keeping an eye on this place sends an important message to Chinese authorities that democracy, not authoritarianism, is the way of the future.”

He quickly returned to Twitter after his release to announce his solidarity with protesters.

Wong is expected to speak at a rally later today outside the legislature, where protesters have been gathering since the middle of the morning. Many of them are young striking students.

“I want to support Hong Kong and I want to see Carrie Lam step down,” said Olivia Ho, 15. “I have a test tomorrow but this is about Hong Kong’s future and my future.”

Added 14-year-old Shanice Yu, who had just finished her English exams and came straight from school, “As a Hong Konger, I feel I have the responsibility to fight for our city’s freedoms.”

‘Under attack by an authoritarian government’

On Sunday, huge numbers of Hongkongers brought the city’s downtown areas to a standstill as they peacefully marched against a legislative amendment that would allow fugitives to be extradited to China for the first time. The Union Jack and the Hong Kong colonial flag were seen waving above the crowds—an indication of just how distant many in the semi-autonomous enclave, and former British colony, feel from their sovereign power China.

The death of a 35-year-old man on Saturday, who fell from scaffolding after hoisting a banner denouncing the extradition bill, gave added emotional force to the marchers, who hailed him as a martyr to the Hong Kong freedom movement and formed long queues to lay floral tributes at the scene of his death. Bouquets were still piled high outside the Pacific Place mall on Monday morning as commuters made their way to work.

The government says that the extradition measure is necessary to prevent Hong Kong from becoming a haven for criminals, and adds that political offenses will not be covered by the law. However, critics are unconvinced, pointing out that China frequently charges dissidents with criminal offenses. Many in Hong Kong fear that Beijing will use the provision to come after its political opponents in Hong Kong and silence opposition.

A bid to fast-track the bill has proved a disastrous miscalculation for the administration, and joined a broad swathe of Hong Kong society in opposition to Lam. Yesterday’s march was an impressive show of unity by teenagers and students, the elderly, business people, professionals, families and religious groups.

Local media reports that even Lam’s supporters among the pro-Beijing political parties are attempting to distance themselves from her.

Lam issued an apology for the debacle Sunday night but her mea culpa has been dismissed as belated, insufficient and insincere. Protesters are demanding complete withdrawal of the bill, not merely its postponement.

Read more: Hong Kong Is on the Frontlines of a Global Battle for Freedom

On Monday morning, a called-for strike did not materialize, but several dozen diehard protesters remained on Harcourt Road, in the shadow of the Central Government Offices and the People’s Liberation Army headquarters, shutting the thoroughfare to traffic until just before 11:00 a.m., when they dispersed peacefully.

Legislator Eddie Chu was among the crowd. He told TIME that Hong Kong’s “tragedy” was its unrepresentative political system. “We define ourselves in the state of being under attack by an authoritarian government. This defensive position has been forming for years already,” he said.

He added that the movement would set realistic goals. “Some young people have been asking for independence, for sovereignty,” he said. But “this particular movement does not touch on political power, universal suffrage, or independence … if we really want to gain anything from Beijing we need to set our target within an acceptable boundary.”

Another legislator at the scene, Au Nok-hin, said: “Even though Harcourt Road has been reopened, this does not mean in any way that the protesters have retreated. Our demands remain simple, for the government to respond to these four points: Carrie Lam step down, release the arrested protestors, condemn police violence, withdraw the bill.”

Rebecca Lam, 29, told TIME that the chief executive’s apology was “not genuine enough” and said the push for greater political freedom would continue. “We can’t end the movement here.”

Prominent figures in Hong Kong’s fight for freedom agree. “It is going to be a long battle for us to fight for our democracy under the Communist Party of China,” said Wong outside prison. “I’m not sure how many months this battle will take.” 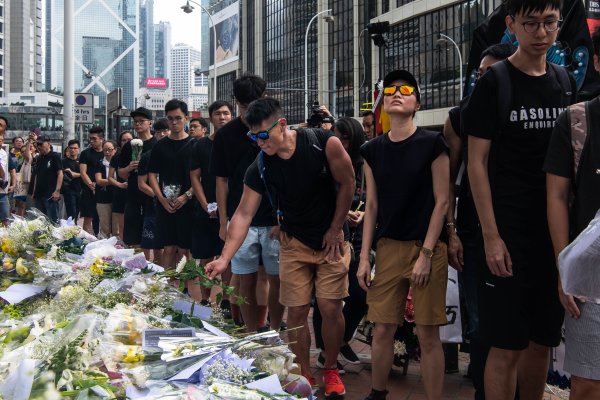