China Shows It's Getting Serious About Climate Change

Chinese President Xi Jinping listens as President Barack Obama speaks during an official state arrival ceremony for the Chinese president at the White House in Washington on Sept. 25, 2015.
Evan Vucci—AP
By Justin Worland

China—the world’s largest polluter—has sought to portray itself as a leader in the global fight against climate change in recent years. The country has expedited the development of renewable energy power plants, experimented with cap-and-trade programs and last year committed to curb its growing carbon dioxide emissions in coming decades.

But despite these initiatives many lawmakers in the United States and policy makers around the world have viewed China’s environmental programs with skepticism—more promise than performance. China’s landmark announcement Friday of a national cap-and-trade program and other policies to reduce carbon emissions should ameliorate some of those concerns, experts said, even while the country faces roadblocks to implementation.

Last year’s joint announcement from the U.S. and China set big goals on the part of both countries to eventually reduce greenhouse gas emissions. The U.S. promised to reduce carbon emissions by 26% to 28% below 2005 levels by 2025, and Chinese officials said the country’s carbon dioxide emissions would reach peak levels by 2030.

This week’s announcement, both from the U.S. and China, follows up on that target, providing a plan to reach it. A cap-and-trade program would set a national limit in China on carbon emissions in the heavy-polluting industries of power generation, iron and steel, chemicals, and building materials and require companies to buy credits to pollute. Another program will prioritize the use renewable energy on the grid. (Right now, while China produces a great deal of renewable energy, problems with the grid means much of it goes unused.) The country will also improve appliance and vehicle efficiency standards.

“It’s really walking the talk to the commitment last year,” said Alden Meyer, director of strategy and policy at the Union of Concerned Scientists. “China has really been working over the last year to put flesh on the bones.”

China benefits internationally from taking on climate change—especially at a time when the country is coming under pressure for alleged cyberespionage and territorial expansion—but experts say the most logical reason to trust the commitment China may be because of internal issues the country faces. Most of the country’s energy currently comes from coal. In the past, coal plants in China have been cheap and easy to build, but the fossil fuel source has led to crippling pollution and a dramatic public health problem. Air pollution in China causes 1.6 million premature deaths every year, or 4,400 per day, research has shown. At the same time, the country is the world’s largest importer of foreign oil, leaving it dependent on shifting oil prices and the messy geopolitics of the Middle East. Renewable energy provides the logical alternative, experts say.

“Their cities are choking, to put it bluntly,” said John Creyts, managing director at the Rocky Mountain Institute, an energy think tank. “They need a development pathway that allows them to grow without choking their people and requiring them to be depend on external economies for the resources they need.”

In fact, China has already matched commitment with action. In 2014, for instance, the country invested $90 billion in clean energy, compared to $52 billion in the U.S., according to a U.S. government report.

Still, experts say implementing some of the policies in China will face uphill battles given the many overlapping jurisdictions and different reporting standards throughout the sprawling country. In their announcement Friday, China and the U.S. said they would develop a program to ensure transparency, but the details remain unclear.

Many in the U.S. and around the world have expressed skepticism about investing in efforts to fight climate change, arguing that costly efforts would lead to a free rider problem of sorts. They say under national plans to curb climate change, the U.S. would invest in expensive efforts to cut carbon emissions while other countries—primarily big developing nations like China and India—would reap the benefit without doing anything to slow their own emissions.

The argument has played out in public as recently as last week, when Republican presidential contenders suggested that government regulations to address climate change would leave the country at a competitive disadvantage.

“We are not going to destroy our economy,” said Florida Senator Marco Rubio, a GOP presidential candidate. “America is not a planet. And we are not even the largest carbon producer anymore, China is. And they’re drilling a hole and digging anywhere in the world that they can get a hold of.”

Meyer says this week’s announcement undercuts this opposition, leaving the U.S. to show how it will meet its commitment to cut emissions.

“This is yet another indication of momentum and seriousness,” Meyer said. “The job’s not done yet.” 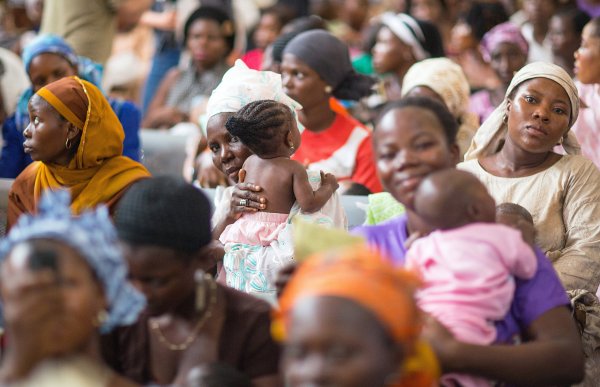 Nigeria Hits Major Milestone in Fight Against Polio
Next Up: Editor's Pick