The Paris Agreement Lives on at the U.N. Climate Change Conference. But Political Disruption Still Remains a Threat

15 December 2018, Poland, Katowice: Michal Kurtyka (M), President of the UN Climate Change Conference COP24, and other participants of the climate summit are pleased about the decision of the compromise at the world climate summit.
picture alliance—picture alliance via Getty Image
By Justin Worland / Katowice, Poland

Negotiators from around the world struck an eleventh-hour deal Saturday, laying out rules to implement the Paris Agreement and keep the landmark 2015 climate accord intact.

But it wasn’t easy.

The two-week, drawn-out fight that included a rehashing of old battles and the introduction of new ones stretched late into the night here at the COP 24 UN climate conference in Katowice, Poland. The pitched battle hints at challenges to come in the global fight against climate change as the world order continue to face a wave of political pressure that has put a strain on international cooperation.

“It has been a long road,” said Polish Energy State Secretary Michał Kurtyka, who served as President of the conference. “This deal hangs in fragile balance, we will all have to give in order to gain.”

The issues on the table in Katowice were largely technical questions centering on accounting, finance and seemingly arcane word choices that signal how aggressively countries will cut their emissions. But geopolitics never lurked far from the surface, and the urgency of climate change never proved great enough to keep the politics from bubbling up and disrupting proceedings.

“People are pulling away at the edges of the multilateral system and you wonder whether or not it’s going to unravel further,” said Rachel Kyte, who headed the World Bank’s climate-change program and who now leads Sustainable Energy for All, before the final decision. “Is the beginning of something bigger? How do we cope with it?”

The potential for disruption was clear from the beginning. The U.S., the world’s biggest economy and second-largest emitter of greenhouse gases, promised to exit the Paris Agreement last year under President Trump’s direction. This left a void in leadership even as the U.S. officially remains in the talks until it’s eligible to withdraw in 2020. That void opened the door for others to rebel, particularly in places where climate change does not jive with the priorities of populist or authoritarian governments.

In a highly-publicized affair, the U.S. held an event promoting fossil fuels, during which a White House official argued that the country was injecting a dose of “reality” in the face of “alarmism” around climate change. The event won the support of Australia, whose ambassador for the environment joined the panel. And a senior administration official said that other countries had conveyed that they appreciate the U.S. perspective even if they don’t feel comfortable stating so publicly. “They don’t talk about it as much,” said a senior administration official. But, “there’s an appreciation for the realism.”

In another conflict, Brazil faced off against the rest of the world when it threatened to reject any deal because of language that would fix an accounting loophole that gives the country double credit for preserving forests in the Amazon. The rest of world protested, but Brazil refused to budge and in the final hours negotiators decided to punt the issue to a future conference.

One of the biggest clamors of the conference came as four oil producing countries, including the U.S, Russia and Saudi Arabia, questioned the validity of climate science and refused to recognize the legitimacy of a report from the IPCC, the UN’s climate science body, showing the effects of climate change if temperatures rise more than 1.5°C.

Changing geopolitics even hit in places where governments care deeply about the threat of climate change. The wave of populism in the European Union fractured the block, weakening its negotiating position. Alden Meyer, director of strategy and policy at the Union of Concerned Scientists and a longtime climate negotiations expert, cited political change in Italy, the ongoing Brexit fiasco and the weak positions of German Chancellor Angela Merkel and French President Emanuel Macron as contributing to the E.U.’s struggle to wrangle other countries. “There’s always some of these clashes, but it’s more acute here,” he says.

And then there’s the U.S. relationship with China, which is in disarray over ongoing trade issues. The two countries, while often at odds in previous negotiations, often served as mediators between developing and developed countries and helped broker key deals. “There was a capacity to be a convener, each of us,” says Todd Stern, who served as the chief U.S. negotiator under Obama, of the U.S. and China. “That’s not available right now.”

All of these disruptions helped push the talks long into overtime, with a mix of yawns and applause when Kurtyka finally called the conference to an end more than a day later than originally scheduled. The deal that resulted came as a relief: the multilateral approach to fighting climate change will live to see another day.

At the same time, the new agreement left much to be desired from nearly all parties. “I trust that whenever you found dissatisfaction in one part of the text, it was balanced with satisfaction in another,” said Kurtyka.

Perhaps more importantly, all but the most out-of-touch acknowledged that the deal leaves much work to be done if the world actually hopes to limit temperature rise to 1.5°C, a level that the new IPCC report shows could wipe some countries off the map and cause widespread devastation across the planet.

As countries continue to wind through the difficult international negotiation process, the obvious answer to make up for the gap caused by political disruption lies outside of the political system. Indeed, some local governments, businesses and apolitical multilateral organizations are already trying to take charge.

For most of the two decades that the U.N. has held these meetings, talk has focused on how to make action on climate change happen at a nebulous point in the future. Now, in large part thanks to the Paris Agreement, that action has already begun. And, while the international system is doomed to be defined by the least common denominator, many cities, states and businesses have stepped up to the challenge. In the months leading up to this conference, the World Bank committed $200 billion in climate investments, a slew of businesses lobbied for market solutions to climate change and alliances of sub-national governments in Japan, Argentina and Mexico joined the U.S. in making commitments to fill the gap in their national governments’ efforts.

“To combat climate change we need much much more than government,” says Laurence Tubiana, CEO of the European Climate Foundation and a central framer of the Paris Agreement. “It’s not for state only. It’s for society.”

The only issue is that none of this is moving fast enough. The IPCC report shows that temperatures have already risen 1°C as a result of human activity and that figure will surpass 1.5°C as early as 2030 without a dramatic shift in direction. A lot of work is necessary to facilitate such a shift. And that’s going to be a huge challenge so long as political tensions persist. 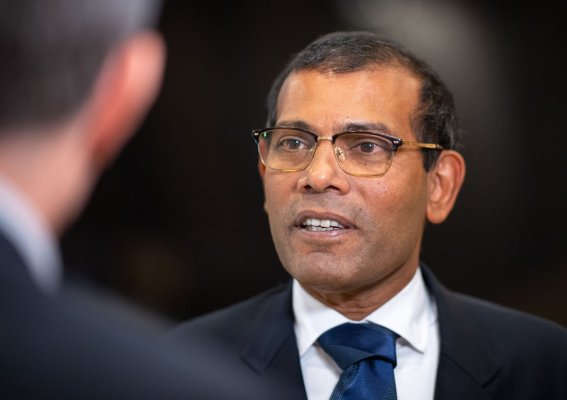 Tiny Countries Step Up on Climate Change
Next Up: Editor's Pick