The 2019 NBA Finals are in full swing, a showdown between the reigning champs, the Golden State Warriors, and the Toronto Raptors, who are making their first appearance in the finals. While competition has been fierce on the court, there’s also been plenty of action happening on the sidelines thanks to one Aubrey Drake Graham.

While the Toronto-born rapper and noted basketball enthusiast got a warning from NBA commissioner Adam Silver about proper sideline decorum after his antics last week during the Eastern Conference Finals, that hasn’t stopped Drake from being a zealous basketball fan during the finals. Case in point: Going to great lengths to troll the Golden State Warriors in order to celebrate his hometown team’s first appearance in the NBA finals.

From goading Klay Thompson with his best “Hotline Bling” dance moves to sporting a vintage Dell Curry Raptors jersey at the first game, here’s a run-down of Drake’s most outrageous moments during the 2019 NBA Finals so far.

Drake kicked things off in high gear for the first game of the 2019 NBA Finals with the Raptors hosting the Warriors in Toronto by sporting a vintage Dell Curry jersey from Curry’s time with the Raptors (he played for the Raptors for three seasons, from 1999 to 2002). This was an obvious dig at Steph Curry, Dell’s son and one of the Warriors’ star players. Drake’s decision didn’t go unnoticed by Dell himself and his wife, Sonya, who were on deck to support their son at game 1.

It turned out that Drake also foiled Steph’s plans to honor his dad in Toronto. According to an interview with the CBC, Dell said that Steph had asked him for one of his Toronto jerseys, planning to wear it into game 2. But Drake beat him to it when he wore the jersey to game 1.

Game 1: Drake wears the arm band to hide his tattoos

As most Drake fans know, the rapper is a huge basketball fanatic — so much so that he’s overtly supported many successful teams and players, despite being an official ambassador of the Toronto Raptors. This has included seemingly getting the player numbers of Steph Curry and Kevin Durant, both of whom play for the Golden State Warriors, tattooed on his arm.

Steph’s number, 30, is accompanied by the word “gifted,” a nod to Drake’s glowing reference to Curry’s talent in his song “Still Here.” Durant’s number, 35, is flanked by the word “snipe,” which refers to KD’s nickname and Instagram handle, Easy Money Sniper. Drake, perhaps now realizing how his loyalty to the Raptors might be called into question with tattoos for the star players of the opposing team, sought to hide his ink with an arm band.

Drake’s attire wasn’t the only way he tried to get under the Warriors’ skin for game 1, however. Ahead of the start of the finals, Warriors player Klay Thompson was asked whether or not he would be listening to Drake during the playoffs. Thompson, in his typical laconic fashion, stated that he would skip a Drake track if it was a “bad song,” noting that he liked Drake as a talented musician but not as a Raptors fan.

“If it’s one of his soft R&B songs, Imma skip it because I’m in kill mode right now, trying to get these four games so I’ll skip ‘Hotline Bling’ or anything along that line.”

Drake appeared to have taken note of Thompson’s disdain for his soft songs, because he baited the Splash Brother with his best and most meme-worthy “Hotline Bling” dance moves after Thompson picked up a technical foul.

But Drake’s most blatant sideline antics came at the end of the night, when he appeared to call Draymond Green “trash” to his face following the Raptors’ game 1 victory, according to People. Green, who’s name-checked in a positive way in Drake’s song “Summer Sixteen,” said at a previous press conference that he wasn’t concerned with Drake’s behavior during the finals.

“Drake can’t shoot. Nor can he pass. You ever seen Drake play basketball?” he said. “I really don’t care.”

Not even President Barack Obama gracing Toronto with his presence for game 2 could distract from Drake’s trolling during the second game of the 2019 NBA Finals. For this game, Drake made a custom sweatshirt with Macaulay Culkin’s face on it, along with the caption, “Where’s Kevin?” — a pointed reference to the fact that Kevin Durant, widely considered one of the best players in this year’s finals, has been injured for most of the series. While KD has yet to address the hoodie, it caught the attention of the Kevin who was featured on the clothing, with Culkin sending out a tweet about it and addressing Drake directly.

KD, it seems, had plenty to say to Drake after the Warriors took game 2 in Toronto. As the rapper left the arena, Durant was waiting to say his piece, alongside his teammate Klay Thompson.

“See you in the Bay, Aubrey,” Durant said, before calling out Drake’s previous trash talk.

Game 3: Drake responds to the Warriors playing Pusha T’s diss track about him, ‘The Story of Adidon’

While Drake didn’t attend game 3 of the NBA finals in the Warriors’ Oracle arena, his presence was still felt. This was especially true when the Warriors did some trolling of their own by playing Pusha T’s blistering diss track about Drake, “The Story of Adidon” before the game while Steph Curry warmed up.

When the Raptors secured the game 3 victory, however, it was Drake who had the last laugh, taking to his Instagram stories to troll Klay Thompson, who was unable to play in the game due to injury.

After the Raptors won game 4 in Oakland on Friday night, Drake, who was absent at the game, took to Instagram to troll Draymond Green’s outfit choice for the game. While the Instagram video made fun of Green’s fashion, Drake’s caption was even more inflammatory, with the rapper making the claim that “the real warriors are in the 6.”

Game 5: Warriors fan reminds Drake of his old ways with a billboard ahead of Game 5 in Toronto

Warriors fan Eric Ruiz put up a billboard in Toronto using Drake’s lyrics from his 2011 song, “The Motto,” to remind the rapper about his love for the Bay Area ahead of Game 5. Drake filmed the music video for “The Motto” in front of the Golden Gate Bridge and the San Francisco Bay Area, while paying tribute to legendary Bay Area rapper Mac Dre in the lyrics of the song: “Rest in peace, Mac Dre/Imma do it for the Bay.” 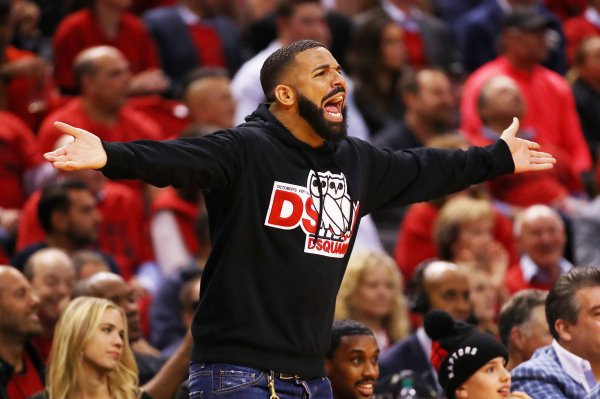 Toronto Raptors Superfan Drake Gets Warning About Sideline Behavior Ahead of the 2019 NBA Playoffs
Next Up: Editor's Pick