Larry the Downing Street cat sits underneath The Beast, the armored Cadillac of U.S. President Donald Trump, in Downing Street in London on June 4, 2019, on the second day of their three-day State Visit to the U.K.
Daniel Leal-OlivaS—AFP/Getty Images
By Jasmine Aguilera

“Chief Mouser” Larry the Cat briefly stole the show during President Donald Trump’s visit to the U.K. Tuesday, after deciding to rest under the President’s limo.

Larry, a famous cat who lives around 10 Downing Street, the official residence of the Prime Minister of Great Britain, is known as the “Chief Mouser to the Cabinet Office.” He’s used to national attention and crashing press conferences — he photobombed Trump’s photo-op with Prime Minister Theresa May earlier the same day. But this time, his antics caused a brief delay in the President’s schedule until he finally decided to move out from under “the Beast,” Trump’s security limo, according to journalists who photographed the furry scene.

Larry has been living at 10 Downing Street since Feb. 2011 after being recruited from Battersea Dogs & Cats Home for his exceptional mouse hunting skills, according to his official bio.

“Larry spends his days greeting guests to the house, inspecting security defenses and testing antique furniture for napping quality,” it reads. “His day-to-day responsibilities also include contemplating a solution to the mouse occupancy of the house. Larry says this is still ‘in tactical planning stage.'”

Larry’s relaxing break under “the Beast” happened midway through Trump’s three-day visit to the U.K. to commemorate the 75th anniversary of the 1944 D-Day landings. Trump has met with Queen Elizabeth II, members of the Royal Family and held a joint press conference with May while on his visit.

Others, including London Mayor Sadiq Khan, have also attempted to impede Trump’s visit, if not so literally. Thousands of protesters have also been marching against the President — even parading with the infamous ‘Baby Trump’ balloon — but none successfully completed as sly a sit-in as Larry. 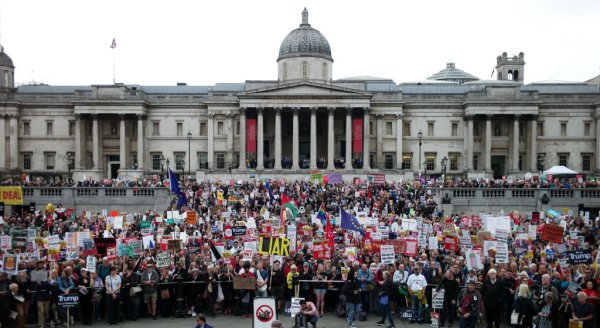