'Stone Cold Loser.' Trump Lashes Out at London's Mayor Before Touching Down in Britain

President Donald Trump delivered an aerial assault aimed at London mayor Sadiq Khan Monday morning, calling him a “stone cold loser” as he landed in the U.K. to begin a three-day state visit.

Trump sent the tweet as Air Force One prepared to land at London’s Stansted Airport. “Sadiq Khan, who by all accounts has done a terrible job as Mayor of London, has been foolishly “nasty” to the visiting President of the United States,” he wrote.

The President’s comments came after Khan said it would be “un-British” to roll out the red carpet for Trump, and that he would boycott the visit.

A spokesperson for Khan responded to the President’s comments on Monday: “This is much more serious than childish insults which should be beneath the President of the United States. Sadiq is representing the progressive values of London and our country warning that Donald Trump is the most egregious example of a growing far-right threat around the globe, which is putting at risk the basic values that have defined our liberal democracies for more than 70 years.”

Trump’s tweets are the latest barbs in a long-running spat between the pair. In 2016, Khan, who is Muslim, criticized Trump’s campaign proposal to ban all Muslims from entering the United States, calling his views on Islam “ignorant.” In response, Trump challenged Khan to an IQ test. “I will remember those statements. They are very nasty statements,” Trump said.

A year on, after the deadly terrorist attacks in London in 2017, the feud escalated. Khan had told Londoners that they would see an increased police presence on the streets as a precaution after the violence, and to not be alarmed. Trump then tweeted: “At least 7 dead and 48 wounded in terror attack and Mayor of London says there is “no reason to be alarmed!”

A spokesperson for Khan later told reporters: “He has more important things to do than respond to Donald Trump’s ill-informed tweet that deliberately takes out of context his remarks urging Londoners not to be alarmed when they saw more police―including armed officers―on the streets.”

Then, when Trump visited London in 2018, Khan gave the green light for a “Trump Baby” balloon to fly outside the Houses of Parliament at a protest. Trump said the balloon, which depicts him as an orange baby in a diaper, made him feel “unwelcome” in London.

Trump then doubled down on his attacks on Khan over terrorism. “Take a look at the terrorism that is taking place. Look at what is going on in London. I think [Khan] has done a very bad job on terrorism,” Trump said.

Now, as Trump arrives in London, the spat shows no sign of cooling down. “This is a man who tried to exploit Londoners’ fears following a horrific terrorist attack on our city,” Khan wrote in an op-ed published over the weekend. “Rather than bestowing Trump with a grand platform of acceptability to the world, we should be speaking out and saying that this behavior is unacceptable.” 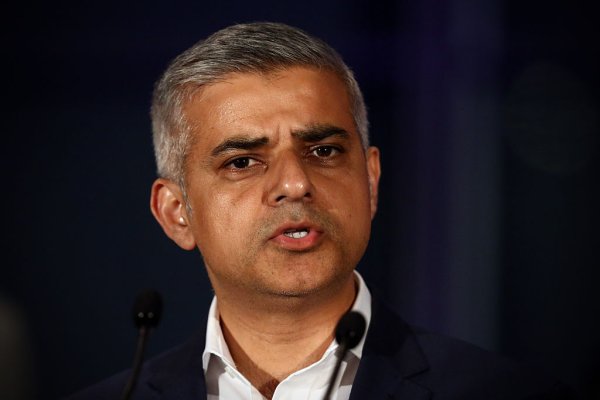