Activists in London today unveiled a six-meter high balloon portraying Donald Trump as an orange baby in a diaper, ahead of the U.S. president’s upcoming trip to the United Kingdom on July 13. The visit is expected to draw huge crowds in protest.

“This is how the world sees him,” says Leo Murray, 41, the British environmentalist who came up with the idea to make the balloon. “This is what we tried to do here, encapsulate in a very simple graphic metaphor, what the world understands Donald Trump to be.”

Activists say they are still in talks with London authorities over whether the balloon will be allowed to fly over Parliament Square, in central London, at the same time as planned protests there against Trump, which 200,000 people say they are interested in attending according to the Facebook event.

A six-meter high balloon depicting a baby Donald Trump in a diaper was unveiled June 26 in London, ahead of the U.S. President's July 13 visit to the U.K.
Billy Perrigo—TIME

The balloon is being crowdfunded online. As of Tuesday, the campaign had raised close to $13,200 from 718 people, well over the initial goal of $2000. It costs about $1,050 to fill the balloon with helium but activists said the surplus funds could be used to take the balloon to the United States.

“We’re hoping the extra money is going to allow Baby Trump to go on tour, to visit the United States but also other assorted locations around the world where Donald Trump may be going,” says Murray. “Hopefully Baby Trump is going to start haunting him, following him around.”

But they also expressed fear that Baby Trump might become a target, saying Twitter trolls had already threatened to shoot the balloon down.

Prime Minister Theresa May was the first world leader to invite President Trump on a state visit after his inauguration in 2017. But plans for a formal visit were shelved after lawmakers and over a million Britons objected in a petition.

A “working visit,” without the pageantry associated with a state visit, was then scheduled for February this year but canceled in January, after Trump expressed disapproval over the location of the new American embassy in London.

London Mayor Sadiq Khan said in response that Trump had “got the message” that Londoners were hostile to his policies and opposed him coming to the capital.

Now, Trump finally looks set to visit the U.K. in July. His itinerary remains confidential, although he will reportedly meet the Queen and Theresa May. 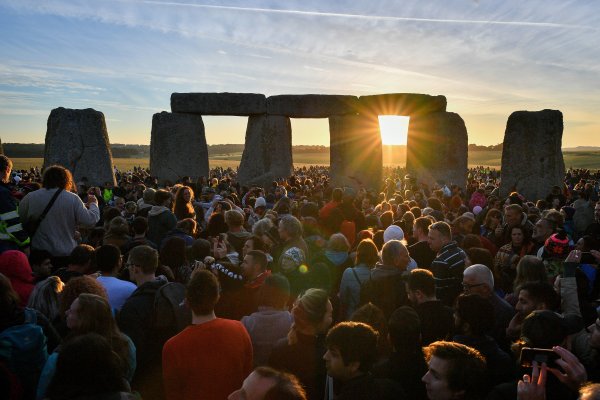 Summer Solstice Celebrated at Stonehenge
Next Up: Editor's Pick