The Best, Worst and Most Surprising Moments of the 2019 Golden Globes

The 76th annual Golden Globes are officially behind us, and the night was, as ever, one of stars, champagne and Jeff Bridges rambling on about Buckminster Fuller. Co-hosts Sandra Oh and Andy Samberg made an effort, though many of their bits failed to register—and, perhaps for the best, the pair mostly faded into the background as the night wore on.

Much will be made of the winners and what their victories mean for the Academy Awards, which take place on Feb. 24. In the meantime, here’s the good, the bad, the ugly—and the Dudely—from the 2019 Golden Globes.

Best Normal Among the Stars

This year’s Golden Globes red carpet was won by a young woman serving up Fiji Water on a platter in the background of nearly every celebrity photo.

There was a lot of goodwill directed toward Andy Samberg and Sandra Oh in anticipation of their hosting gig, given their general likability both individually and as a duo. But the jokes in their monologue — a faux-roast of nominees by their alter egos, “Sandra Oh Snap” and “Andy Slams-Nerds,” fell flat. The monologue was at least partially saved, though, when Oh got sincere at the end, explaining why she took the job in the first place.

When calling Emma Stone, Olivia Colman and Rachel Weisz to the stage to present their movie, The Favourite — a presentation full of sexual innuendo, through which they giggled nonstop — Oh introduced them as the stars of the upcoming Three Stooges reboot. We’ll take it.

Worst Reminder to Get Your Flu Shot

About 45 minutes into the broadcast, Oh and Samberg appeared onstage explaining that it was time for them to do a silly gag. They would have ordered everyone pizza, à la Ellen at the Oscars in 2014, but since everyone had already been served dinner, they instead opted to have a bunch of supposed doctors in white coats emerge from backstage to offer free flu shots. The stars in the room looked genuinely confused, but sure, while we’re on the subject—everyone remember to get vaccinated!

This year, the HFPA gave its first ever honorary award for achievement in television to Carol Burnett, for whom they also named the award. Steve Carell introduced the comedy legend — the most decorated person of all time in Golden Globes TV categories — and the audience was treated to not only a truly (deservedly) long montage of clips of her work on The Carol Burnett Show and elsewhere, but a genuine and heartfelt speech which she dedicated mainly to the musicians, cue card holders and fellow actors who made her show happen.

When Regina King won Best Supporting Actress for Barry Jenkins’ If Beale Street Could Talk, her date — her son Ian — danced a victory dance for his mom. In her speech, King brought him up in thanking Jenkins: “Thank you for giving us a film that my son said, when he saw it, that it was the first time he really saw himself.”

King was also one of few people who meaningfully addressed the #MeToo movement during the evening. She pledged, for the next two years, for all of the projects she produces to be made up 50% of women and challenged “anyone out there who is in a position of power, not just in our industry, in all industries, to stand with us in solidarity and do the same.”

Keeping with the theme of filial love, when host Sandra Oh won Best Actress in a Television Drama for her role in Killing Eve, her father leapt out of his seat, bursting with pride. She finished her speech by thanking her parents and bowing to them. The love was palpable.

Best Presenters Who Might Also Be Available to Host Next Year

Amy Poehler, who has hosted the Globes three times with Tina Fey, presented two awards alongside her former Saturday Night Live alumna Maya Rudolph. After presenting the first one, to Mahershala Ali for Best Supporting Actor in Green Book, Poehler cracked, “We’re still here.” And the audience didn’t mind. Then Rudolph, feigning extreme anxiety, mock-proposed to Poehler (a play on the Oscars director who proposed to his girlfriend when he won an Emmy last year), who said yes. Might they say yes to hosting next year’s Globes or, for that matter, this year’s Oscars?

While accepting the award for Best Actor in a Comedy or Musical, Christian Bale, who plays Dick Cheney in Vice — and who all of Twitter apparently forgot is not American but Welsh — thanked his wife for giving him their beautiful children, “Burrito and Banana” and thanked Satan for giving him inspiration for his character.

After rousing speeches by Cecil B. DeMille winners Oprah Winfrey and Meryl Streep at the last two years’ Golden Globes, Jeff Bridges’ acceptance speech felt more like the kind of lovefest that takes place around a campfire after a joint has been passed around (or maybe a few White Russians have been downed). Charming, low-key, apolitical and seemingly unrehearsed — if you found your attention drifting, you may have perked back up to find him talking about geodesic domes — the speech at least confirmed that Bridges continues to embrace his most enduring role, from the Coen Brothers’ The Big Lebowski: “If I’m lucky, I’ll be associated with the Dude for the rest of my life.”

Olivia Colman won Best Actress in a Comedy or Musical for her portrayal of Queen Anne in The Favourite. In her speech, the British actress — who will portray another royal, Queen Elizabeth II, in the Netflix series The Crown — referred to costars Emma Stone and Rachel Weisz as “my bitches,” and couldn’t remember anything she really wanted to say, but appeared so humbly delighted to have won that she didn’t seem remotely bothered.

Most Wet Faces in the House

Glenn Close, winning the Golden Globe for Best Actress in a Drama, brought tears to a lot of eyes in the audience (and, err, at home) when she accepted a Golden Globe for her performance in The Wife. (“I think that’s why it took 14 years to get made,” she quipped about the film’s title.) Drawing a comparison to her character in the adaptation of the Meg Wolitzer novel, Close spoke about her own mother, who said in her 80s that she felt she hadn’t accomplished anything in her life. Women may be expected to nurture, said Close, but “we have to find personal fulfillment,” she urged. “We have to follow our dreams.”

The night ended with the Golden Globe for Best Picture – Drama going to the Freddie Mercury biopic Bohemian Rhapsody (immediately following a Best Actor win for star Rami Malek). Although it wasn’t a great surprise coming from the HFPA, which doesn’t necessarily align its voting with critical reception (Bohemian Rhapsody was easily the worst reviewed contender in the category), it certainly was a surprise that the movie won two Globes when A Star Is Born, nominated for five, won only one (Best Song).

On top of that, many observers were unsettled by the victory of a film, particularly in the midst of the #MeToo movement, whose credited director, Bryan Singer, has been accused of rape and sexual harassment, all of which he has denied. Singer, who was fired before the film was finished, officially for “unexpected unavailability” but reportedly due to behavioral issues, was not present at the ceremony. 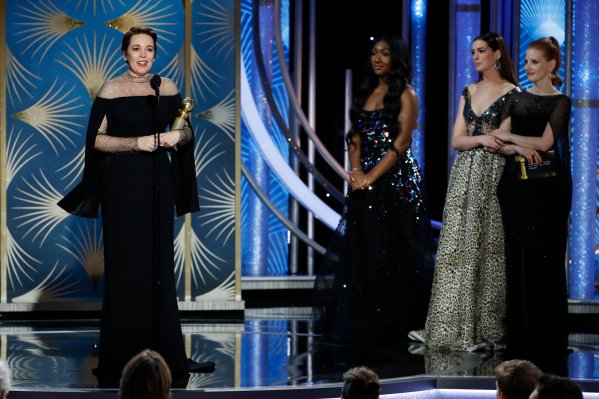 People Love How Olivia Colman Thanked Her Favourite Co-Stars Emma Stone and Rachel Weisz at the Golden Globes
Next Up: Editor's Pick