At Monday night’s 70th Primetime Emmy Awards, comedian Emily Heller made sure to send a nod and a wink in the direction of at least one of those red carpet photographers — in the form of her choice of handbag. Heller, who was nominated for her writing on Bill Hader’s comedy Barry, twirled and posed for the cameras while carrying a grey bag emblazoned with the Getty Images logo.

The inside joke: all Getty Images photos have a grey watermark across them, just about where a handbag falls on a typical red carpet picture. So Heller’s cheeky fashion choice was both a spot-on visual gag, a fun critique of the red carpet system and a shout-out to the very photographers snapping her photo. (Of course, we imagine the look was slightly less hilarious for non-Getty photographers, who were reminded of the cultural supremacy of that particular photo agency when it comes to things like celebrity snapshots. But you can’t win ’em all, as Heller herself admitted in her Instagram caption for the look.)

Being a red carpet photographer can be a tough gig. You wait around for hours in a cramped space, crowded with other photographers jostling for prime position, lugging around and setting up heavy equipment. When celebrities finally arrive, you have to convince them to look in your direction, all to get just one perfect shot for your outlet. It’s an often thankless task.

In any case, cheers to Heller for turning what could have been a forgettable red carpet moment into a smart — and funny — fashion stunt. She may not have won the Emmy, but she did steal the red carpet show. 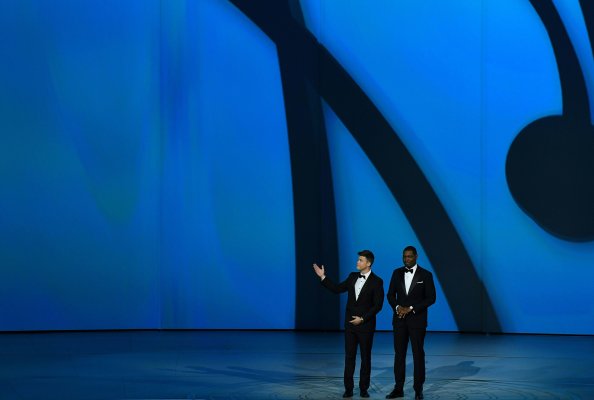 TV Is More Vital Than Ever. Too Bad No One Told the Emmys
Next Up: Editor's Pick