One of the more fun events of the awards season, the 2018 MTV Video Music Awards, is almost here. Rap artist Cardi B leads the nominations with 10 including Video of the Year and Artist of the Year. Behind her with eight nominations are power couple the Carters (aka Beyoncé and Jay-Z) and rounding out the pack are Childish Gambino and Drake who both have seven nominations.

Don’t expect too many changes to the awards show from last year’s event. MTV is still keeping the gender neutral categories, but they are swapping the “Fight Against the System” category for this year’s “Video with a Message.” “Best Latin Video of the Year” is also new, perhaps in response to criticism after last summer’s Spanish-language massive hit “Despacito,” which was initially not nominated for an award. MTV is also introducing a new category “Push Artist of the Year” to highlight emerging artists like Noah Cyrus and Hayley Kiyoko.

With 2017’s big winner Kendrick Lamar out of the race this year, it could be anyone’s night to take home the top prize, the moon man.

Below is your guide on the 2018 VMAs from where to watch the show to who will win.

When are the VMAs?

The awards show will kick off Monday, Aug. 20 with a red carpet pre-show live on Twitter at 7:30 p.m. EST with hosts Justina Valentine and Winnie Harlow. Then turn on MTV to catch the rest of the pre-show at 8 p.m. EST hosted by Jersey Shore stars Pauly D and Vinny Guadagnino alongside Terrence J and Nessa.

How can I watch the show?

At 8 p.m. EST you can tune into watch the 2018 MTV VMAs pre-show on both MTV and online at MTV Live. This vamp up to the actual awards show will feature performances from Bazzi, Bryce Vine and the much-hyped Backstreet Boys, who are making their first appearance at the VMAs in exactly 20 years as presenters later in the broadcast.

MTV will begin broadcasting the 2018 VMAs at 9 p.m. EST. You can also catch the show live on VH1, Comedy Central, BET and CMT. If you’re not near a television or want to watch on another device, you can go to MTV Live and log-in using your cable provider to watch the livestream.

The VMAs will be held at Radio City Music Hall for a record 12th time, returning to the New York City venue for the first time since 2009.

Even without a host (which means no joke-filled monologue), you can still expect a night of laughs, costume changes and the occasional awkward banter between presenters.

Look out for 2018’s hip-hop queen Cardi B, who just won best female hip hop artist at the 2018 BET Awards. She’s up for her solo project “Bartier Cardier” as well as her collaborations “Finesse” with Bruno Mars and “Dinero” with Jennifer Lopez and DJ Khaled. Her big competition — in major categories like Video of the Year and Song of the Year — would be the Carters, who are nominated for their video ‘APESH-T.’

This is Beyoncé’s first time nominated for a VMA since 2016, where she broke the record and became the most awarded VMAs artist in history. With 22 wins (that’s more than Madonna), Beyoncé could break her own record. This won’t be too difficult, as the second-highest VMA award holder, Eminem, is far behind at 12.

So what videos should I watch to get up to speed?

Start with the most nominated video. The Carters’ “APESH-T,” is an artistic feat: they shut down the Louvre in order to film the video. That nabbed eight nominations. Their biggest competition might be Childish Gambino, whose “This is America” video stirred conversation with its explicit violence and commentary on the state of the country. Also make sure to watch “God’s Plan.” It’s got more than 770 million views on YouTube, and for good reason: the video shows Drake donating the entirety of its million dollar budget during the music video. It’s also worth throwing Taylor Swift a view, — even though her video “Look What Made Me Do” was shut out of all the major categories — she was nominated for three other awards (and her video has more than 950 million views).

The most nominated artist of the night, Cardi B, will be opening this year’s VMAs. Ariana Grande, who is up for Artist of the Year, will also be performing just days after her new album “Sweetener” is released. The 20-year-old pop star Shawn Mendes, who made his VMAs debut last year, is back to sing his thrice nominated hit “In My Blood.” Rap sensation Logic is set to perform the worldwide debut of his song “One Day,” his new collaboration with OneRepublic’s Ryan Tedder. You can also expect a big showing from Jennifer Lopez, the winner of this year’s Vanguard Award, likely of her hits over the years.

MTV has also promised a performance from Nicki Minaj, who will be singing from a surprise “iconic” location in New York City. Other familiar faces at Radio City will include rap artist Travis Scott, Artist of the Year nominee Post Malone and rock band Panic! At The Disco.

This year is also the debut of the PUSH Artists Stage where PRETTYMUCH, Hayley Kiyoko, Jessie Reyez and Juice WRLD are slated to perform. 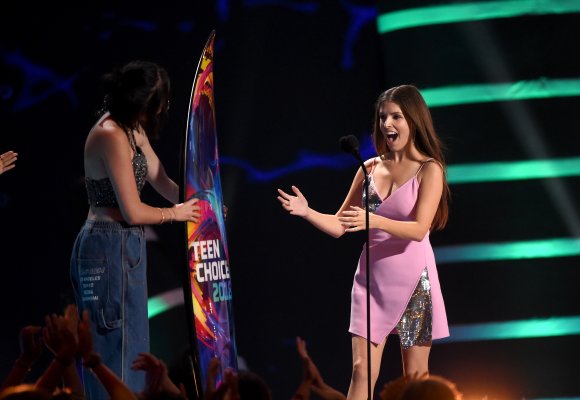