Everything to Know About Meghan Markle's Wedding Ring

It’s official: Prince Harry and Meghan Markle are husband and wife, a moment that marked by the exchange of rings during their royal wedding ceremony at St. George’s Chapel in Windsor Castle on Saturday, May 19.

Markle has been rocking her diamond engagement ring since Harry proposed back in November, but the wedding ring is, of course, a whole other story. Markle received a simple Cleave and Company wedding band. Following in Windsor family tradition, it’s fashioned from a piece rare Welsh gold from the Queen. A practice his great grandmother, Queen Elizabeth the Queen Mother, kicked off in the early 20th century, royal brides in the family are gifted wedding bands crafted from nuggets of Welsh gold from the now-defunct Clogau St. David’s Gold Mine. Because gold mining is currently inactive in Wales, the gold is especially valuable.

Markle is in good company with her newest accessory: the Duchess of Cambridge Kate Middleton, Camilla, Duchess of Cornwall, Princess Diana and the Queen have all also worn the Welsh gold rings.

The wedding band joins her engagement ring, which also has yellow gold for a band, and features diamonds from a Botswana mine and from Princess Diana’s own collection. 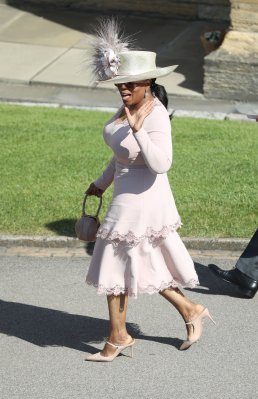 Oprah Winfrey Delightfully Surprised Everyone By Rolling Up to the Royal Wedding
Next Up: Editor's Pick