Iconic Italian fashion designer Donatella Versace confirmed that she’s a living legend when she took to the red carpet at fashion’s biggest night, the 2018 Met Gala in New York City on Monday night.

Versace, who came fabulously attired in an ornate navy and gold dress of her own design, was a co-host for the event, alongside Vogue editor-in-chief Anna Wintour, Rihanna, and Amal Clooney. Of course, Donatella, never one to heed convention, ensured that her dress was anything but average by choosing a sweeping overskirt style that cut open dramatically in the front to show off a mini dress and over-the-knee high heel boots. The elaborate gold embroidery paid homage to the theme of the gala, Heavenly Bodies: Fashion and the Catholic Imagination.

Although the designer has long been an influencer for the fashion industry, she’s also been a major fixture in pop culture; in the past, she’s appeared as herself in the fashion-focused comedy, Zoolander and has even been the inspiration for an eponymous song by Lady Gaga. Many will also recognize Donatella from the television series, American Crime Story, the most recent season of which details the assassination of her late brother Gianni Versace. 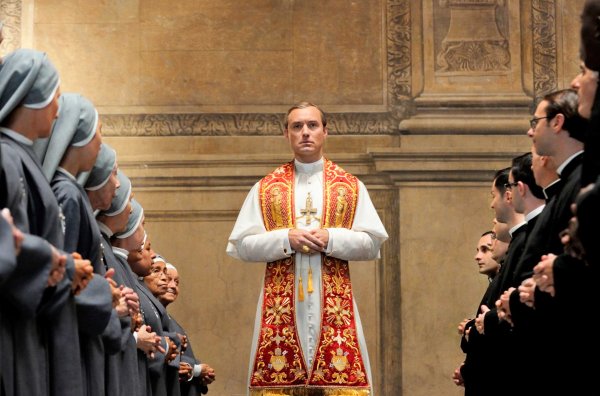 The 2018 Met Gala Has Blessed Us With an Influx of Young Pope Jokes
Next Up: Editor's Pick