Leave it to Leonardo DiCaprio to continually reinvent the concept of “going incognito.”

During the first weekend of the annual Coachella Music Festival this year — headlined by Beyoncé — DiCaprio made a rare public appearance, this time popping up at the famous after party known as Neon Carnival. As usual, celebrity chameleon DiCaprio could be found decked out in a nondescript hoodie and baseball cap, his usual everyman uniform. But people might do a double-take at his choice of eyewear: 3D glasses, like the kind you wear to a movie theater when you pay a few dollars extra for the special effects. You know just the type. Usually moviegoers are encouraged to return their glasses at the end of a film and recycle them for future use, but perhaps DiCaprio decided to pocket his for later partying.

According to Cosmopolitan, however, the glasses are actually from a brand called “Hi-Lites,” and they’re meant for out-of-theater use. When you wear them they turn every light you look at into a different shape, and his choice for the Coachella festivities transformed his environs into a sea of neon smiley faces, they report. Leo: always setting trends in living one’s very best life. 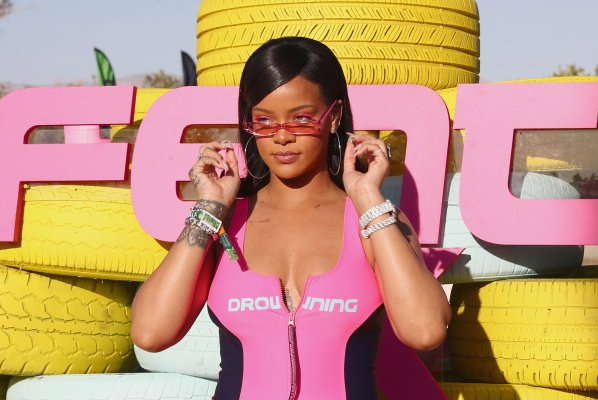 Rihanna Was Almost Unrecognizable At Coachella
Next Up: Editor's Pick