“I didn’t say he punches back on every single topic,” White House Press Secretary Sarah Sanders said Tuesday of Trump’s combative style, before swiping at the reporters assembled in the briefing room: “If he did, he would probably be addressing a lot of the stories you guys write every single minute of every single day. He also has a country to run.”

Daniels, whose legal name is Stephanie Clifford, says she received a $130,000 payment days before the 2016 presidential election to keep quiet about her alleged 2006 affair with Trump. Daniels is seeking to invalidate a nondisclosure agreement, and recently expanded her lawsuit to include Trump’s attorney Michael Cohen, who she says has defamed her.

As Daniels’ lawsuits and titillating details about her encounters with Trump continue to garner publicity, the President has stayed uncharacteristically quiet about the matter. In the past, Sanders has said, “When the President gets hit, he’s going to hit back harder,” and Melania Trump’s office has espoused the same sentiment. At the time of this defense, Trump was waging a personal Twitter war with MSNBC’s Morning Joe co-hosts Joe Scarborough and Mika Brzezinski, which included a tweet referencing Brzezinski “bleeding badly from a facelift.”

The situation with Daniels has, so far, received a more tempered response. Through White House spokespeople, Trump has denied Daniels’ claims. “With respect to that interview, I will say the President strongly, clearly and has consistently denied these underlying claims,” White House Deputy Press Secretary Raj Shah said Monday. “The only person who has been inconsistent is the one making the claims.”

But the story has even attracted comment by former President Jimmy Carter, who told CBS on Tuesday he thinks the story will hurt Trump. “I think most people want a President who they trust to tell the truth always, and who has some basic moral values, including loyalty to his own wife,” he said.

Responding to Carter’s barb, Sanders argued that Trump’s voters supported him for policy reasons, and that they’re still loyal to him. “I think the people that voted for and came out and supported him still do so, and do so because they believed in the agenda he was driving,” she said. “He’s been delivering on that since he came into office.” 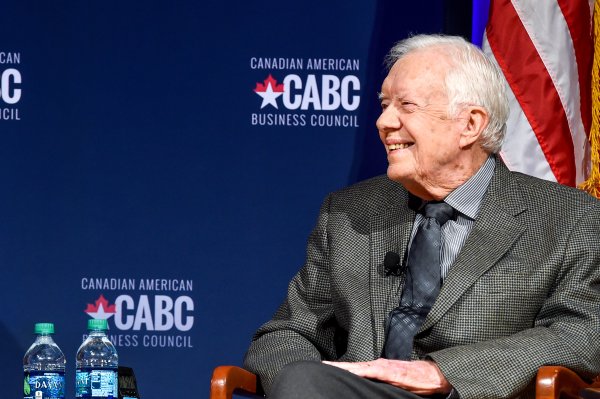 Jimmy Carter Says Stormy Daniels Scandal Will Hurt President Trump Because of Outrage for Melania
Next Up: Editor's Pick