Emma González's Stunning Silence for Parkland: The Latest on March for Our Lives

Hundreds of thousands of protesters filled the streets of Washington, D.C., on Saturday for March for Our Lives, calling for action on gun control and school safety reform.

In the weeks since 17 people were killed by a gunman at Marjory Stoneman Douglas High School, students around the country — following the lead of survivors in Parkland, Florida — have walked out of their classrooms to protest gun violence, lobbied lawmakers to pass gun reform legislation, and planned Saturday’s mass demonstration.

As students and adults gathered in Washington, D.C., on Saturday morning, more than 800 sibling rallies were set to take place in cities around the world, according to the protest website. Protesters in Washington, New York City and Boston lined up early Saturday, braving unseasonably cold temperatures in the low 40s.

The main stage at the end of March for Our Lives, with the U.S. Capitol in the background, featured music superstars including Miley Cyrus, Ariana Grande and Jennifer Hudson performing in between speeches by Parkland students. But organizers, in an effort to make their message more inclusive, also asked students from Chicago and Washington, D.C., to speak about how they have been impacted by gun violence.

Perhaps the most powerful was 11-year-old Naomi Wadler, who told the crowd: “I am here today to acknowledge and represent the African-American girls whose stories don’t make the front page of every national newspaper.”

The March for Our Lives was billed as a rally for young people, but the turnout in the nation’s capital was a cross-section of the country: students, yes, but also their parents, and adults without children, from places as far as Boston and Seattle and Los Angeles. The crowd was massive, stretching from the foot of the Capitol down Pennsylvania Avenue toward the White House.

At the march in New York City, the crowd was dominated by students, ranging from small children to college students. But there were also adults of every age, many of whom brought their children to the rally.

The White House released a statement supporting the student protesters. “We applaud the many courageous young Americans exercising their First Amendment rights today. Keeping our children safe is a top priority of the President’s, which is why he urged Congress to pass the Fix NICS and STOP School Violence Acts, and signed them into law,” Deputy Press Secretary Lindsay Walters said in a statement Saturday. “Additionally, on Friday, the Department of Justice issued the rule to ban bump stocks following through on the President’s commitment to ban devices that turn legal weapons into illegal machine guns.”

President Trump, at his golf resort in Mar-a-Lago, Florida, tweeted about Friday’s terrorist attack in France on Saturday morning, but was silent on the march.

Meanwhile, young people took the stage blocks from the White House, calling on elected officials to do more to stop gun violence.

“My grandfather had a dream that his four little children will not be judged by the color of their skin, but by the content of their character,” said 9-year-old Yolanda Renee King, the granddaughter of Martin Luther King Jr, to a cheering crowd. “I have a dream that enough is enough. And that this should be a gun-free world. Period.”

In an interview with CNN later, alongside her father Martin Luther King III, she said her school had a lockdown drill on Friday. “We do all these lockdown drills because it’s unfortunate that people have guns and they use them to hurt people,” she said.

David Hogg, a Marjory Stoneman Douglas student and one of the leaders of the #NeverAgain movement, called on the crowd to focus on upcoming midterm elections, urging first-time voters to head to the polls and railing against lawmakers who accept donations from the National Rifle Association.

“We are going to make this the voting issue. We are going to take this to every election, to every state and every city,” Hogg said. “When politicians send their thoughts and prayers with no action, we say, ‘No more.’ And to those politicians supported by the NRA, that allow the continued slaughter of our children and our future, I say get your resumes ready.”

“We will not stop until every man, every woman, every child and every American can live without fear of gun violence,” he added.

Emma González — the student whose emotional speech just days after the Parkland shooting went viral — stood silent on stage for more than four minutes, tears streaming down her face, as she marked the length of time of the shooting rampage.

“In a little over six minutes, 17 of our friends were taken from us, 15 were injured, and everyone — absolutely everyone in the Douglas community — was forever altered,” she said. “Everyone who has been touched by the cold grip of gun violence understands.”

“Fight for your lives before it’s someone else’s job,” she said, breaking her silence.

Cameron Kasky, another #NeverAgain leader, called on the crowd to “create a better world” for future generations.

“Look around, we are the change,” he told the cheering crowd.

“My generation — having spent our entire lives seeing mass shooting after mass shooting — has learned that our voices are powerful and our votes matter,” he said. “We must educate ourselves and start conversations that keep our country moving forward and we will. We hereby promise to fix the broken system we’ve been forced into and create a better world for the generations to come. Don’t worry, we’ve got this.”

Kasky read aloud the names of the students and teachers who were killed in the shooting at his high school last month, pausing to wish senior Nicholas Dworet a happy birthday. The aspiring Olympic swimmer would have turned 18 on Saturday.

At the end of her speech, Parkland shooting survivor Sam Fuentes led the crowd in singing happy birthday to Dworet, bringing many to tears.

Students, parents and community members also rallied in Parkland, Florida — where students performed emotional tributes to their classmates, and family members of the shooting victims spoke.

The Miami Herald reported tens of thousands of people turned out for the rally and march in the Florida community where a mass shooting started the movement. They gathered at a park near Marjory Stoneman Douglas High School.

Parkland student Autumn McKinney told the Herald what she wants alleged gunman Nikolas Cruz to know: “Even though he did something terrible, it started something amazing. He didn’t win.”

Celebrities join students at the march

While student activists took the stage to deliver impassioned calls to action, celebrities joined the crowd and showed their support for the cause as well. Paul McCartney marched in New York City, honoring fellow Beatle John Lennon, who was shot and killed in the city in 1980. Miley Cyrus, Kim Kardashian-West and George and Amal Clooney were among those who participated in Washington, D.C.

With reporting by Nash Jenkins/Washington, D.C. and Alana Abramson/New York 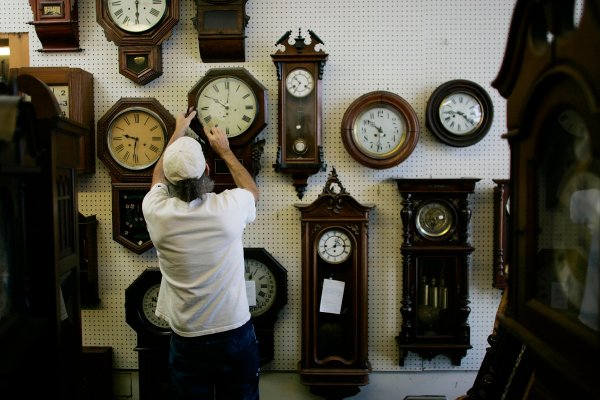 Daylight Saving Time Could Soon Be Year-Round in Florida
Next Up: Editor's Pick