Students Are Walking Out Over School Shootings. Can Schools Punish Them?

Hundreds of students marched out of a New Jersey high school this week to protest the recent suspension of a teacher who discussed school security with his students in the wake of the shooting in Parkland, Florida.

Timothy Locke, a history teacher at Cherry Hill High School East in New Jersey, told Philly.com that he was placed on administrative leave last week because a student was upset by his discussion of the Parkland shooting, including his comment that a similar incident could happen at their own high school. “The bottom line is that I was very concerned about the security at my school,” Locke told Philly.com. “I was adamantly concerned with the welfare of my students.”

Locke did not respond to requests for comment on Tuesday. Students said administrators initially threatened to suspend them for protesting, but later promised to listen to their concerns about school safety. Locke has not yet returned to the school, and Barbara Wilson, a spokesperson for Cherry Hill Public Schools, said she could not comment on personnel matters.

The situation highlights questions about whether it’s legal for schools to discipline students and teachers for protesting and speaking out in the wake of the shooting at Marjory Stoneman Douglas High School this month, which left 17 people dead and reignited the gun control debate in America. Students and teachers around the country are planning walkouts, teach-ins and other protests in coming weeks to push for solutions to prevent future school shootings. But some school districts have already threatened to suspend students who walk out, and many prestigious colleges have responded by assuring prospective students that protest-related suspensions would not affect their admission.

Legal experts say students generally retain their right to free speech unless it disrupts the functioning of the school. “Students do not lose their rights to free speech at the schoolhouse gate,” said Vera Eidelman, a fellow in the ACLU’s Speech, Privacy, and Technology Project. “They can speak, they can wear expressive clothing, they can make their voices heard as long as it’s not disruptive in school. But all that said, because in most jurisdictions, students are required to go to school, schools can discipline them for missing class — for example, in a walk out.”

ACLU chapters in Virginia and Texas have sent letters to superintendents who have threatened to discipline students, arguing that “there is simply no evidence that being absent from class for a few minutes or even a day creates a substantial disturbance or disruption or infringes on the rights of other students.”

Eidelman, who will lead a virtual training on Thursday to help students understand their rights within these protests, encouraged students to look into policies for unexcused absences and suspensions in their district and state. While schools would be within their right to discipline students for walking out and accruing unexcused absences, she said it would be problematic if they did so inconsistently by disciplining students differently based on the content or political nature of their protest.

Justin Prechodko, a senior at Cherry Hill East who plans to attend Duquesne University next year, started the petition to end Locke’s suspension, and he was one of hundreds of students who walked out on Tuesday, shouting “Free Mr. Locke.”

“This man has been one of the most influential life figures to me,” said Prechodko, who is currently in Locke’s AP world history class. Prechodko said he was not in the same class as the student who was upset by Locke’s comments, but said Locke initiated a discussion about school shootings in his class, too, and asked students what they thought about the problem.

Prechodko said students were initially told they would face suspension or be barred from senior prom or graduation if they protested. Cherry Hill East Principal Dennis Perry later retracted the threat about senior events, and Wilson said Tuesday that none of the students who participated in the walkout would be suspended.

In a letter to the community on Tuesday, Cherry Hill Public Schools Superintendent Joseph Meloche encouraged students to find alternate forms of expression and discourse, calling walk outs “a deviation to our school’s standard supervision and safety procedures.” Perry also told students that the school is planning to hold assemblies on school safety and will help organize a student walk on March 14, in conjunction with a national school walkout.

For teachers — many of whom have followed the lead of their students in becoming more vocal about school shootings — the rules can be more complicated.

“Teachers don’t lose their First Amendment rights simply by virtue of taking on public employment,” Eidelman said, while noting that teachers could face consequences for speech or behavior that disrupts the school’s ability to perform an educational service. “Employers do have the ability to limit speech if it gets in the way of them administering public functions efficiently,” she said.

Inside their classroom, a teacher’s curricular speech is also more restricted.

“Public school teachers absolutely can speak out as private citizens on matters of public concern, but it gets trickier the closer their speech comes to the efficient functioning of their specific school — for instance, taking issue with something that their principal is requiring them to do,” Eidelman said. “Individuals are by far the most protected when they’re outside marching on the streets, engaging in protest on sidewalks and in parks. Public employees absolutely retain those rights in their capacity as private citizens.” 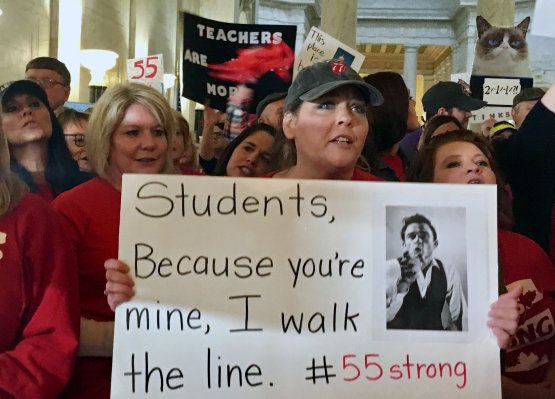 Here's Why West Virginia Teachers Are On Strike
Next Up: Editor's Pick