What to Know About the Closing Ceremony for the 2018 Winter Olympics: When, Where and How to Watch

By Alix Langone and Cady Lang

Every Winter Olympics goes by in the blink of an eye.

The 2018 Winter Games didn’t disappoint, leaving us with exhilarating highlights from Nathan Chen’s history-making 6-quad jump routine, to Shaun White winning America’s 100th Winter Olympics gold medal. The total Olympic medal count for the U.S. so far comes in at 23 medals, with the U.S. winning nine gold, eight silver and six bronze medals. Aside from the medal wins, breakout stars of this year’s Olympics include Adam Rippon and Gus Kenworthy, who are being hailed as LGBTQ role models and athletes. Not all the action has been in the competitions, however; First Daughter Ivanka Trump effectively stole the show when she arrived in PyeongChang ahead of the closing ceremony as the head of the U.S. delegation for the event. White House press secretary Sarah Huckabee Sanders will also attend the ceremony.

Here’s everything you need to know about PyeongChang’s closing ceremony, including when and where it will take place:

What time does the 2018 Olympics closing ceremony start?

There are also four final events you can watch before the closing ceremony kicks off, including men’s bobsledding, women’s cross-country skiing, women’s curling and men’s hockey.

How can I watch the Olympics closing ceremony?

If you have a paid TV subscription you can catch the Olympic closing ceremony on NBC primetime. You can watch live as the ceremony is happening at 6 a.m. E.T. or wait until later for the produced and edited broadcast at 8 p.m. E.T. Check out the network’s official TV listings page if you aren’t sure which channel to tune into.

You can watch the Closing Ceremony livestream on NBCOlympics.com and the NBC Sports app on your computer, your smart phone, tablet or connected TV through devices like Amazon Fire, Apple TV, Chromecast and Roku, but you have to be an authenticated user or borrow someone else’s cable login to watch. The live streaming site and app also both include a library of Olympic highlights and additional video content you can check out beforehand.

What will happen during the Olympics opening ceremony?

Most host countries use the Olympic closing ceremony to share their culture and heritage with the rest of the world, so you can expect to see performances showing off the best of what South Korea has to offer.

Olympic closing ceremonies are usually a show of international unity — as Olympic athletes from across the globe gather in the same stadium, representing the world coming together as “one nation” in a celebratory atmosphere, according to the Olympics website. (There have been other demonstrations of unity throughout the 2018 Winter Olympics including North and South Korea marching under the same flag during the Opening Ceremony.)

This year’s closing ceremony will take place at the PyeongChang Olympic Stadium, which was built specifically for the 2018 Winter Olympics and can hold around 35,000 spectators.

North Korea will also reportedly be sending a senior delegation to the closing ceremony, led by Kim Yong Chol, a senior North Korean party member linked to a pair of deadly attacks on the South in 2010.

Olympic host countries typically go all out for both the opening and closing ceremonies — and South Korea will likely be no different.

In 2012, the London Closing ceremony was jam packed with celebrity performances from fan favorites like the Spice Girls, Ed Sheeran, George Michael and One Direction, who paid tribute to English icons like the Beatles and Queen’s Freddie Mercury. When China made the Olympic hand off in 2008 to London, soccer star David Beckham kicked a ball into Bird’s Nest stadium and X-Factor’s Leona Lewis performed with Jimmy Page of Led Zeppelin.

Keeping with tradition, this year’s Olympic torch – which was lit back in October in ancient Olympia, Greece, to honor the birthplace of the Olympics games – will be passed on to Tokyo as the city prepares for the 2020 Summer Olympics.

Oh Jang-hwan, director of ceremonies for the PyeongChang 2018 organizing committee, discussed the ceremony’s theme in an article on the official Olympics website.

“The theme for the Closing Ceremony is “Next Wave.” It will have a festival atmosphere to recognize and celebrate the athletes’ hard work and achievements at the Games,” Jang-hwan said in the interview. “We have created a show that looks towards the future; it includes quite a lot of traditional Korean humor and fun elements to add to the party feel.”

Correction: The original version of this story misstated who would carry the U.S. flag for the 2018 closing ceremony. It will be Jessie Diggins, not Simone Biles. 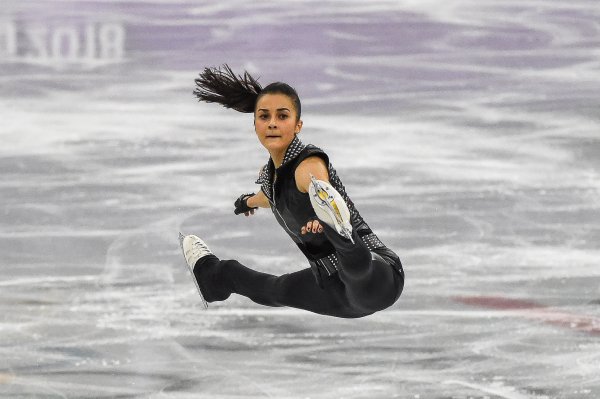 The Internet Has a Classic Rock Hero in This Figure Skater
Next Up: Editor's Pick