Oprah Interviewed Reese Witherspoon, America Ferrera and Other Stars About Time's Up

Following her Golden Globes speech that sparked presidential rumors, Oprah Winfrey interviewed some of the women behind the Time’s Up movement for CBS Sunday Morning.

In a conversation held after actors wore black at the Golden Globes in protest of sexual harassment and abuse in Hollywood and elsewhere, the women discussed the importance of breaking the silence and supporting women who do not have a public platform or voice.

“There’s a constructive fury that has resulted in a resolute pursuit of equity,” actor Tracee Ellis Ross said. “This is not just my hurt, this is more than my hurt. This is not just my anger, this is our anger. And instead of it just being a feeling, it’s becoming an action.”

Ross was one of the women associated with the Time’s Up movement who spoke with Winfrey. Others included actors Reese Witherspoon, America Ferrera and Natalie Portman; producer Shonda Rhimes; entertainment attorney Nina Shaw and Lucas Films President Kathleen Kennedy.

Winfrey focused on how breaking the silence around sexual assault and harassment could promote change, as well as the importance of advocating for women outside of Hollywood who may have suffered similar abuse but do not have the same platform. Winfrey is a special correspondent for CBS Sunday Morning.

Organized by more than 300 powerful women in Hollywood, Time’s Up is an initiative that aims to combat sexual harassment and assault in workplaces around the country with a number of mechanisms, including legislation and a legal defense fund that provides support to women who wish to report assault or harassment but face legal hurdles to do so. As of Sunday, the group had raised more than $16.6 million for the fund.

The initiative comes amid a national reckoning as men are held accountable for their sexual misconduct, particularly while in high-profile positions in the workplace. Since the New York Times‘ bombshell report on allegations against Hollywood producer Harvey Weinstein, more than 100 men have been accused of sexual misconduct, ranging from groping to rape.

“I think a large part of this is not just changing the written rules but the unwritten rules,” Ferrera said. “I think what we are experiencing now is a tectonic shift underneath our feet, where women and men are feeling that we can no longer not say the truth. And when the truth is said, there is maybe a ripple in our culture right now that is going to allow for there to be a change.”

Winfrey’s own speech at the Golden Globes before her interview with the Time’s Up organizers echoed these sentiments. “I want all the girls watching here now to know that a new day is on the horizon,” she said while accepting the Cecil B. DeMille Award.

As for how these accusations have impacted the careers of the accused, the women behind Time’s Up say that issue does not concern them or their goal. “I’m not here to make that decision,” Witherspoon said.

But the agency they do have, the women said, is to end the stigma around the issue and elevate their voices.

“I’d like to believe the time’s up for silence,” Kennedy said. “We can start there.” 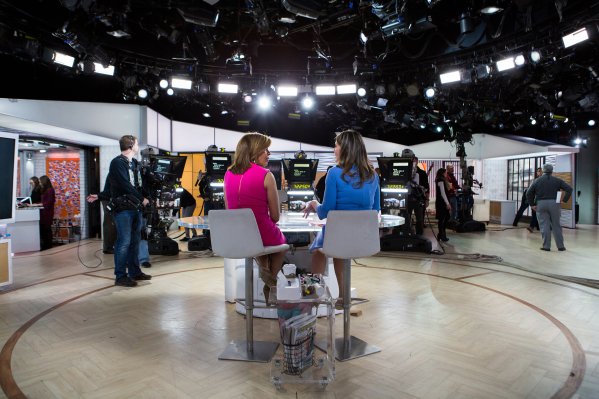 Women Are Getting Male Harassers’ Jobs. But Don’t Call it a Coup
Next Up: Editor's Pick