Why the Red Carpet Is Important in the #MeToo Era

It seems so painfully obvious now, in the #MeToo era, that to ask a woman only
about what she’s wearing, and then to turn to the man next to her and ask him nothing about his clothing, and everything about his work, is sexist, reductive and diminishing.

And yet, before we launched #AskHerMore in 2014, it was de rigueur red carpet tradition.

Over the years the campaign did its work on the red carpet — Hollywood women from Reese Witherspoon and Shonda Rhimes joined in, the internet exploded and the hashtag trended. Ryan Seacrest and Giuliana Rancic changed their tune and asked more substantive questions. Chris Rock even highlighted us in his opening Oscar’s monologue in 2016.

But #AskHerMore was never just about the red carpet. It was always about our larger culture — a culture that never celebrates a woman’s accomplishments as much as her looks.

Women who walk Hollywood’s red carpets are some of the most well-known women in the world. They’re the best at their craft and make a ton of money — though perhaps not as much as their male counterparts — and still cannot be taken seriously. And it’s not just, “Who are you wearing?” But also: “What’s your morning routine?” “How did you lose the baby weight?” “Who’s at home watching the kids?

As the Harvey Weinstein fallout and the numerous #MeToos that followed showed us, the reverberations of that kind of culture are profound. Not even the most well-known women in the world are immune to the sexism, discrimination and violence that follows.

But in the wake of #MeToo, people understandably wondered whether the red carpet even mattered at all anymore. The 2018 Golden Globes was proof that it still does – perhaps it’s even more important than ever.

So what happens when you really value what a woman has to say instead of what she is wearing? When you allow women to take the lead and set the stage? Something quite extraordinary. The night was dominated by the conversation that women demanded we have.

A good majority of red carpet coverage went to the eight activists who were brought by A-list actors – Saru Jayaraman, Ai-jen Poo, Tarana Burke, Rosa Clemente, Marai Larasi, Mónica Ramírez, Calina Lawrence and Billie Jean King – bringing a national primetime spotlight to issues that never get the spotlight. Some of these issues include domestic care work, the One Fair Wage campaign and farmworkers’ rights.

On the red carpet, celebrities were asked, “Why are you wearing black?”and we were treated to incredible moments as a result. Ava DuVernay tweeted: “I am wearing black today because balance and inclusion and diversity is not some kind of allowance to be made to accommodate people. No, sir. It is a correction of an error. It is a righting of a wrong. And it is going to be done. Now.”

And then of course, there was Oprah. Need we say more.

Yes, the silence of men was disappointing, but that’s not the point. The women shined brighter than any shadow the silent men cast.

Our job now is to ensure, with precision and purpose, that this movement doesn’t just benefit the most powerful women in the most glamorous spaces, but also the most marginalized women in spaces and workplaces that don’t make the news. Because feminism that only benefits women at the top — famous, wealthy and predominantly white — isn’t feminism at all.

The women of Hollywood have stepped up to that challenge in commendable ways. In addition to their stunning show of solidarity on the red carpet, famous women are leveraging their spotlight to highlight injustice and change it. They’re banding together to say “Time’s Up.” This collective is leaderless, collaborative and efficient.

They’ve created a legal fund to support women in much less powerful industries who are coming forward with harassment accusations. In joining together, hand-in-hand with the activists on the ground, they’re publicly acknowledging and declaring that their future and equality is bound to the equality and prosperity of others. That none of us are free until all of us are. In the words of Oprah — “a new day is on the horizon.”

This moment isn’t about the red carpet. It’s not about black dresses or about the actors wearing them. It never was. Instead, this is a moment about a movement. A movement that’s uplifting women’s voices, valuing women for their whole humanity and demanding justice. This movement is about creating a different culture — a better culture — and a more just and equitable world for all. 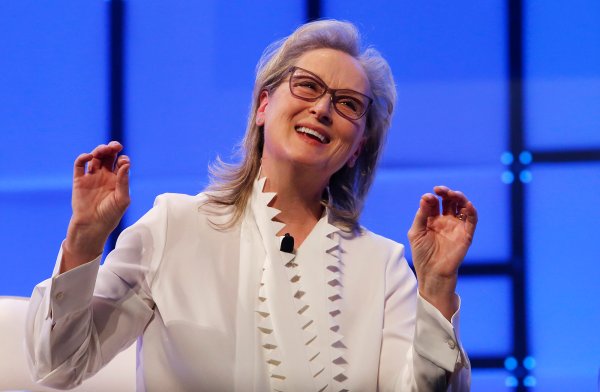 Meryl Streep Sets the Record Straight on What Really Happened When Mariah Carey 'Stole' Her Seat
Next Up: Editor's Pick