The Golden Globes Finally Had a Point. It Made for a Better Show

The 75th Golden Globe Awards ceremony, which aired Sunday night, was the first major live TV broadcast in the wake of culture-shaking revelations about the misdeeds of Hollywood figures, including and especially former awards-season fixture Harvey Weinstein. This year’s Golden Globes was also the debut outing for the newfound Time’s Up movement, intended to fight against sexual harassment—and to raise awareness of that fight by encouraging actors to dress in black. What seemed at evening’s start to be a potentially uncomfortable mix—after all, righteous protest is not always a flattering color on well-compensated celebrities—ended up being a surprisingly meaningful ceremony. It was the happiest of surprises: A Golden Globes that seemed put together with real and meaningful thought.

Part of that had to do with the general sidelining of Golden Globes host Seth Meyers. The late-night star described himself aptly as “like the first dog they shot into outer space” as an awards host in the post-Weinstein Hollywood era. And he didn’t seem ready for the altitude at first, claiming early on that he’d been a second choice to host after various women said no. This was in service of an unworthy joke about how women feel uncomfortable in hotels now because of Weinstein, and worse still, didn’t feel true. (He’s another straight white guy hosting an awards show! What else is new?) What did feel true was a staging of Meyers’s Late Night bit “Jokes Seth Can’t Tell,” in which members of protected-class communities get the opportunity to deliver the punchlines of jokes that, up until very recently, any other straight white guy hosting an awards show would have felt empowered to tell.

What worked and what didn’t about Meyers’s monologue both came back to quite how thought-through it was—some ideas succeeded, and some didn’t. The same went for the Golden Globes at large: For once, things didn’t fall flat for a lack of trying. Various speeches shot for the stars but were happy to settle for a new woke narrative: I, Tonya supporting actress Allison Janney connected her sneeringly cruel film to class and the media and Three Billboards Outside Ebbing, Missouri supporting actor Sam Rockwell claimed his crime-strewn film is really about “compassion.” But you couldn’t blame them too much: It was that kind of night, one in which the room seemed happily receptive to meaning, even if it had to be ginned up.

And all too often, it didn’t. Though she wasn’t nominated for best director, Greta Gerwig made a powerful statement by accepting a best picture prize for her film Lady Bird in place of the producer who typically might have, thanking cast members including best actress winner Saoirse Ronan. Elisabeth Moss, accepting a best actress prize for the TV series The Handmaid’s Tale, quoted her show’s source novel by Margaret Atwood. And the lifetime achievement award went to Oprah Winfrey, who ratified her status as an icon of crystalline communication an astounding account of her view of social progress, ending her speech with the sort of optimism only Oprah can summon: “A new day is on the horizon!”

It hadn’t felt that way throughout the Golden Globes broadcast: A bizarre new shampoo ad from L’Oreal depicting healing broken hair as a “comeback” had somewhat cruelly cast Winona Ryder, as though her career travails were less Hollywood-systemic than just a bunch of split ends easily cut off. And across red-carpet reporting, a tone of reluctance reigned even as black dress after black dress made an incontestable statement. Reporters confronted with the greatest revolution in their field in memory—an exciting development!—seemed incremental at best in choosing whether and how to ask about it. An E! news red-carpet broadcast minimized activist Tarana Burke, being interviewed on-camera, while actresses’ red-carpet glam played across the camera, before immediately cutting to a male commentator making a snide joke about how many children Angelina Jolie had.

But those were the ancillary elements that may change as the awards show does. And the Golden Globes seem to be changing rather quickly. The ceremony had for years been slipping into oblivion thanks to its general attitude of insouciance: In good times, its identity as a bacchanal heavy on substance use but light on substance had been cute fun. But last year’s ceremony, at which no one (least of all then-host Jimmy Fallon, not invited back in an act of mercy) seemed sure how to address a tumultuous national scene and so defaulted to goofy jokes, indicated just how charmless the act had become over time. This year, though, the friction between the Golden Globes’ historical reputation as freewheeling and the political valence of the Time’s Up movement generated real, and meaningful, sparks: Natalie Portman, presenting the best director prize, glancingly mentioned that the lineup was “all-male.”

Her comment came only shortly before Gerwig’s Lady Bird won a best picture Golden Globe, but Portman was commenting less on a specific, obvious snub (why wasn’t Gerwig nominated?) than the sort of systemic silence that for so long has gone entirely uncommented-upon. Her remark used the mechanisms of the Golden Globes against itself, transforming the function of a presenter from simple supplicant to person with a point of view all her own on what she was taking part in. After Portman came Jessica Chastain and then Geena Davis and Susan Sarandon riffing on the pay gap and, presenting the best drama Golden Globe, Barbra Streisand noting “I was the only woman to get the best director award. And, you know, that was […] 34 years ago? Folks, time’s up!” The camera cut to Ronan embracing her director, Gerwig. Political statements at awards ceremonies are nothing new, but the passion and spontaneity of these statements felt very novel indeed.

Forget fears that “wokeness” would end up creating a duller awards ceremony. By the end of the Golden Globes ceremony, an attitude of looseness and openness came through loud and clear. No, none of these were jokes Meyers could tell or political statements he could credibly make. But who needs a host at all when everyone in the audience is doing their part to share their passion? This is the sort of party at which it’s fun to be a part, slow to warm up but then suddenly a free exchange of ideas, of passions, and appreciation unburdened by the heaviness of things unsaid. Perhaps next year, the Golden Globes can go hostless—and after that, we can work on dismantling the E! broadcast and the haircare commercials. 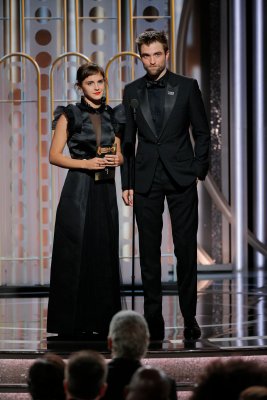 Emma Watson and Robert Pattinson Reunited at the Golden Globes and Harry Potter Fans Loved It
Next Up: Editor's Pick