In Memoriam 2017: How 11 Notable People Were Remembered This Year

Since the magazine’s very first issue, TIME has noted recent deaths and other important events of the week in the Milestones section. From commemorating their lives and accomplishments to celebrating their humor and outlook, here’s a selection of the ways in which friends, colleagues and TIME staff remembered some of those those who died in 2017.

Bill Paxton, remembered by James Cameron: “Of course even now, after his long and celebrated career, one of his most memorable characters remains one of his earliest: Private Hudson in Aliens. His wail, ‘It’s game over man!,’ is as funny today as it was 31 years ago. It was the voice of the everyman, a quintessentially human response to fear and hopelessness. The night before his heart surgery, which was ironically on Valentine’s Day, we had what was to be our last conversation. He was upbeat, even joking about being scared, saying ‘I feel like Hudson.'”

Liu Xiaobo remembered by TIME’s Charlie Campbell: “A native of China’s northeastern city of Changchun, Liu rose to prominence by helping to lead China’s 1989 Tiananmen Square democracy uprising, which was ruthlessly crushed at a cost of hundreds, possibly thousands, of lives in the streets surrounding the birthplace of the People’s Republic.”

Jimmy Breslin remembered by Gil Troy: “Of course, today’s Queens is not the Queens into which Jimmy Breslin or Donald Trump was born. It is, what Queens mothers once called ‘a regular United Nations.’ Breslin welcomed these immigrants — defending them when necessary, as with his book The Short Sweet Dream of Eduardo Gutierrez, investigating the construction accident that killed a Mexican immigrant. Breslin knew that the new kids from Queens — and their parents — are the ones who make the city work, and they will be the ones who will make a future America soar.”

Jeanne Moreau remembered by TIME’s Stephanie Zacharek: “No one needs to be ‘nice’ about Moreau’s face today. Anyone who doesn’t respond to it — that drowsy mouth turned down at the corners, those alert, quizzical eyes — is probably untrustworthy as a human being. But when your mom told you that true beauty comes from within, she was right about that too: Moreau’s spirit informed her beauty, and it’s the key to what made her such a sensual, captivating, powerful actress.”

Don Rickles remembered by Patton Oswalt: “Whether or not his audience was ‘laughing for the right reasons’ wasn’t his concern. If the audience was too stupid to see that Don was making fun of racism by personifying the most desperate aspects of racism? Then they were part of the joke, too. His attacking of celebrities like Sinatra, and Ronald Reagan and Johnny Carson or whomever else hover into his acidic view? It wasn’t to bring them down. It was to make fun of his own jealousy and self-loathing.”

Edith Windsor remembered by TIME’s Lily Rothman: “The woman whose love for her late wife had altered the course of history found herself changed by the case too; while she’d been guarded for decades, the octogenarian told TIME after her case was decided that ‘I can’t be more out.’ Openness suited Windsor, who celebrated the news of her ruling with a joyful speech at the gay-rights landmark Stonewall Inn bar. ‘If I had to survive Thea, what a glorious way to do it,’ she told the crowd. ‘She would be so pleased.'”

Jerry Lewis remembered by Jim Carrey: “For as long as I can remember, I’ve been drawn to the total sense of freedom in Jerry’s work. I’ve never been particularly grounded in the real world myself, and I love the idea of rebellion against reality. Through his comedy, Jerry would stretch the boundaries of reality so far that it was an act of anarchy; he was completely free of this contrivance that we walk through life with, and I found that extremely liberating.”

Derek Walcott remembered by TIME’s Sarah Begley: “When Derek Walcott won the Nobel Prize for Literature in 1992, TIME called him the ‘Bard of the Island Life.’ It was an apt description, marrying his devotion to his native St. Lucia with his passion for English, the colonizing tongue that both agitated and animated him.”

S.I. Newhouse remembered by Tina Brown: “Si always had an affinity for magazines. He loved them. He read them — every page of the ones he owned — and always picked out the best piece (or the worst), the hidden jewel or the one you hoped you got away with, and critique it with precision. Once he took over as chairman, he went on an acquisition and start-up spree that would turn Condé Nast into a prestige powerhouse.”

Mary Tyler Moore remembered by TIME’s Eliza Berman: “As Mary Richards, a single woman in her 30s working as an associate producer at the Minneapolis news station WJM-TV, Moore became the first never-married career woman to carry her own TV series. A spiritual predecessor to shows like Sex and the City, Girls and 30 Rock, The Mary Tyler Moore Show normalized the notion that a half-hour sitcom — or any show, for that matter — could find both its drama and its humor in female friendship, the pursuit of a career, office relationships and even a sex life (if only alluded to implicitly).”

Michael Bond remembered by Hugh Bonneville: “It’s mid-afternoon in the living room at Michael’s house, looking out over the garden, not so far from Paddington station. The celebrated author is holding a glass of champagne. On the floor, on their hands and knees, are our wives, struggling to put together a cardboard castle that, it says on the box, ‘your pets will have lots of fun exploring.'” 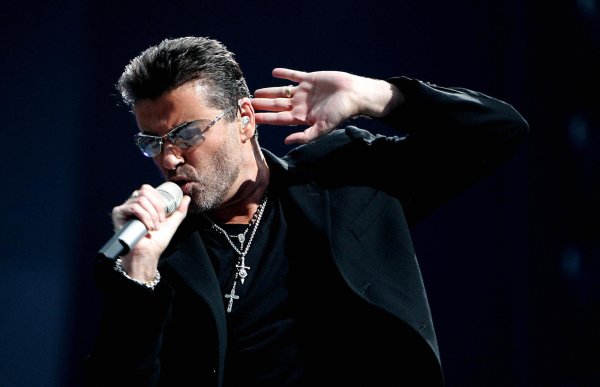 George Michael's Family Shares Tribute a Year After Death
Next Up: Editor's Pick