A menu sits on a table at a Cheesecake Factory restaurant in Louisville, Kentucky on Nov. 13, 2013.
Bloomberg—Bloomberg via Getty Images
By Ashley Hoffman

A man’s Twitter thread featuring his very deep thoughts about The Cheesecake Factory has gone viral.

What followed next was a highly detailed rant filled with design tidbits and philosophical takes on everything from the “off the rails” decor to the menu. His thread has been a lot of fun for social media users who were living in a pre-Krieger review world before he came through with observations like this one.

Here’s how he described the architecture in a tweet paired with a photo: “Greco-Roman cornices, seashells above the pseudo-arched doors, topped with a dome airlifted from f-cking St. Basil’s.”

He thought the interior was sensational too, calling it “a world of aesthetic chaos that feels like a mix between a Fry’s Electronics, an overgrown Panera, and a laser tag arena.” (The over-the-top design incorporates Egyptian and Victorian era design elements, according to Eater.)

Continuing his tour of things that concern him, he had issues with the menu convinced that it just “wants to disorient you.” He especially took issue with the “glamburgers” page. Proving no one cares as much about this place quite as much as him, he was particularly poetic about the advertisements within the menu: “this thing feels like a god d-mn Playbill. all the [The Cheesecake Factory’s] a stage, and we are but its players.”

But his closing thoughts really take the cake: “It feels like a relic of another era, one where such a vision was sold to the American public as a Utopian concept. It, like the brief period of neoliberalistic prosperity that made it possible, is a fever dream made manifest. Enjoy it while you can.”

Read the whole thread in its entirety. 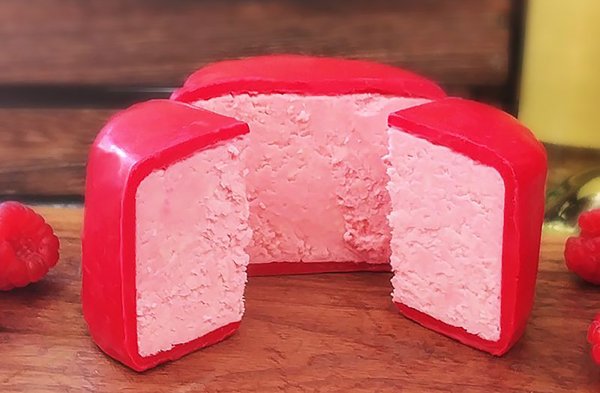 Pink Prosecco-Flavored Cheese Is Here to Satisfy All Your Rose-Colored Food Cravings
Next Up: Editor's Pick