Donald Trump Likes Fights. Here Are His Top 10 Since Winning the Election

Donald Trump was a famously combative presidential candidate, coining nasty nicknames for his opponents and delighting in getting in fights on the debate stages. That behavior didn’t stop when he became president.

With a public persona formed through years in the combative New York real estate scene, tabloid news and reality television, Trump has kept punching from the Oval Office.

On the one-year anniversary of his election, here’s a look at his top 10 feuds.

Trump and the Arizona Republican senator have had a tortured relationship since the campaign, during which Trump mocked McCain’s capture during the Vietnam War and McCain withdrew his support for Trump after the Access Hollywood tape leaked.

Now that Trump is president, the two have sparred over repealing the Affordable Care Act and Trump’s approach to politics, with McCain decrying “half-baked, spurious nationalism cooked up by people who would rather find scapegoats than solve problems.”

Tennessee Republican Senator Corker angered Trump so much that the president reused his favorite campaign nickname for Marco Rubio: “Liddle.” Corker, who is not running for reelection, endorsed Trump in 2016 but has grown more candid in his assessment of the president since announcing his retirement. He suggested the Secretary of State and others protected the country from “chaos.” When the president fired back via Twitter, suggesting Corker “begged” for his endorsement, the Senator called the White House “an adult day care center.”

The most recent flare-up began with an argument about tax reform, and included Trump tweeting that Corker “couldn’t get elected dog catcher in Tennessee.” And then, of course, came the nickname: “People like liddle’ Bob Corker,” the president tweeted in October, “have set the U.S. way back.”

Former Alabama Sen. Jeff Sessions was one of Trump’s earliest and strongest supporters during the campaign, but since Trump took office and Sessions became attorney general, their relationship has become more complicated. In July, Trump said he wouldn’t have put Sessions up for attorney general if he knew he would recuse himself from Russia matters. A few days later, Trump said he was “very disappointed” in Sessions and floated the possibility of firing him. Sessions remains at the head of DOJ, but Trump periodically vents frustration with the agency, making it known to the public that he’s not happy with his former ally.

Trump’s feud with Democratic Rep. Wilson escalated rapidly after Wilson overheard his condolence call to a war widow. Wilson criticized Trump’s words to the widow, and White House Chief of Staff John Kelly responded by mischaracterizing past remarks of Wilson’s and calling her an “empty barrel.” Trump then jumped in, calling her “wacky” and accusing her of “killing the Democrat Party.”

Wilson fired back harder, telling the New York Times that “the White House itself is full of white supremacists.”

Trump once enjoyed a friendly relationship with the hosts of MSNBC’s “Morning Joe,” but that soured dramatically after he became president. In the most shocking attacks in June, Trump dubbed them “low I.Q. Crazy Mika” and “Psycho Joe,” and tweeted that Brzezinski had once come to his Florida estate “bleeding badly from a face-lift.” (That had the worst reception of any of Trump’s tweets as president.) Brzezinski responded on Twitter referencing the ongoing joke about the size of Trump’s hands, and MSNBC released a statement calling it a “sad day for America when the president spends his time bullying.”

When former San Francisco 49ers football player Colin Kaepernick decided to kneel during the national anthem in 2016, little did he know he’d soon be waging war with the President of the United States. Trump latched on to Kaepernick’s peaceful protest — and the numerous others that swept the NFL afterwards during the next season — saying in September 2017, “Wouldn’t you love to see one of these NFL owners, when somebody disrespects our flag, to say, ‘Get that son of a bitch off the field right now?’” Trump’s fight with the NFL has become a wedge issue, TIME reported in October, pitting the president’s conservative, white base against wealthy black athletes and liberal elites.

There have arguably been few decisions in Trump’s young presidency as consequential as firing James Comey as FBI director. Trump sacked Comey in May, ostensibly because of his handling of the Hillary Clinton email investigation, but critics worried also because he was overseeing the investigation into Trump’s campaign’s dealings with Russia. In explosive congressional testimony the following month, Comey said at the beginning of his presidency Trump had told he “expect[ed] loyalty” from Comey and the FBI. It was just one week after Comey’s firing that Robert Mueller was appointed special counsel to handle the Russia investigation.

Hillary Clinton was a favorite target of Trump’s during their bitter presidential contest, and she continues to be even now that Trump has become Commander-in-Chief. Their mutual animosity has come out in all manner of ways during the past year, from Clinton describing in her new book how her “skin crawled” during a debate with Trump and saying he’s a “creep,” to Trump continuing to call on the Justice Department and FBI to investigate Clinton’s finances and emails.

In the wake of a devastating hurricane in Puerto Rico, Trump picked a fight with the mayor of San Juan. During a news conference in September, Cruz called on the federal government to help Puerto Rico and said “you are killing us with the inefficiency.” In a series of tweets the following day, Trump said Cruz “has now been told by the Democrats that you must be nasty to Trump,” has “poor leadership ability” and that she and others “want everything to be done for them.” 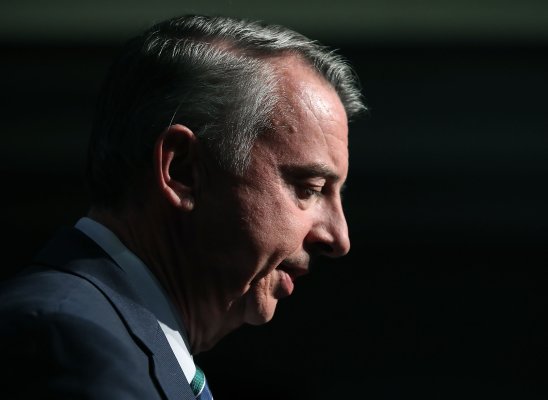 Can Trumpism Survive Without Donald Trump?
Next Up: Editor's Pick