Think Coffee Is Bad for You? This Ad Campaign May Be Why

A 1902 advertisement for Postum.
Jay Paul—Getty Images
By Olivia B. Waxman

Friday marks National Coffee Day, the unofficial holiday for coffee addicts, where the buzz online is where to find deals on free or discounted cups of java. But “because it’s free” isn’t the only reason to be happy with a cup of coffee: these days there’s more and more evidence that a moderate amount of coffee is good for you.

“By now, it’s clear: There’s a strong case for the health benefits of coffee,” TIME reported, earlier this year. “Studies have recently shown that regular java drinkers have a lower risk of diabetes, fewer strokes and heart problems and lower rates of certain cancers.”

That’s a fact that may surprise even the most dedicated coffee drinkers, as coffee has long had a bad reputation among health-minded American consumers. But if coffee’s so good for you, how did that assumption come to be?

One specific place to start is the period around the turn of the 20th century, when the Progressive-era health reform movement was in full swing. When entrepreneur and farm-implement salesman Charles William “C.W.” Post came down with a bad case of neurasthenia in 1885 — a problem that might be called “burnout” today — he checked into a rehab facility where he was taught that the “road to Wellville” involved giving up stimulants, of which coffee was a prime example.

Not content to keep that advice to himself, he developed a coffee substitute he called Postum. It hit shelves around 1895, boasting by some accounts a simple ingredient list of wheat, bran and molasses.

He wrote much of the ad copy himself and went door-to-door to convince newspaper advertising directors to let him buy prominent ad space for the decaffeinated beverage. “Remember, you can recover from any ordinary disease by discontinuing coffee and poor food, and using Postum Food Coffee,” one Postum dictum said, while a 1906 newspaper ad claimed that coffee drinking caused blindness (“Lost Eyesight through Coffee Drinking”). According to Mark Pendergrast’s history of coffee Uncommon Grounds, the Grand Rapids Evening Press gave Post a huge credit to run ads in the paper after becoming convinced by Post’s claim that the new product “makes blood red.” (Postum wasn’t the only food product he marketed this way; he introduced Grape-Nuts by hailing it as the “Most Scientific Food in the World” and a “cure for appendicitis.”)

Meanwhile, the coffee industry tried to rebut these claims by promoting the stories of women like Melinda P. Kyle, a 114-year-old who claimed that drinking coffee was her secret to living longer.

A key turning point came in 1905, when Collier’s published an editorial decrying misleading advertisements for food. A reader argued that the story was hypocritical if the magazine was publishing promotions for Post. Collier’s pulled his ads, and in response, Post bought ads in newspapers nationwide, declaring that the editorial’s author of having “curdled gray matter.” Collier’s filed a libel suit against Post in 1907, and a jury fined him $50,000 after he admitted “that he gave prizes for good testimonials and that he did not have time to investigate whether all were genuine,” as Pendergrast writes.

Though the verdict was later reversed, Pendergrast writes that it still rattled the millionaire Post, and his ads appeared to be more tempered after that.

A few years later, decaf coffee would hit the U.S. market as “Dekafa” by Merck drug company, and start to give Postum a run for its money. Yet, as a sign of how much the marketing campaign resonated with people, the idea that caffeine was bad for you—especially in coffee—had already taken hold.

German merchant Ludwig Roselius created the first method to successfully decaffeinate real coffee at least in part because he was convinced that his father, “a professional coffee taster, had died prematurely as a result of too much caffeine intake,” according to Pendergrast.

In fact, one recent study suggests drinking four cups a day could reduce the risk of premature death. 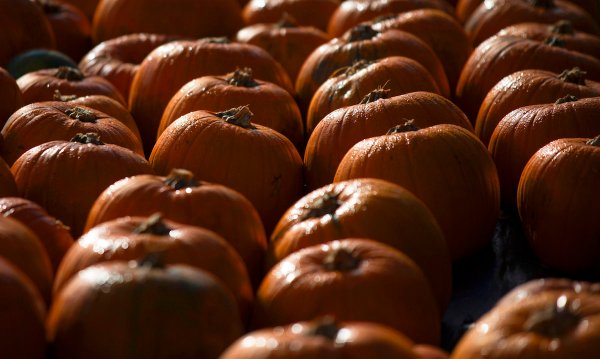 The Surprising Reason Americans Are Obsessed With Pumpkins
Next Up: Editor's Pick