It had also roiled energy markets and caused damage estimated to be in the billions of dollars, with rebuilding likely to last beyond Trump’s current four-year term in office.

“My administration is coordinating closely with state and local authorities in Texas and Louisiana to save lives, and we thank our first responders and all of those involved in their efforts,” Trump told reporters at the White House on Monday.

Trump was scheduled to arrive on Tuesday morning in Corpus Christi, near where Harvey came ashore on Friday as the most powerful hurricane to hit Texas in more than 50 years. The president will later go to the Texas capital Austin to meet state officials, receive briefings and tour the emergency operation center, the White House said.

Forecasters could only draw on a few comparisons to the storm, recalling Hurricane Katrina, which devastated New Orleans and killed 1,800 people in 2005.

The administration of then-President George W. Bush faced accusations that his response was slow and inadequate – criticism that dealt a serious blow to his presidency.

Flood damage in Texas from Hurricane Harvey may equal that from Katrina, one of the costliest natural disaster in U.S. history, an insurance research group said on Sunday.

In Texas, thousands of National Guard troops, police officers, rescue workers and civilians raced in helicopters, boats and high-water trucks to rescue the thousands stranded in the flooding, which turned streets into rivers and caused chest-high water build-ups in scores of neighborhoods.

In Cypress, Texas, Kayla Harvey, 26, was monitoring Facebook, finding where people were stuck and organizing friends with boats to go out and help. “This is just what we do for our community. We don’t wait for someone to come and help we just go out and do it,” she said.

The last Category 4 hurricane to make landfall in Texas since Harvey was Carla in 1961. It packed winds and rains that destroyed about 1,900 homes and nearly 1,000 businesses, the National Weather Service said.

Among the most recent fatalities from Harvey was a family of two adults and four children who were believed to have drowned after the van they were in was swept away by floodwaters in Houston, authorities said on Monday.

Since coming ashore, Harvey has virtually stalled along the Texas coast, picking up warm water from the Gulf of Mexico and dumping torrential rain from San Antonio to Louisiana.

The Houston metro area has suffered some of the worst precipitation with certain areas expected to receive more than 50 inches (127 cm) of rain in a week, more than it typically receives for a year.

Why We Won't Be Ready for the Next Hurricane Harvey Either

Harvey is expected to produce another 10 to 20 inches of rain through Thursday over parts of the upper Texas coast into southwestern Louisiana, the National Weather Service said.

“These stationary bands of tropical rain are very hard to time, very hard to place and are very unpredictable,” said Alek Krautmann, a National Weather Service meteorologist in Louisiana.

Schools and office buildings were closed throughout the Houston metropolitan area, where 6.8 million people live.

Houston and Dallas have set up shelters in convention centers and Austin was preparing to house as many as 7,000 evacuees.

Hundreds of Houston-area roads were blocked by high water. The city’s two main airports were shut as the floods turned runways into ponds and more than a quarter million customers were without power as of Tuesday morning.

The floods could destroy as much as $20 billion in insured property, making the storm one of the costliest in history for U.S. insurers, Wall Street analysts say.

The Brazos River, one of the longest in the country, was forecast to crest at record highs well above flood levels on Tuesday about 30 miles (49 km) southwest of Houston, prompting authorities in Fort Bend County to order the evacuation of about 50,000 people. 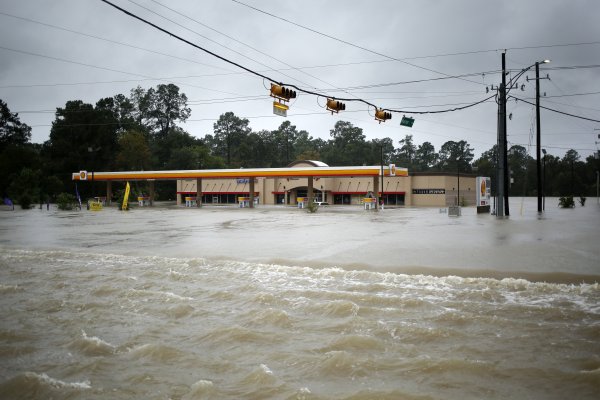