Throughout this season of Game of Thrones, Littlefinger has schemed to drive a wedge between the Stark sisters. And his plan seems to be working: In “Beyond the Wall,” the two women argued about everything from whether Sansa secretly desires to rule Winterfell by herself to Arya’s creepy bag of faces.

Yet the plot does not fit within the two characters’ carefully plotted arcs. Both Sansa and Arya have spent years learning the art of manipulation and ought to recognize when they are being played.

But on Game of Thrones things aren’t always as they seem. The show has dropped a few breadcrumbs that suggest Sansa and Arya are actually the ones manipulating Littlefinger. Here are the clues.

Sansa and Arya are smarter than they currently appear

Master manipulator Littlefinger is trying to manipulate arguably the two most skilled manipulators in the realm. Arya has spent years training with the Faceless Men to detect the difference between a truth and a lie. At this point, it’s hard to believe she would be so easily taken in by Littlefinger’s trickery. And Sansa has studied at both the Cersei Institute for Deceit and the Littlefinger School of Manipulation. Nobody knows Lord Baelish better. Earlier this season, she said that it would be unwise to trust Lord Baelish — the man who married her off to a psychopath — so she probably doesn’t plan to trust him now.

Maybe it’s because we still think of Sansa as a naive young girl. But for whatever reason, the audience — and other characters — continue to underestimate her. She has explicitly said many times that she doesn’t trust Littlefinger.

Last season she told Jon, “Only a fool would trust Littlefinger.” This season she said of Lord Baelish, “I know exactly what he wants.” During her discussion with Bran and Arya about the Valyrian steel dagger Littlefinger gave to Bran, Sansa wisely pointed out, “[Littlefinger]’s not a generous man. He wouldn’t give you anything unless he thought he was getting something back.” (More on that later.)

And yet everyone continues to assume Sansa will fall for Littlefinger’s tricks. Perhaps she is sick of being underestimated. When Brienne suggested in Sunday’s episode that Podrick stay in Winterfell to protect Sansa from Littlefinger, Sansa shot back, “I do not need to be watched over or minded or cared for. I’m not a child. I am the Lady of Winterfell, and I am home. This is the safest place for me.” Nobody believes Sansa when she says that she knows Littlefinger’s plan, but maybe we should.

When Arya and Sansa were first reunited, they embraced twice. That’s no small act considering they didn’t get along well as children. They then have a meaningful discussion by their father’s tomb:

“Everyone who knew his face is dead,” Sansa says.

If ever there was a sign that these two are survivors — who will continue to survive — this was it.

They conferred with Bran

Shortly after the sisters reunited, Arya, Sansa and Bran talk about the dagger Littlefinger gave to Bran. Sansa points out that it must be part of some plot.

Bran — who has the ability to see the future — then gives the dagger to Arya. Bran probably wouldn’t have handed the weapon over to Arya if he thought the two sisters might use it against one another.

It’s true that the Stark siblings exchanged very little information in this scene: Why hasn’t Arya told Sansa that Littlefinger allied himself with the Lannisters when Arya was working for Tywin? Why hasn’t Sansa told Arya about her horrible time with the Joffrey? Why didn’t Bran tell both his sisters that Littlefinger betrayed Ned? But perhaps they are having these conversations offscreen and we as the audience are only seeing events from Littlefinger’s perspective.

Arya wants Littlefinger to see her spying on him

Audiences were quick to assume that Arya is a bad spy who falls into Littlefinger’s trap. But if Arya really wanted to go unnoticed, she would wear someone else’s face. Perhaps she wanted Littlefinger to know that he was being watched so that she and Sansa could determine his plan and use it against him.

Meanwhile, the sisters know they are being watched and fight in hopes that Littlefinger will believe his plan is working. They have several of their arguments outside or with doors open so that anyone can hear. That might explain why Arya’s memory of how Sansa reacted to their father’s death is strangely inaccurate. She remembers what Sansa was wearing at their father’s beheading but not that she was screaming and sobbing as it happened. Maybe that mistake is a hint to the audience that everything is not as it seems.

A fake feud wouldn’t explain the confrontation in Arya’s room on Sunday night’s episode, which was a more private conversation. It could be that Sansa was genuinely surprised to find a bag of faces under her sister’s bed. But Arya declares that she’s playing the game of faces — a game in which the listener is supposed to determine truths from lies — and then goes on to tell several lies. She says she would never serve the Lannisters but was Tywin’s cup bearer. She says she wonders what it would be like to wear Sansa’s “pretty dresses,” even though Arya has expressed absolutely no interest in the trappings of femininity throughout the series. And of course she misremembers Sansa’s reaction to their father’s beheading. Perhaps these are all lies Arya is telling as part of the “Game of Faces.”

At the end of the conversation, Arya hands the dagger to Sansa, signaling that she will not hurt Sansa and that she trusts her.

The letter wouldn’t convince Arya to turn against Sansa

Sansa wrote the letter when she was a teenager under duress. Arya would hopefully understand that Sansa felt she had to write the letter in order to survive and save their father. After all, Arya herself served Tywin Lannister as a cup bearer and took no action against him while there.

Plus, the letter would not give Arya very much leverage against Sansa. Robb shared the letter with multiple people when he received it from Sansa. And it was that very letter — and Robb’s conviction that Cersei forced Sansa to write it — that convinced Robb to march on King’s Landing. Robb’s followers would have heard about this letter. And if they hadn’t, they certainly would have understood why a teenage girl would write it while being held prisoner.

Why did Sansa send Brienne away?

Littlefinger explicitly mentions Brienne as a person who is honor-bound to keep the peace between the two sisters. At first blush, Sansa sending Brienne away would seem to mean that Sansa intends to hurt Arya and is dispatching the only person who could stop her. But even before Sansa knew Arya had faceless abilities, she knew that Arya was dangerous. Sansa watched Arya and Brienne tie in a swordfight. More likely, Sansa is trying to stay one step ahead of Littlefinger. Brienne’s departure would give Lord Baelish a false sense of comfort.

“The lone wolf dies. But the pack survives.”

An early trailer for season seven of Game of Thrones ended with an ominous voiceover from Sansa. “The lone wolf dies, but the pack survives,” she says, presumably referring to the Stark family and its house sigil. Sansa has yet to utter this line on the show, so it will likely arrive during the season’s final episode.

It’s possible Sansa would say this line over Arya’s dead body — Arya being the lone wolf and she and Bran being the pack. More likely, the lone wolf refers to patriarch Ned Stark (or perhaps Robb Stark) both of whom died when separated from the family. What Sansa must have learned — and what Ned imparted to the children in the books — is that the Stark children need to stick together.

Bran has been conspicuously absent from this ongoing Stark sibling drama. So far Littlefinger and perhaps we as an audience have discounted him as a player in the Stark drama. But remember, his sisters can consult with him at any time about what Littlefinger is doing or has done. Yes, Bran is weird now. But he also might be able to provide the intel Sansa needs to sentence Littlefinger to his death.

There would be a certain poetic justice to Sansa killing Littlefinger for betraying both her and her family again and again. Littlefinger got Ned killed, sided with the Lannisters against Robb and stuck Sansa with the Boltons. Littlefinger used Catelyn’s trust in him against Ned, and Sansa might just use Littlefinger’s love of her to manufacture his doom. She needs to be careful though: She must dispatch of Littlefinger in a way that allows her and Jon to retain the loyalty of the Vale. 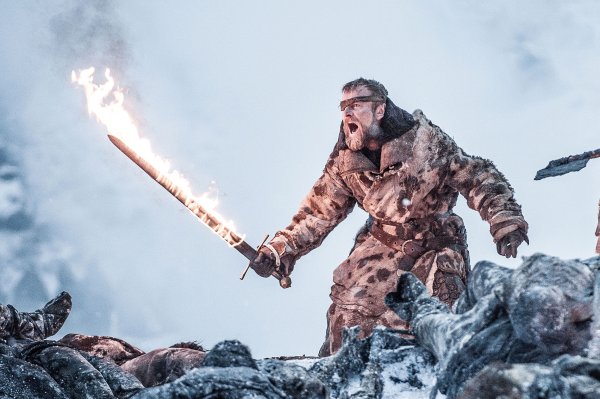 Game of Thrones' Beric Dondarrion on Why His Connection to Jon Snow Matters
Next Up: Editor's Pick