UVA Alumna Sasheer Zamata: 'The Confederacy Didn’t Win and Neither Will They'

It may be hard to tell what era this picture is from, but this is me when I was going to school at the University of Virginia in Charlottesville, Va. Over the weekend, a group of terrorists (people are calling them “White Nationalists”) attacked Charlottesville and the people protesting their efforts to protect statues dedicated to oppression and the division of this country. I got really sad and scared after reading the news and didn’t know what to do with my emotions, but after thinking about it for a while, I’ve decided to write out some positive memories I have from my time in Charlottesville that make me smile when I think of them.

I played the Lady in Green in Ntozake Shange’s choreopoem “for colored girls who have considered suicide / when the rainbow is enuf” and learned so much about myself and performance. This show inspired me to become a Drama major. Prof. Theresa Davis/Mama T directed the show and told the cast to go talk to the audience in costume after our performances. People of all different ages, genders, and ethnicities came up to us crying and telling us how much they connected to the words and emotions of the show, and that’s when I knew I wanted to do this forever. I loved making people feel something when they left the theater, and that’s still my goal today.

The first time I bought a car with my own money was in Charlottesville. It was so old that when I tried to get new parts for it mechanics would tell me it’s not possible because the parts I would need for that car don’t get produced anymore. But it did its job and got me around.

I learned American Sign Language and going to signed lunches and dinners in the city was part of the curriculum. I liked learning about and communicating with a community of people I didn’t know much about prior to college.

I starred in my first short film (by Konstantin Brahznik) and we shot it during my first winter break at UVA. I played a slave who was raped and impregnated by a slave owner, and the campus was an appropriate setting since the school was built by slaves and the slave quarters are still intact. Despite how heavy the content may have been, I had a blast being in town while everyone else was home for break because, for a moment, the campus felt like it just belonged to me.

I started an improv group, called Amuse-Bouche, with my friend Natasha Vaynblat and it’s still active at the school. UVA had a very student-run vibe when I was there, and it gave me the sense of “if you see a void in this community, you can fill it.” I did that in many ways, but one of my favorite ways was creating a reason to play with my friends every week.

I co-directed the Vagina Monologues with my friend Brenna Lynch. She worked hard on creating a pre-show sexual health fair called the Vulvapalooza, and I remember she fought really hard to get the school to let us put a giant image of a vagina on the wall. We got a hard no, but I loved that we tried. That show helped me view empowerment and my vagina in a new way.

I got hit by a car, and that part wasn’t fun, but the outpouring of love and support I got from my friends and other students was so overwhelmingly positive that it dulled my cynicism and increased my love and appreciation for people.

I’m not saying that Charlottesville is full of inclusion and harmony. The racism I saw at the school made me want to transfer my first year, and after talking to a peer advisor (a black upperclassman), I decided not to. She said that I could transfer and maybe things would be easier at a different school, or I could stay and learn about racism now so I’m not surprised when I encounter it after college. I thought that was a pretty bleak way to look at it, but she was right. I’m glad I stayed and I was able to witness racism in a safer environment than I would on my own as an adult.

I essentially minored in race relations while in school, and I imagine a lot of students of color feel the same way. So now when racist things happen, I’m not surprised. I still get sad and angry, but I’m not surprised, because I know how to identify it. Fortunately, racism was only a small part of my college experience and not the first thing I remember when I think of Charlottesville. There are things to work on, like in every community, but the revisionist history that the Robert E. Lee statue promotes is no longer welcome.

I’m excited about its removal and the progress we’re making by acknowledging this country’s transgressions. Like Mayor Mitch Landrieu said in his speech addressing the removal of the Confederate monuments in New Orleans, these monuments were “erected purposefully to send a strong message to all who walked in their shadows about who was still in charge in this city.” And that’s why these hate groups are scared, they’re afraid they’re not in charge anymore, and they should feel that way. They can keep rooting for a losing team if they want to, but the Confederacy didn’t win and neither will they.

This article originally appeared on TheSheerTruth. 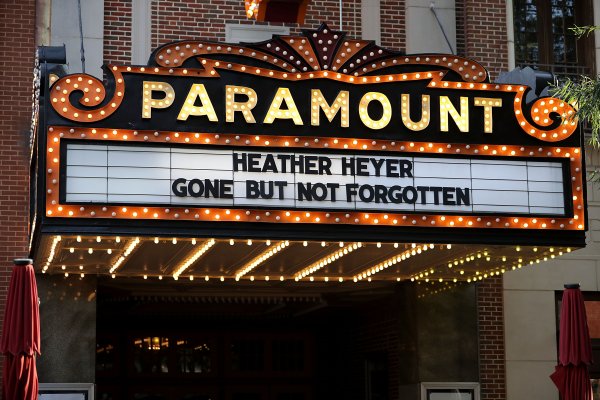