Mr. President, I Demand You Do Your Duty and Insult Me. Please?

A year ago mainstream journalists were insignificant — usurped by bloggers, tweeters, podcasters and selfies of women doing yoga. But now we’re getting into personal feuds with the President, a distinction once reserved for dictators, political rivals, union leaders and Donald Trump.

So I feel deeply insignificant, because Trump has not once threatened, mocked, discredited or belittled me, leaving me feeling like a washed-up celebrity in the front row of a Don Rickles show. It’s not like I haven’t tried to bait him. I’ve insulted him on Twitter, in my column, on radio shows and on cable-news programs. I’ve even tried on the phone and in person. The closest I came was when I told him I was surprised that he was offering to shake my hand despite his being a germophobe. “What am I going to catch from you?” he asked in a way that seemed like an insult at the time, but now that I’ve become more familiar with his history, I realize this was just his way of acknowledging that I’m white.

And Trump must be familiar with my writing. He likes TIME so much that someone in his orbit created a fake TIME cover of him to put on the walls of his golf club. I don’t know exactly what articles run inside his fake version of TIME, but I’m guessing that if anything from real TIME runs in fake TIME, it’s got to be my column.

A few months ago I asked Hope Hicks, the White House director of strategic communications, how I could provoke the President into retaliating, and she told me to just keep doing what I do. It has not worked. Fake news!

In desperation, I prostrated myself before successful Trump aggravators, begging for tips on how to be Trumpsulted™. I asked Kurt Andersen, who as co-founder and co-editor of Spy published the ‘short-fingered vulgarian’ insult and is co-writing a book with Alec Baldwin called You Can’t Spell America Without Me: The Really Tremendous Inside Story of My Fantastic First Year as President Donald J. Trump. He’s been Trumpsulted™ as a “third-rate writer and an unsuccessful one at that.” To get that kind of presidential attention, Andersen suggested that I chronicle a fake affair with Melania Trump, naming dates when she was apart from her husband. I was going to try this on Twitter when I realized that my lovely wife, Cassandra, would see it and then make fun of me for insinuating that Melania would ever have any interest in me.

S.E. Cupp, a conservative host on HLN who has been Trumpsulted™ as a “totally biased loser who doesn’t have a clue” and “one of the least talented people on television,” said I was going to have a tough time. “It seems to help if you have a uterus,” she explained. Also, I needed a more prominent weakness. “Can you become a celebrated POW? A disabled journalist? An overweight woman? Or a man of below-average height?” she asked. Cupp has the advantage of being considered a traitor, since she’s a conservative. Trump sent her a housewarming gift when she moved into one of his buildings and asked her to introduce him at an event before she turned on him. All I had was our one possibly racist handshake.

But I will not give up. I will point out that his tiny hands apparently cannot pull his necktie above his knees. I will remind everyone that golfers — especially ones who don’t drink — never drive carts on the green. I will bring up the fact that people with great stamina don’t fall asleep in the middle of a rage tweet and type “covfefe.” I will accuse him of mistaking Theodore Roosevelt’s advice as “tweet loudly and carry a tiny glove.” And I will most certainly remind the man who spends so much time selling heterosexual machismo that no straight man I’ve ever met cares about beauty pageants. The best guess I have for the winner of the last Miss USA pageant is “Miss USA.”

Because when you have a President so threatened by facts and opinions that oppose his views that he tweets about the media more than his policies, it makes being a journalist more important than it’s ever been in my career. It also makes it way more fun. 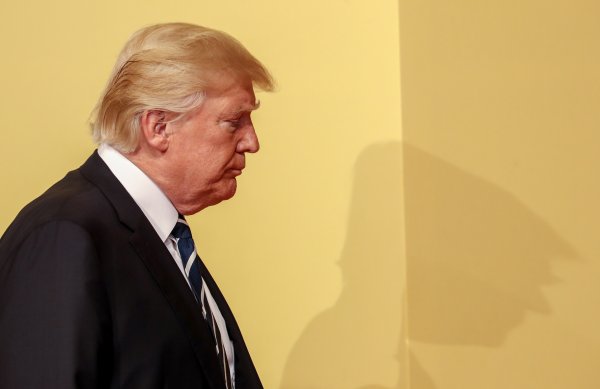 Support for Impeaching Trump Holds Steady in Latest Poll
Next Up: Editor's Pick