The dramatic grey skies on Monday night might be typical of London, but so was the undeterred spirit of those gathered for a vigil by the banks of the river Thames in solidarity of the victims of Saturday’s terrorist attack.

Hundreds spilled out from Potters Fields Park, which is next to the capital’s bulbous City Hall, as they waited for London Mayor Sadiq Khan, to make a speech next to Home Secretary Amber Rudd, Shadow Home Secretary Diane Abbott and representatives from London’s Metropolitan Police, Ambulance Service, Fire Brigade, as well as faith and community leaders.

The horrific series of events on Saturday had left a scar on many who attended the event. Advertising executive Joel Schillig, 34, tells TIME of the “nausea and shock” that overcame him when he first heard that an attack took place meters away from his workplace in London Bridge. “It was a feeling of ‘how dare they?'” Schillig says.

Seven people died and dozens were injured on Saturday when three attackers in a white van mounted a pavement on London Bridge. The vehicle pummeled pedestrians as it hurtled down south to the sprawling Borough Market complex. The assailants then bounded out of the van with knives and set themselves upon unaware revelers enjoying the lively nightspot on the warm summer’s evening. The crude attack ended as quickly as it began, with police officers shooting assailants dead outside a pub eight minutes after they receiving the first emergency call.

Schillig, like many others TIME talked to, attended the vigil in a show of strength against terrorism. This is the third attack to have hit Britain in the past three months — the first in March at London’s political heart in Westminster followed by a bombing at an Ariana Grande concert in Manchester. “We are not afraid, we are not about evil, we are love,” Schillig says of the British spirit in the face of such divisive and horrific acts.

The gathering was a snapshot of London’s diverse core. A class of students from the Islamic faith school, Eden Girl School, in North-East London was there to pay their respects to the victims. “We are all Londoners and what these people did is wrong” Aneesah Sandford, 14, tells TIME.

Anglican clergyman Joshua Rey told TIME that while he found it “hard to fathom” why people would attempt to kill innocents, he nonetheless feels “safe and secure” in London. “We are very well protected by our health and security services.” he says. “We shall keep calm and carry on.”

Khan mounted the stage to loud cheers from the otherwise quiet crowd. “London stands in defiance against this cowardly attack on our city, our people, our values and our way of life,” Khan said. “As Mayor of London, I want to send a clear message to the sick and evil extremists who commit these hideous crimes. We will defeat you. You will not win.” Shortly after his remarks he held a minute of silence for the victims.

So far only two victims killed in the attack have been named: Canadian Chrissy Archibald and East London local James McMullan. Four French nationals, two Australians, a New Zealander and one Spaniard are reportedly among the dozens affected in the brutal attack that struck the major gastronomic destination of Borough Market.

Some at the vigil, understandably, are fearful that the spate of attacks could represent a new norm in London. American citizen Jillian Symes, who has lived in the British capital for a decade, was there with her two-year-old daughter Ruby. As her daughter played with a sign they made, which read “#WeStandTogether,” Symes said that she “most importantly” wanted her daughter’s future to be safe.

The terrorists have attempted to sow division in this proudly multicultural capital, but the city has a long history of enduring attacks — from bombardment by German warplanes in WWII, to attacks by the Irish Republican Army from the 1970s to the 1990s, to the July 2005 bombings of the London Underground and a city bus. “We went through the blitz, 40,000 people died then, we survived through the IRA bombings, and we will come through this” civil servant James Watts told TIME at the vigil. “London has survived again, and again and again, it has 2,000 years of history, and it will survive through this.” 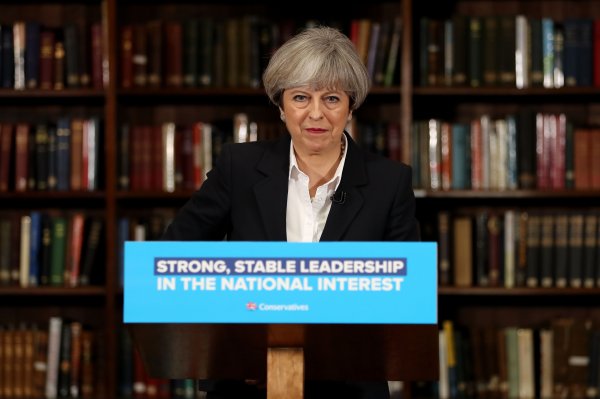 Theresa May Wants to Regulate Cyberspace After the London Attack. Will the World Follow?
Next Up: Editor's Pick