Chris Pine made his message very clear during his first gig hosting Saturday Night Live: No, he’s not Chris Pratt. Or Chris Hemsworth. Or Chris Evans.

The actors — all similar in their ages, appearances and levels of fame — are often confused with each other, and Pine used his opening monologue on Saturday night to set the record straight.

But the Star Trek star had a difficult time explaining why he’s unique. In fact, Saturday Night Live star Leslie Jones came on stage with him — immediately confusing him with Evans and Hemsworth.

When he told her he was Chris Pine, Jones said, “OK, that’s good enough,” and took a selfie with him.

“Thank you, Thor,” she said, referring to Hemsworth’s Marvel Comics character, as she walked away.

Pine then unveiled a poster of the four famous men named Chris, attempting to show the differences between the scruffy, blond men. Pine then broke into song, using “Uptown Girl” to explain the difficulty of often being confused with these others men.

“We’re all white guys, but these aren’t the white guys I am,” he continued, before Saturday Night Live star Kate McKinnon walked on stage. She appeared to know which Chris he was — but only with the help of some notes on her hand.

“Yes, of course you’re in Star Trek,” she said, glancing down at the notes on her hand. “And, uh, Wonder Woman.”

Watch the full opening monologue in the video above. 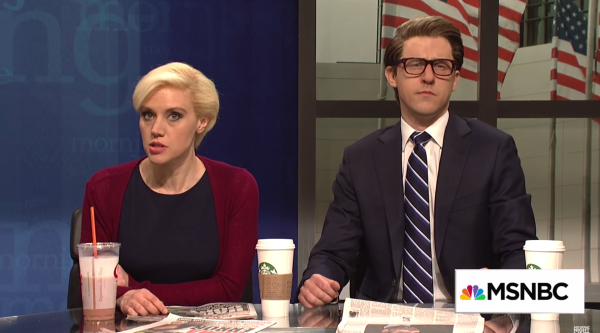