President Donald Trump on Tuesday opened his address to a joint session of Congress by condemning hate crimes, following weeks of criticism for his relative silence on the issue.

“Tonight as we mark the conclusion of our celebration of Black History Month, we are reminded of our nation’s path toward civil rights and the work that still remains to be done,” Trump said.

“Recent threats targeting Jewish Community Centers and vandalism of Jewish cemeteries, as well as last week’s shooting in Kansas City, remind us that while we may be a nation divided on policies, we are a country that stands united in condemning hate and evil in all of its very ugly forms.”

Trump sparked criticism in recent weeks for his reluctance to speak out about anti-Semitic attacks. When he finally spoke out last week, the Anne Frank Center for Mutual Respect criticized his comments as “a Band-Aid on the cancer of anti-Semitism that has infected his own administration.”

“I’m here tonight to deliver a message of unity and strength,” he said. “And it is a message deeply delivered from my heart.” 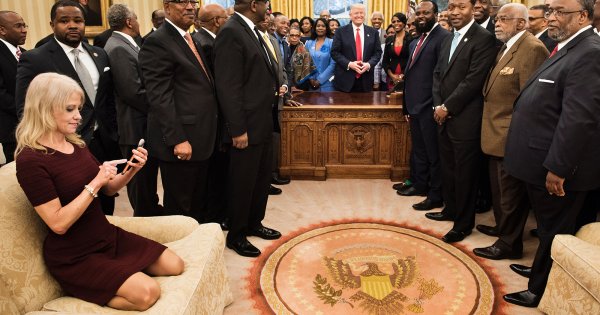 Kellyanne Conway's Couch Moment Isn't the First in the Oval Office
Next Up: Editor's Pick