When Microsoft announced Windows Phone 8.1 a couple months ago, it seemed to have finally caught up to iOS and Android in many meaningful ways.

I’ve had bad experiences with Windows Phone in the past, but I wanted to give Microsoft’s underdog platform another shot. So in mid-May, I asked the company to loan me a Nokia Lumia 1520, and installed the Windows Phone 8.1 Developer Preview when the handset arrived. Over the next month, I used it as my primary phone, with my own AT&T SIM card.

For me, Windows Phone 8.1 has been a mix of delight and frustration. I can finally see the appeal of using Windows Phone, but spending some quality time with the platform also revealed major cracks in an otherwise solid foundation. Here’s what I liked and disliked about Windows Phone after living with it for a month:

Start Is Still the Best Part

After using Windows Phone for a while, I’m convinced that Microsoft has come up with the best app launcher, even if it takes some adjustment coming from iOS and Android. The Start screen, as Microsoft calls it, lets you set up your favorite apps–or “Live Tiles”–in a vertical stack. You have a choice of three sizes for each tile, and the larger each one gets, the more information it can show you directly on the Start screen. At a glance, I can see the day’s forecast, recent social networking updates from a group of friends and the latest Techmeme headlines.

Of course, Android has a similar system with widgets, but they aren’t as neat and orderly as Windows Phone’s tiles. You also have to spread them across multiple screens, instead of having one compact, flowing list, so it’s more of a chore to see what’s happening. With Android, you’re more likely to forget what you’ve put on those far-flung screens. I’ve said this before, but the Windows Phone’s Start screen is fun. It’s begging you to check out this or that diversion, which is perfect when you’re killing a few idle minutes.

This is a tricky thing to quantify, but Windows Phone has a lot of little clever designs to help users feel at home. Some of it’s cosmetic, like the way everything scrolls smoothly, and how the screen seems to squish together as you scroll past the edge of a page. But there are also little breadcrumbs that make Windows Phone easier to use.

For example, in most apps you’ll see a few action icons at the bottom of the screen, along with a “…” button next to them. Pressing that button may bring up more options, but it also slides the other buttons upward and shows some text to describe what they do. This prevents you from resorting to trial-and-error as you figure out how to use an app.

Also, I like how Internet Explorer puts the address bar at the bottom, making it easier to reach with a large phone like the Lumia 1520. And the new gesture keyboard is one of the best I’ve ever used, as it builds on Microsoft’s responsive, clutter-free touch keyboard. Things like these don’t show up on a spec sheet or feature list, but they show how Microsoft has really thought things through.

Notifications Need a Lot of Work

The Start screen is no replacement for a proper notification center, so I was happy that Microsoft finally added “Action Center” in Windows Phone 8.1. Similar to the notification bars on iOS and Android, Action Center is a condensed list of all incoming messages, e-mails and alerts, which you can swipe down from the top of the screen. You can also toggle a handful of quick settings from this menu, such as rotation lock and airplane mode.

As a high-level way to see what you’ve missed, Action Center is a fine start, but it has one huge problem: When you tap on a notification, many apps don’t actually take you to the thing they’re notifying you about. For example, if you tap on a Twitter alert, it only takes you into the main screen of the Twitter app, not to the actual message. I suspect this is a matter of developers programming their apps to handle notifications properly, given that Microsoft’s Mail app handles notifications just fine. But because Windows Phone has weak developer support (more on that later), I’m not holding my breath for widespread improvements.

Microsoft also has another notification problem: Just as it’s finished playing catch up with Action Center, it’s falling behind again on actionable notifications. With Android, for instance, you can delete e-mails, reply to messages or “favorite” a tweet straight from the notification bar, and Apple will add similar capabilities in iOS 8. Microsoft’s notification system is lifeless by comparison, and that could become a big disadvantage if notifications become a key aspect of wearable tech.

Apps Are an Annoyance

A common argument from Windows Phone fans is that the app gap has closed considerably over the last couple years, and that most users don’t need a ton of apps anyway. While it’s true that you can get by with Windows Phone’s app selection, you’ll probably still have some headaches when the app you want doesn’t exist on Windows Phone, or isn’t as well-supported compared to iOS and Android. Here are some of my app issues:

None of these things keep me from being able to use Windows Phone. They just make the experience more annoying.

Technically, the default Mail app in Windows Phone works with Gmail, but it’s far from perfect. It takes a long time to load long conversation threads, and it’s slow to sync any messages you’ve deleted, so you might see those messages again if you sit down at your computer a few minutes later.

I worked around this by using a third-party app called MetroMail for those longer threads, but this app doesn’t handle notifications properly (see above), and it takes several seconds to load new messages each time you open the app. In other words, I’m stuck with two half-solutions instead of one really good Gmail app, like the one Google offers on iOS and Android.

There’s a Well of Untapped Potential

If there’s one thing that would really help sell me on Windows Phone, it’d be greater connectivity with Microsoft’s other platforms. So far, Windows Phone still feels like its own little island. OneDrive cloud storage isn’t built into the file system like it is in Windows 8.1, and there are not enough strong ties back to the Xbox for gaming. (I’m still dreaming of a way to attach a game controller and take smaller-scale Xbox games on the road.) The version of Office that comes with Windows Phone is still a shadow of what’s available on Windows devices. Microsoft likes to tout “one experience across all devices,” but Windows Phone needs more work for that promise to become a reality.

Like I said earlier, I can see some appeal in Windows Phone now. It might especially make sense for novice smartphone users that don’t want an iPhone (mainly because of differences in price and available screen sizes), and aren’t looking to use a lot of apps.

But for me, Windows Phone needs a better hook than a great app launcher and some clever design flourishes. It could be in the form of killer hardware that no other platform has, but more likely, it’d have to be through tighter integration with the rest of Microsoft’s ecosystem. I already use a Surface Pro on the road and Windows desktop at home, so more “continuity” (to borrow a term from Apple) might convince me to forgive Windows Phone 8.1’s other shortcomings. 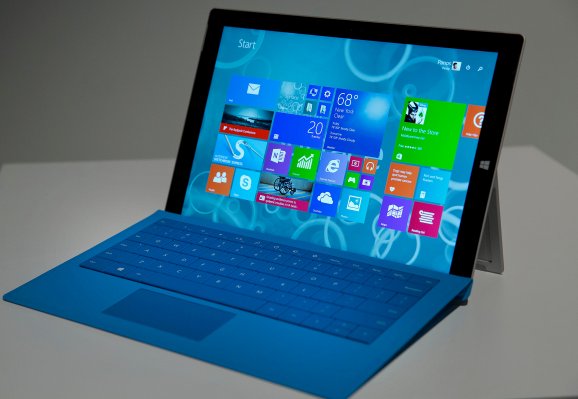 Microsoft Is Giving Apple Users Hundreds To Buy the Surface Pro 3
Next Up: Editor's Pick