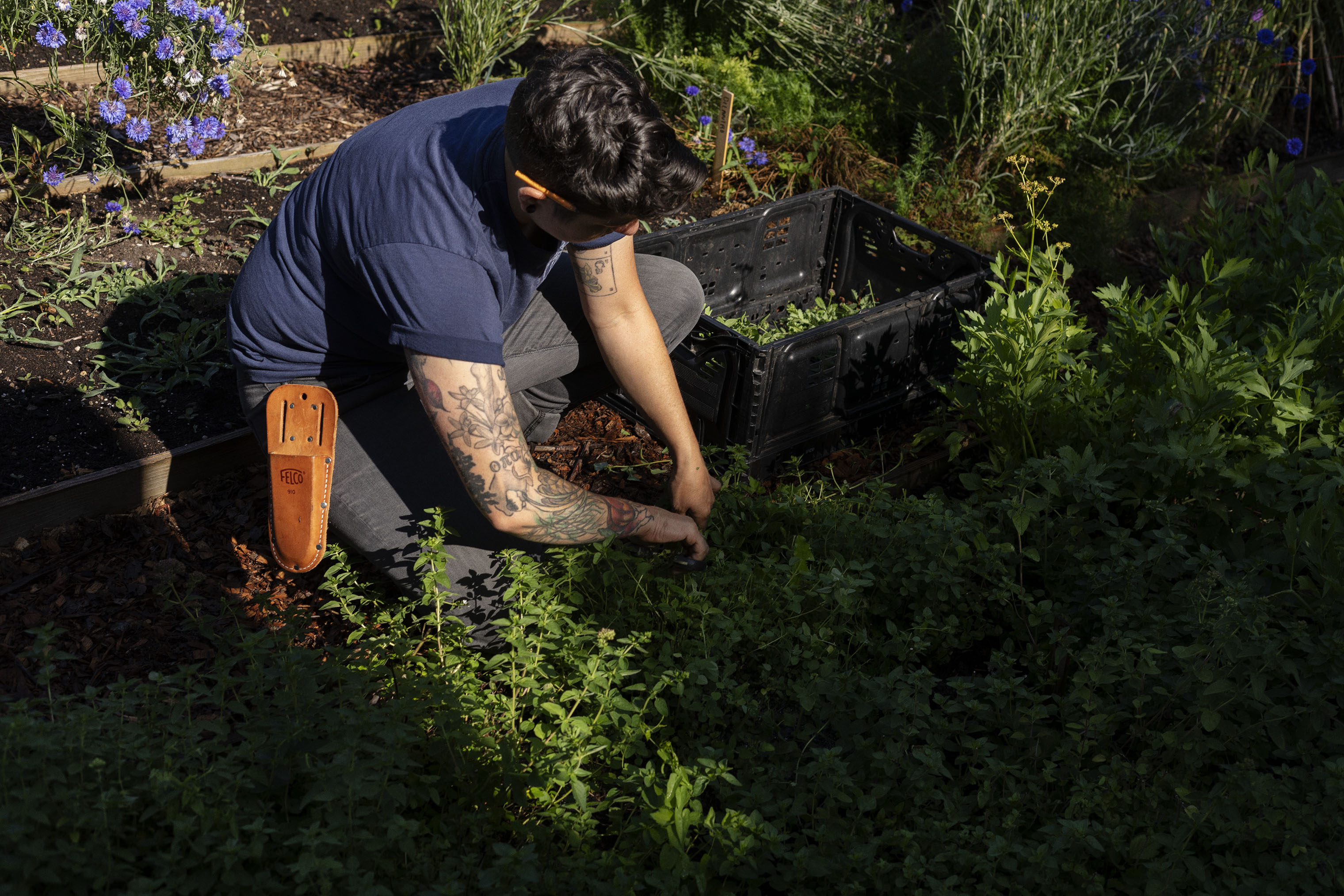 ‘We Created This Village.’ Breaking Bread With the Women Farmers of Portland

By Lucy Feldman | Photographs by Rose Marie Cromwell for TIME

Harvest starts at 6 a.m. on Tuesdays and Fridays at the Side Yard Farm & Kitchen in Portland, Ore. Stacey Givens, the 36-year-old owner and chef, brews a carafe of coffee in the catering barn where she cooks the produce they grow on site, and assigns tasks to her crew.

It’s unseasonably warm in Portland this July, hitting the 90s by midday, so farm intern Beth Craw drags a hose around to water the crops first thing. Grace Rahn sets to gingerly trimming the colorful heads off marigold, calendula and nasturtium plants, three of nine varieties that comprise the farm’s edible flower mix. Later, she’ll pack orange, yellow and purple blooms into plastic shell containers for delivery. Givens wanders her acre of land hunting for fennel pollen and seeds. She lops off whole heads at a time, spindly bouquets dotted with juicy clusters the color of sunflowers.

Women hold a significant place in Portland’s urban farming community — a stark contrast to many other parts of the country. A 2012 Department of Agriculture report put women at just 14% of principal farm operators across the U.S, but more than twice that in some parts of Oregon. Givens has a small army of female farmer friends who spend their days working, sweating and chatting side by side. They are the antithesis of desk dwellers; with their hands in the earth, they live free from the tether of screens. In addition to the two women on the farm, Givens employs 10 on the catering side. Then there’s her broader circle — a group of local farmers, chefs, bakers, pastry chefs and mixologists who get together to eat, drink, share business and practical advice, and collaborate.

This uniquely supportive community of women who know food is a welcome departure for Givens. She started her career in restaurants that often reinforced the stereotype that kitchens are notoriously sexist spaces. On the cooking line, men would grab her in passing, corner her in walk-in freezers and make lewd comments about her queer identity. “You don’t know who to turn to or what to say when you’re in a kitchen with all men,” Givens says. “Women farmers are lucky enough in Portland to kind of run the show here.”

By 11 a.m., Givens and her team will move everything to a shaded wash station and work together to clean and package the vegetables for delivery to a dozen local restaurants. The scent of onions wafts around the workers as Craw packs bright white cipollinis with long green leaves into plastic bags. She lays purple Japanese turnips on a rack and hoses them down, pulling the root hairs off each one by one. “These are beautiful,” she says, holding the vegetable close to her eyes. “They’re in the middle school stage of life.” Craw herself is undergoing a rebirth of sorts at age 36. A year ago, she left her high-pressure job as a traveling event marketer to pursue her lifelong dream of farming — her path to a simpler, more meaningful and more connected life.

Givens has built the Side Yard into a community gathering place, offering seed-to-plate brunches and cooking classes, as well as hipster events like farm yoga and bike-in movie screenings. Every other month, she hosts a bereavement group she calls the Lost Table, a meeting open to anyone struggling with grief. She started the discussions after losing her father to pancreatic cancer in 2011. “You’re surrounded by plants, flowers, nature,” she says. “It feels really soothing to be out here.”

A few blocks away, Givens’ wife Chelsea Willis, 32, wanders through the fragrant aisles of her greenhouse at the Sweet Delilah Farm. The two met when Willis signed up for a volunteer day at the Side Yard in 2016, and married six months later. Willis is a social worker focused on queer-, transgender-, non-binary- identifying youth coming out of the corrections system. She wanted to create an outdoor space where she could bring them to breathe. Givens encouraged her to take over a plot of land near her own farm. Turning to other women in the community for advice, Willis learned how to farm flowers. “We’re able to support one another’s adventures,” she says. “I’ve never been turned away when I needed help.”

Today, Givens has planned a rare gathering just for her circle. At around 3 p.m., when the sun is beating down directly on the crops, nine other women will begin to trickle in to prep for a lively dinner, each with her own home-grown contribution in hand.

Willis carries in a mountain of cosmos, dahlias and goldenrods for a flower installation she’ll drape above the table. Jme Holub, who lives on the Flying Coyote Farm with Lili Tova arrives with a bucket of indigo and teaches some of the others how to dip raw silk in the dye to create napkins.

Sally Bowers, who works at local ice cream shop Salt & Straw, sequesters herself away in the sweltering catering barn. She sweats over a berry buckle — the “buttery love child” created when coffee cake meets cobbler. Kusuma Rao, the chef behind the Portland and Tucson, Ariz., pop-up restaurant Ruchikala, watches over the smoking outdoor oven where she’ll bake spice-filled breads inspired by the Indian dishes her mother used to cook. Farmer Mary Ellen Ryce tends the grill, keeping a watchful eye on the wood-fired pork spinning over a waiting bed of cabbage. Althea Potter, chef at a nearby wine bar, whips up a garlicky risotto while local mixologists and partners Malia Myers and Melaney Schmidt shake up arugula cocktails.

See more stories from this project, Women Across America: A TIME Road Trip.