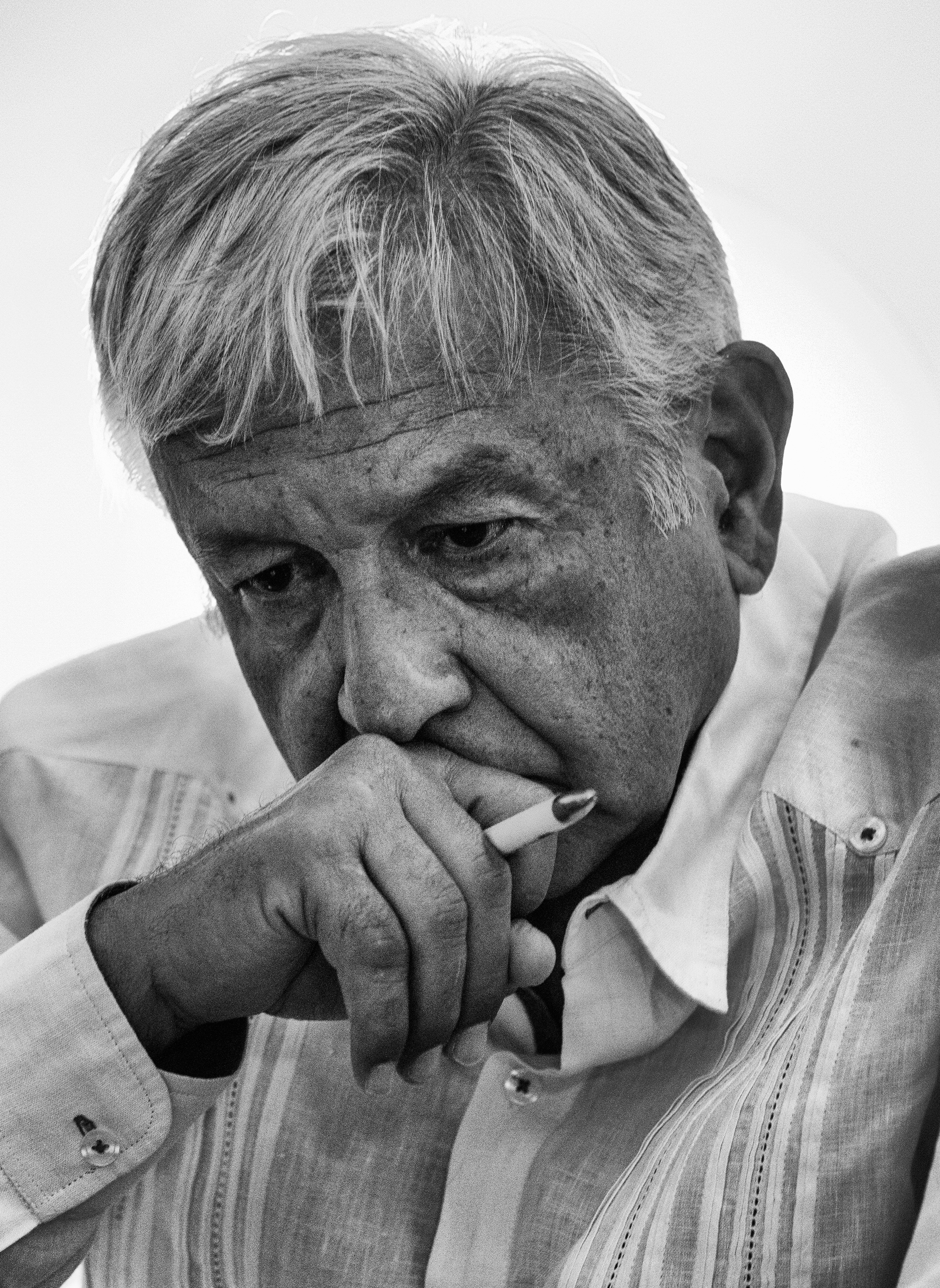 López Obrador works on a final campaign speech—which he would deliver at Estadio Azteca on June 27—on a commercial flight to Cancún ahead of the July 1 elections.
Christopher Morris—VII for TIME

The Populist of the Pueblos Gets Ready to Shake Up Mexico

When he played baseball in this steamy village where he grew up, the teenage Andrés Manuel López Obrador was known by his teammates as El Molido, or the Grinder, and is remembered for his ability to clobber the ball far into the bushes.

Others in the village of Tepetitán, especially the elders, would refer to this son of local shopkeepers as Nesho, an affectionate way of saying Andrés. As he rose in local politics, his supporters gave him a new name, Peje, after the tough pejelagarto fish that swims in the surrounding swamps. When he shot up to become mayor of Mexico City, TV pundits dubbed him AMLO, adjoining his initials to save breath. On July 1, he will likely earn yet another tag—El Presidente—as the new leader of this nation of 130 million.

Polls predict that López Obrador will win the race with a home run—beating Ricardo Anaya, of the center-right National Action Party, or PAN, by two votes to one. That result would be an upheaval in Mexican politics, giving the country its first truly leftist leader since Lázaro Cárdenas in the 1930s, who expropriated oil from American and British companies. It would place a leftist nationalist over the Rio Grande from Donald Trump, who has promised to tear up trade deals with Mexico and erect a wall at the border to keep out “bad hombres.”

López Obrador works on a final campaign speech, alongside his Press Secretary César Yáñez, on a commercial flight to Cancún ahead of the July 1 elections.
Christopher Morris—VII for TIME

As López Obrador has soared toward the highest office in the land, he has campaigned mostly in the pueblos—small towns and villages like his native Tepetitán. It is here that López Obrador’s brand of leftist nationalism can be best understood. Many pueblos have been hit hard by the downside of globalization, their craft trades wiped out by factory-made imports, their farmers crushed by agribusiness, their young trekking to the U.S. to lay bricks and pick fruit. In their plazas, López Obrador has promised crowds that he would revive the pueblos and their people, building roads, repairing schools, paying for pensions and subsidies.

“I have a dream that there isn’t emigration, that Mexicans can work and be happy where they were born, where their family is, where their culture is,” López Obrador told a rally in Jerez, Zacatecas, giving a nod to Martin Luther King Jr. “And those who want to leave go because they choose to, not out of necessity.”

Mexico may soon discover if a switch in direction to a more nationalist state-driven economy will uplift the poor and quell the violence as López Obrador says it will—or whether it will backfire and push Mexico even deeper into a hole.

A group of people at one of López Obrador's final campaign rallies in Campeche, on the Yucatán Peninsula, on June 26.
Christopher Morris—VII for TIME
Supporters hold up their mobile phones during a musical performance at López Obrador's final campaign rally at Estadio Azetca in Mexico City on June 27.
Christopher Morris—VII for TIME

The Mexico in which López Obrador grew up in the 1950s and ’60s offered entirely different prospects than today. The economy enjoyed a rate of growth that topped 10% some years, and pueblos were romanticized by moviemakers as the quintessential habitats of Mexico. Tepetitán, in the state of Tabasco, was a close-knit community whose older residents remember feasting on fresh fish and enjoying riverside dances. López Obrador still speaks with a hint of a local accent and sprinkles folksy terms into his speeches, adding to his appeal as a man of the people. Once, he told former President Vicente Fox to “shut up, chachalaca,” referring to a noisy bird that flaps around the swamps.

After graduating from college with a degree in political science, López Obrador soon joined the Institutional Revolutionary Party, or PRI, which ran Mexico for most of the 20th century. However, as the PRI veered to more free-market politics, he broke away to help found the left-leaning Democratic Revolution Party, rising to become its mayor for Mexico City in 2000.

His ambitions for national office were repeatedly thwarted, however. He lost his first run for President in 2006 by just 0.6% of the vote, after which he accused the government of fraud and blocked streets for months in protests. In 2012, he lost again, this time to Enrique Peña Nieto of the PRI, by a wider margin of 6%, and unsuccessfully challenged the vote in the courts.

So he began taking his message directly to the people, visiting every one of Mexico’s 2,464 municipalities and building a vast network of grassroots support. Manuela Obrador, a cousin who is standing as a federal deputy in the town of Palenque, described how they set up committees in barrios, ranches and jungle villages. “He goes to the pueblos because the closeness to the people is what he is looking for,” she tells TIME. “He goes into the communities, he walks in them. That makes him different, that makes him sensitive. He really sees how the communities are.”

López Obrador greets a young girl in a departures lounge at the airport in Campeche, following a campaign rally, on June 26. He made three final stops on the Yucatán Peninsula before heading back to Mexico City.
Christopher Morris—VII for TIME

López Obrador’s third run for the presidency took root in 2014, when he formed his own political party, the Movement for National Regeneration, or Morena, an acronym which also means “dark-skinned woman.” Political scientist Frederico Estevez says this name sends a subtle message to the majority of Mexicans, who tend to be darker skinned, while the wealthy elite are often whiter. “It is very clever marketing,” says Estevez. “He doesn’t need to say anything, but the argument is there, playing on identity politics.”

As López Obrador built his network of grassroots support into a popular movement, disenchantment with the ruling government blossomed. Peña Nieto led structural reforms, finally allowing private foreign investors back into the oil sector. But growth has been modest. Meanwhile, the administration has been plagued by corruption scandals, and the murder rate has hit record levels. Peña Nieto’s approval rating hovers in the 20s, and the PRI’s presidential candidate, José Antonio Meade, trails in third place.

Like a U.S. politician name-checking the Founding Fathers, López Obrador tells crowds that he aspires to be a Mexican President like the revered historical figures Benito Juárez, Francisco I. Madero and Cárdenas. He claims he will pay for his promised social programs by eliminating corruption and slashing bureaucracy, including selling the executive air fleet, and will instead travel by land or commercial jet. He says he will tackle drug violence by inviting Pope Francis to Mexico to help forge a peace plan. He promises to move out of the presidential palace, which he says has “bad vibes,” and settle in an older building closer to the people.

López Obrador promises more subsidies for small farmers so they can better compete with American imports of foodstuffs such as corn and make Mexico more food sufficient. But he has stopped short of calling for a trade war with the U.S. in response to President Trump’s raising tariffs, saying he agrees with him that Mexican workers should be paid more. Mexico is the third largest trading partner of the U.S., with $557 billion worth of cross-border commerce last year.

How radical a President López Obrador would be is a matter of intense debate in Mexico. Some call him a change for good, others a messianic Chavista. Estevez says fears of a Venezuela-style crisis are overblown. “In American terms, he is a Bernie Sanders,” he says. “I don’t concede that all populism is undemocratic in its nature. When you have a long generation of elite failures, you need to nudge the rug to change things.”

Journalist Sergio Sarmiento, who moderated the first presidential debate, believes López Obrador is more like Trump. “They both believe you have to manipulate markets to protect workers. They both believe you can do that by simply making decisions from the presidency,” Sarmiento tell TIME. “Trump is putting fear in many Mexicans, and this is helping López Obrador, because they believe he’s going to be more nationalistic.”

Although Trump and López Obrador sit on opposite ends of the ideological spectrum, each belongs to a group of politicians who present politics as a conflict between elites and the people, whom they claim to represent. Many liberal academics see this loose group of populists as a danger to democracy, citing the swing to authoritarianism in countries like Turkey, Venezuela and the Philippines. In Mexico, critics of López Obrador use the term as a criticism. “No to populism, no to the scam, no to demagogy,” said former President Fox in one of a series of anti–López Obrador videos he released this year.

López Obrador responds by saying his elite critics just don’t understand the movement he has built. “This populism is a tale to frighten,” he told a thronging crowd in the pueblo of Actopan. “They don’t even know what populism is … they fail to define it conceptually.” His chance to prove them wrong will likely start beginning July 1, when voters are expected to hand him the presidency after years of tireless efforts. But turning his promises into policies as President of Mexico could be his hardest run yet.