Mexico Is Suffering Its Bloodiest Year in Modern History. Here's Why

Relatives and friends of the mayor of the Mexican community of Petatlan, Arturo Gomez, carry his coffin during his funeral in Petatlan, Guerrero State, on December 29, 2017 a day after he was shot dead while dining at a restaurant. An armed group killed mayor Gomez in the convulsed state of Guerrero in southern Mexico, according to the security spokesman for the Guerrero government Roberto Alvarez.
Francisco Robles – AFP/Getty Images
By Ciara Nugent

The cycle of bloodshed that has gripped Mexico in recent years is again reaching record peaks. On average, someone was killed in Mexico every 15 minutes during the month of May, putting the country on track to surpass last year’s grim milestone of 29,168 killings.

The extent of the violence, and other types of crime, have pushed the issue to the top of the political agenda ahead of national elections on July 1. Political killings have also shot up, with 130 politicians, including 48 candidates for office, murdered since the beginning of the electoral cycle in September, according to political consultancy Etellekt. What is behind the violence?

1. Police are in short supply

Mexico suffers from a chronic police shortage, with 116,000 positions unfilled around the country. The Government Security Agency says Mexico only has around half of the police it needs right now.

A key reason for that is low pay; local police forces in Mexico earn an average of $460 a month, slightly less than the national average wage. “The police career is not a professional one,” Gerardo Rodríguez, a professor in security at the University of the Americas, tells TIME. “Who would want to be on the front line against the drug cartels if there is no professional career or sufficient payment or support for them and for their families? That’s the reason local governments are relying on the Mexican army to be in the streets right now.”

Troops have been serving as police since December 2006, when then-president Felipe Calderon launched a crackdown on drug cartels. In December 2017 lawmakers passed an “interior security law” giving them an official role in policing. Human rights groups criticised the move, saying the army were not properly trained in dealing with civilians.

2. Gangs have fragmented, and moved into new areas

Since the crackdown on cartels began, many important drug kingpins have been arrested, leaving gangs to fight among themselves and fragment. That has lead to more, smaller gangs who are competing over the existing drug trade infrastructure – such as transit passes and good sites for building laboratories. Faced with that competition, gangs are being driven to diversify their business. The famous Sinaloa cartel, for example, has invested heavily in the production of fentanyl, a new synthetic opioid considered to be 25-50 times stronger than heroin.

“The issue of organized crime in Mexico has really evolved – it’s no longer only drug trafficking groups but also gangs with other origins,” says Rubén Salazar, the director of Etellekt. Many gangs now make money by robbing freight trains and extorting money from civilians, both of which increase the potential for violence, as does another recent criminal trend in Mexico: the illegal extraction of oil, or “huachicoleo”, a phenomenon that has gone up by 790% in the last five years, according to state oil company Pemex. They say a pipeline is illegally tapped somewhere in the country every 90 minutes. People siphon off oil, transport it and resell it, employing and implicating large numbers of people in criminal networks in the process.

The arrest in June 2017 of twelve mayors from Puebla state on suspicion of involvement in a fuel-stealing ring exposed another worrying facet of Mexico’s security problem – the infiltration of criminal elements in local politics. Salazar says this has lead to a surge in political violence. “The number of attacks against against politicians went up by more than 2400% between 2012 and 2018,” he says. “The vast majority were aimed at local politicians.”

Salazar says the federal government in Mexico has lost control of local governments, leaving local politicians to get involved in criminal activities. “These local powers are trying to transform themselves into practically feudal states,” he says. “What we are seeing at the moment is a deliberate employment of violence as a political tool, as not only organized crime groups but also local political groups try to perpetuate themselves in power, controlling government structures, as well as lands and both legal and illegal activities, through violence.”

On June 25, the entire police force of the town of Ocampo was disarmed and detained by state police, on suspicion of having orchestrated the murder of a mayoral candidate.

“This is very serious because it could throw the quality of Mexico’s democratic governance into question,” warns Salazar. “What could happen is the formation of authoritarian governments on a local scale.”

4. A weak government … and little prospect of change

Voters are overwhelmingly dissatisfied with the state of Mexican security. “Violence is the number one issue for voters, above the economy, above inequality,” says Rodríguez. “The federal system just isn’t functioning right now in Mexico.”

In continuing his predecessor’s military strategy against the cartels, President Enrique Peña Nieto has bypassed local and regional authorities, ploughing money directly into the pursuit of kingpins – “Mission accomplished,” he tweeted when news broke of the capture of notorious Sinaloa cartel leader Joaquín “El Chapo” Guzmán in 2016. But many say this headline-grabbing, top-down strategy has worsened every aspect of the security problem, diverting resources from local police, fragmenting gangs and making local governments less accountable.

That has cost Peña Nieto’s ruling Institutional Revolutionary Party (PRI) dearly in the polls. The PRI ruled Mexico for much of the 20th Century, but now their presidential candidate in July 1’s elections, José Antonio Meade, is trailing in third place.

Frontrunner Andrés Manuel López Obrador describes the country as being “at war”, and has pledged to eradicate the violence by the middle of his first six-year term. “My opponents think everything can be resolved by force,” he said at a conference in May, highlighting his own “liberal view” on security. He wants to tackle the social exclusion that leads to crime and to offer a partial amnesty from prison for some involved in drug gangs, favouring social work and public service as alternative sentences.

But other candidates and the media have said the plan “guarantees impunity” to criminals. He has also pledged to create a new national guard, keeping soldiers and marines permanently involved in policing. “It’s a very questionable idea,” says Salazar, “because soldiers aren’t trained to do what police do, and police aren’t trained to use army-level weapons against gangs. It could cause lots of violations of human rights.”

With the next president not due to take office until Dec. 1, and few concrete strategies to address the violence, there’s unlikely to be a solution any time soon. “It’s a perfect storm,” Rodriguez says. 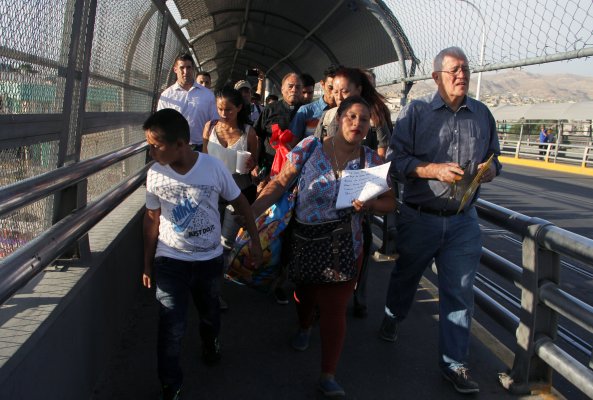 Why Refugees Will Keep Coming to the U.S. Despite Trump's Crackdown
Next Up: Editor's Pick