Your Complete Guide to Mexico's 2018 Elections

Mexico heads to the polls Sunday in national elections that will likely mark a sharp change in the political direction of Latin America’s second largest economy. It comes at a time of disillusionment for many: incumbent President Enrique Peña Nieto is deeply unpopular, as is his rightwing Institutional Revolutionary Party (PRI), which has ruled Mexico for 77 of the last 90 years.

The favorite to replace Nieto is Andrés Manuel López Obrador, a populist who would be Mexico’s most leftwing leader in 80 years. His victory would constitute a major upheaval in a country currently battling unprecedented levels of violence, corruption and inequality. It would also set the stage for confrontations between two fierce nationalist populists, with U.S. President Donald Trump on the other side of the Rio Grande.

With so much at stake, the campaign has been dramatic. Violent attempts to control local politics by gangs and criminal groups have resulted in the murder of 132 politicians since September 2017, including 48 candidates for office.

But young people in Mexico have also mobilized on an unprecedented scale. Almost half of Mexico’s 72 million eligible voters are under the age of 39, and a staggering 14 million are voting for the first time. They hope their votes can help address the violence and corruption that have cast a shadow over politics for so much of their lives.

When is the Mexico election?

Mexico has presidential elections every six years, with presidents only able to stay on for one term. This year’s voting will take place on Sunday, July 1, with results expected by Monday morning.

It will be the country’s biggest ever day of voting, with more than 3,400 seats up for grabs at a local and state level, including 128 senators and 500 members of the Chamber of Deputies.

Who are the candidates running for president of Mexico?

The 64-year-old, known in the media as Amlo, has for years been one of the best-known politicians in Mexico. He has already run for the presidency twice before, losing both times by relatively small margins. But this time around, his folksy brand of leftist, Mexico-first rhetoric looks to be a winner: he is projected to take twice as many votes as his nearest rival.

Running as the head of his National Regeneration Movement, or Morena, the leftist would take a hard line on Mexico’s endemic corruption. He has said that under him the government “will no longer be a committee at the service of one group, but a true representation of the people.” He pledges to move out of the presidential palace into a more modest, older building, bolstering his image as a fighter against inequality.

López Obrador has pledged to prioritize the rural and indigenous groups that have been neglected by previous governments, promising infrastructure programs and fixed price for agricultural projects. He also wants to offer free education for the young and larger pensions for the old.

All of these spending pledges have led critics to warn he would take Mexico down the path of Venezuela, whose leftwing populist leaders have overseen a disastrous economic and humanitarian crisis. But López Obrador says taxes will barely need to rise and that his programs will be paid for “with the savings from combatting corruption and cutting unnecessary costs.”

Ricardo Anaya seems to be the only candidate with any hope of upsetting López Obrador ‘s projected landslide. The 39-year-old has formed an unlikely coalition between his center-right National Action Party and two smaller center-left parties and is currently polling at around 26%. Known as a ruthless political operator, Anaya has launched withering attacks on both the PRI and López Obrador. He accuses the latter of wanting to change Mexico “with ideas that are very old, trapped in the past” and says his candidacy would be the only true break with the political establishment that has left many Mexicans frustrated.

He has proposed making the attorney general’s office independent from the government in order to prevent corruption and streamline justice. He has also suggested gradually introducing a universal basic income to tackle poverty. The proposal has divided Mexicans, with some saying it would be a lifeline for the poorest and others saying the numbers don’t add up in terms of cost.

Candidate for the ruling PRI, Antonio Meade has been unable to overcome voters’ frustration with his party’s failure to tackle crime and corruption. The 48 year-old former finance minister has worked is expected to come a close third. He has been close with President Peña Nieto, and has defended him against corruption allegations, but in May he was forced to admit his former boss had lost the fight against violent crime.

Meade has tried to present himself as a likeable everyman, pledging to build 3,000 badly-needed hospitals around the country, offer social security for domestic workers, raise the minimum wage and guarantee equal pay for men and women.

The inclusion of independent candidate Jaime “El Bronco” Rodríguez surprised many in the Mexican media after he was initially discounted for “irregularities” in the required list of signature he gave the National Electoral Institute. He has since been fined for illegal campaign financing.

He trails in a distant fourth place in the polls, with just 5%. But a small cohort of followers love Rodríguez for his hard line on drug cartels—for which he has nearly been assassinated twice. He denies being a far right politician, despite proposals to eliminate the minimum wage and bring in a death penalty for serious criminals.

What are the major issues at stake in the Mexico election?

Corruption has long been endemic in Mexico, with reports of local police shaking down civilians or politicians accepting bribes a near-daily occurrence. Nevertheless, it has emerged as a more salient issue after several high-profile scandals involving the ruling PRI. Nine former governors from the party are currently on or awaiting trial for corruption-related cases, including charges of money laundering and involvement in organized crime. In 2016 Peña Nieto’s wife was forced to cancel the purchase of a luxurious $7 million apartment in Mexico City after suspicions were raised that it had been paid for by an industrialist with hopes of a government contract.

The issue has fueled López Obrador’s popularity. His go-to move at rallies is to rail against the injustices perpetrated by the Mexican establishment. Other candidates have tried a similar tack but not nearly as successfully—Anaya has been accused of corruption himself while Rodríguez’s threat of “chopping of the hands” of politicians convicted of corruption has failed to impress outside of his small base.

May was the most violent month in modern history in Mexico, and 2018 is on track to surpass last year’s record 29,168 murders. Causes of the surge include a decade-long crackdown on drug cartels, which has caused gangs to fragment and diversify into new areas. A major shortage of police, with 116,000 positions unfilled across the country, has left Mexico’s streets more dangerous than ever.

The candidates all propose to overhaul the security system. López Obrador wants to create a national guard, which would give marines and soldiers a permanent role in policing Mexico’s streets, ten years after they were called in to help in the former government’s crackdown on gangs. This has worried human rights groups who say the army are not properly trained to deal with civilians. His other main security proposal, a partial amnesty for offenders and a focus on combatting the social exclusion which leads to crime, has divided a country where many have been terrorized by gangs. Anaya has focused his solutions on retraining police and investing in better technology to track criminals.

Mexico’s economy has seen sluggish growth of only around 2% per year. Oil prices have fallen, as has production at state oil company Pemex. The peso has fallen sharply against the dollar—in part because of investor concerns about the renegotiation of the North American Free Trade Agreement with the U.S. and Canada. With more than 40% of people living in poverty, a key issue is how a candidate plans to stimulate economic growth.

López Obrador’s promises to prioritize the most vulnerable in Mexican society is a key part of his platform. But he has also pledged to balance the budget within three years by reducing the salaries of public officials and canceling expensive projects like a new international airport. He says he would also keep markets “open” to foreign investment.

Anaya says his plan to introduce a universal basic income would stimulate growth and counter the problems of unemployment, though he has not revealed how he would pay for it. Meade wants to continue the PRI’s economic development strategy, attracting $29 billion in investment for the energy industry.

Do Mexican voters care about Trump?

Some would say Trump’s brand of xenophobic nationalism has done well for López Obrador. On June 19 he made an impassioned speech denouncing the Trump administration’s policy of separating children from families at the border, branding it “arrogant, racist and inhumane” and demanding that President Peña Nieto take international legal action against Trump. He will soon publish a book on his political vision, provocatively titled, Oye, Trump (Listen, Trump!) in Spanish, or A New Hope for Mexico: Saying No to Corruption, Violence and Trump’s Wall, in English. But most agree the domestic issues referenced in that title are far more important to Mexicans than what is happening north of the border. 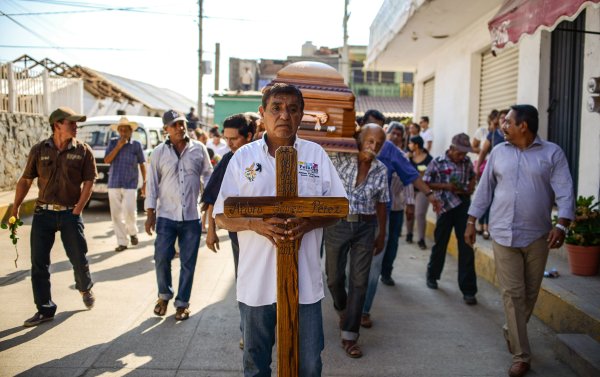