Was That Elsa from Frozen on Once Upon a Time?

This post contains spoilers for the season finale of Once Upon a Time.

First Frozen conquered the box office. Then it conquered the album-sales charts. The Oscars. The club. The Great White Way. Hearts and minds. Politics. Toy stores. And, ironically enough, it’s not letting go: the latest territory taken by the princess juggernaut is television.

Last night’s season finale of the show Once Upon a Time — which is on ABC, a network owned by Disney, Frozen‘s proud parent — went out with an icy bang. The two-part episode (“Snow Drifts”/”There’s No Place Like Home”) was mostly about the time-travel trope of avoiding any changes to the past in order to preserve the future, but that attempt to leave the past unaffected was unsuccessful, and something new has come into the show’s universe. Or, rather, someone:

Watch as the blue goo turns into a glove-wearing blonde in a sparkly blue gown with a cape — and then she freezes said goo. Though we don’t get to see her face, ABC isn’t exactly being subtle:

Neither the character nor actress are listed on the episode’s cast list — and it’s fairly common practice in these situations, where a mystery character is introduced but won’t be needed till later, to have a stand-in play the first appearance and sub in the real actor when a face is seen — but all the clues are there that this isn’t just any fairy-tale ice queen.

For fans, the question raised is whether Elsa will be a good queen (everyone loves Elsa!) or an evil queen (she’s sure acting evil). Anyone who’s seen the movie knows that the line isn’t always so clear: others can see evil when you’re just being yourself, and snowy mischief doesn’t necessarily indicate a cold heart.

For the rest of the world, the question is slightly different: what will Elsa’s non-television world look like by the time she shows up on TV again? When Once Upon a Time returns in the fall, it will still have been less than a year from Frozen‘s debut to Elsa’s TV incarnation — and that’s an incredibly fast turn-around. Unlike most of the show’s stalwarts, she was entirely unknown to audiences just a few months ago; though she’s inspired by a Hans Christian Andersen tale, it’s a loose link. Even Once Upon a Time‘s homegrown characters are older than she is.

Still, the season of summer blockbusters, with characters who could unseat Elsa from her cultural throne, has yet to really kick off. That leaves her in a weird in-between category: she’s neither a classic fairy-tale character nor a super-recent, buzzy addition. But Disney and ABC clearly think that Frozen-mania will survive the coming summer, and that Elsa will still be a hit a few months from now. It would be a rarely seen velocity of cultural saturation, but the film has yet to hit a bump it couldn’t overcome. Appropriately, only time will tell whether that cold front will continue. 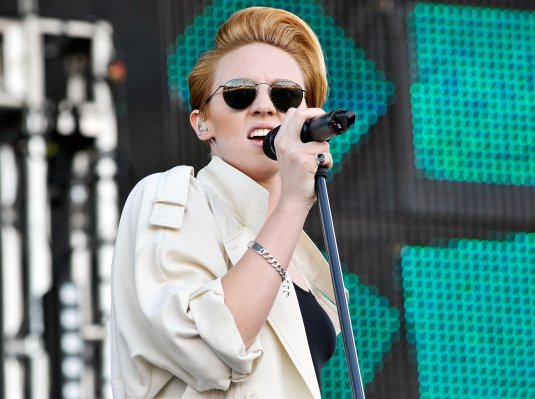 La Roux Synthpops Up Again With "Let Me Down Gently"
Next Up: Editor's Pick