The Critical Role of Public Defenders in a Post-Roe v. Wade World

The debate over fetal rights is an old one, and at least 38 states already have some form of fetal-harm laws in place that make it a crime to hurt a fetus. Under Roe v. Wade, these laws are required to exempt abortion from punishment. But if Roe is overturned – and a leaked draft of a Supreme Court opinion suggests that’s a real possibility – the landscape of protection will change dramatically.

If Roe falls, the Court’s attack on our rights won’t stop at medical clinics. It will rip through courtrooms throughout the U.S., as people with uteruses try to defend themselves – and their liberties – against the patriarchal jaws of the legal system. Anti-abortion trigger laws and the increasingly vicious laws in discussion around the country could result in women being held liable for any act that might threaten the life of their fetus. This means if prosecutors want to go after a woman, they can claim the aspirin she took for a headache was an abortifacient. Cops could claim a car accident, a failure to follow medical advice, or a horrible fall down the stairs was an attempted abortion, and thus an illegal act. Even a skeptical – or racist – nurse could report a patient in the midst of a miscarriage to law enforcement, alleging that her bleeding was the result of an abortion. We already see this kind of junk science running rampant in family court, and we can expect more of it here.

A person who can pay for a lawyer can also likely afford to leave their state to seek out health care, so a woman who lives in a red state, wants to terminate a pregnancy, and has sufficient means may be able to travel to a blue state for a procedure. Additionally, our criminal legal system is designed to entrench privilege and power: the wealthy, white woman coming to her doctor’s office in the midst of a miscarriage is much less likely to have a suspicious receptionist call the cops on her than a low-income Black or Brown person. We know this because we’re now operating at the intersection of the existing bias within our medical system and the toxic racism of the criminal legal system — a combination which, like our current family policing system, is most likely to target women of color.

This means that we can expect the large majority of people facing criminal charges for obtaining illegal abortions or wrongful accusations because of their pregnancy outcome will be defended by public defenders. It’s worth noting that 80% of accused people are represented by public defenders or other court-appointed counsel, and as the wealth gap increases, this number will only rise.

Of course, in light of this extraordinary infringement on basic liberties, the first priority must absolutely be to dedicate resources to abortion funds and providers. But to protect as many people as possible from the criminal impacts of these cases, it is also critical that we immediately loop in the public-defense community.

Medication abortions now account for more than half of all abortions in the U.S. As a result of this shift away from clinic-based abortions, Republican-led states have reduced access to abortion pills, and progressive activists and officials have been working for years to push back. If abortion becomes illegal, this means that the simple act of mailing an abortion pill to a person in a red state might constitute criminal behavior in the eyes of the law.

Thankfully, this won’t stop abortion-rights activists from doing so. But the result is going to be criminal cases stemming from possession and distribution of medication as well as cases arising from criminalized pregnancy outcomes. Businesses seeking to understand how their efforts to distribute abortion pills could spur prosecutions should spend the time and resources needed to connect with public defenders in conservative states and gain a better understanding of what activities fall within the bounds of the law and what potential outcomes lie ahead for both the business and prospective abortion recipients—and how to mitigate the risks.

Many public defenders offices already connect clients with health care services and aid clients in accessing highly confidential forms of care such as substance use and mental health treatment. We must also leverage these networks to provide protection in the form of legal counsel to those who risk prosecution to provide health care to women. This group goes far beyond providers (many of whom may retain their own counsel) and patients and includes loved ones, Uber drivers, information networks of mutual aid, and community groups.

Read More: If Roe v. Wade Is Overturned, Our Clinic Will Stop Providing Abortions Immediately. But We Won’t Shut Down

Additionally, across the board, more of our clients will become unwillingly pregnant. Whatever their charge, they will be navigating police and jails – as well as their own housing, employment, and treatment needs – while carrying a baby they did not plan or want to have. In short, we’re going to be defending new types of charges, but also need to be doing more for our clients accused of crimes unrelated to their pregnancies. We’ll need to expand access to counsel, increase forensic expertise, provide more interdisciplinary care like health-services navigation and help clients access a broad array of social supports.

Many of these new post-Roe cases will look familiar to public defenders: medication-possession cases that boil down to holding a couple of pills. This means the legal fate of those charged for seeking out or receiving abortions will come down to one main thing – evidence. App data. Google searches. Packaging. Materials left behind after the use of abortion medication. Public defenders have the exact skill set needed to build essential safeguards into pro-abortion programs, and they can leverage their Fourth Amendment expertise to get illegally obtained evidence suppressed.

To protect those seeking to end pregnancies, we must also double down on the fight to get people lawyers earlier. Expanding early access would mean making it possible for someone to proactively seek out the legal counsel of a public defender before their life is turned upside down by the criminal legal system. This would look like giving a newly pregnant, terrified, low-income person the ability to call a public defender when they aren’t sure what paths – legal or otherwise – lie before them. Being charged with a crime shouldn’t be a prerequisite to receive legal advice. After all, it’s not uncommon for wealthy Americans to have lawyers on retainer, and many call their lawyers whenever their hearts desire.

Read More: The State of Abortion Rights Around the World

Bolstering funding for in-house forensic expertise is also essential. Many abortion cases will boil down to fights about the functions and scientific makeups of certain herbs and medications or the causation of a miscarriage. Public defenders will need to be able to cross-examine prosecution-side chemists or doctors who claim they can link miscarriage to a particular drug, and to do so, they will need to have a better understanding of the science and better access to labs.

Finally, this attack on our bodies will also constitute an attack on this country’s poorest and most vulnerable families. We must strengthen family defense to protect not only child-bearing parents, but also their children. After all, in a state where abortion is illegal, a pregnancy loss and subsequent charges likely will put a parent’s custody of their children at risk — particularly if that parent is a low-income person of color. To strengthen family defense, we must increase state funding for family defenders or build family-defense divisions within existing public defenders’ offices. From there, by reducing the wait times parents face for free lawyers, we can help limit the number of life-altering days that parents are forced to be separated from their children while navigating illegal abortion charges.

These days, it’s easy to forget that anyone once saw the Supreme Court as an apolitical body ensuring American people the promise of equal justice under law. But as long as the Sixth Amendment stands, public defenders will use every resource at their disposal to protect people from the unchecked overreach of their government. And they will need our support now more than ever. 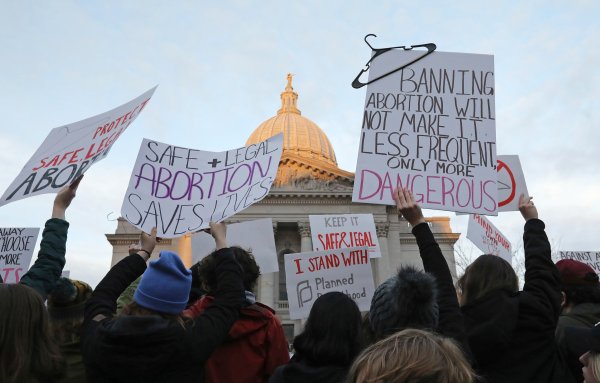 In Wisconsin, an 1849 Abortion Ban Could Make for a Chaotic Post-Roe Landscape
Next Up: Editor's Pick