Why Must Women Wait for the Supreme Court to Decide What We Can Do With Our Bodies?

Illustration by Anna Godeassi for TIME
Ideas
By Lyz Lenz
Lyz Lenz is the author of Belabored: A Vindication of the Rights of Pregnant Women

I knew what abortion was even before I knew how babies were made. As a child in the hot brick Baptist churches of Texas, I was told that there were women who threw babies in the trash. That there were women who were so selfish that they murdered. My mother showed me pictures of fetal remains. At church, we prayed for the lost lives. And on the anniversary of Roe v. Wade, my parents would march their five, then six, eventually eight children down the streets of downtown Dallas to protest abortion, our small bodies lost in a sea of signs declaring “God hates abortion” and images of milky-pink whale-like fetuses.

In high school, before I even understood the depths and pleasures of my own flesh, I watched boys and teachers stand up and debate whether I should have the right to choose what happens to me. My life always weighed in the balance against potential life, and the unformed life always seemed to win against my actual existence. My junior year of high school, in American government class, I was assigned to debate a boy on whether abortion should be legal. I had to argue it should be. He argued against. The vote went to the rest of the class and he was popular, so I lost. I cried in the bathroom after, not just because I hated losing, but because I felt humiliated that somehow my rights, my body, my life was a matter of public debate, of “seeing both sides” instead of seeing my humanity.

Existing as a woman in America means watching a parade of state legislators stand up every year and debate bills that restrict your body and therefore how much say you have over the direction of your life. These bills are argued in courts, online, in classrooms and on opinion pages. Our bodies are not simply our bodies. They are the part of the discourse.

Read more: Why Abortion Pills Are the Next Frontier in the Battle Over Reproductive Rights

In 1973, the Supreme Court, citing a woman’s right to privacy, ruled in Roe v. Wade that a woman has a constitutional right to an abortion. In 1992, the Court reaffirmed Roe in Planned Parenthood vs. Casey and said that states cannot ban abortion pre-viability, meaning before the fetus could live outside the womb. This has been the standard ever since. These rulings have never meant that every woman could get an abortion when she needed it, as many low-income women, particularly in red states, are still unable to access the procedure due to regulations that have imposed prohibitive barriers. But for nearly 50 years, Roe was precedent. Settled law, as Brett Kavanaugh told Susan Collins less than three years ago.

Except maybe not. On May 17 the Court announced that it would hear the case of Dobbs vs. Jackson Women’s Health Organization, a challenge to a Mississippi law banning almost all abortions after 15 weeks, which clearly violates Roe because a fetus is not yet viable at that point in pregnancy. Days later, Texas Governor Greg Abbott signed one of the nation’s most restrictive abortion laws, banning the termination of pregnancy as early as six weeks and allowing private citizens to sue abortion providers as well as anyone who “aids and abets” an abortion patient, including by paying for the procedure. It is scheduled to go into effect in September. Although states have passed bans on early abortion before, courts have blocked or struck them down because they are blatantly unconstitutional. But Abbott and other Republican lawmakers are betting on what so many women have known their whole lives: There is no settled law in this area. Our bodies are an eternal battlefield.

We may not get a decision in the Dobbs case before June 2022. And so we are, for now, in limbo. But while this moment is different from ones in the past, as the Court is now stacked with six conservative justices, including its newest member Amy Coney Barrett, and there’s the very real possibility that Roe will be overturned, it is also the same. We have never had full control. We have always known what little we had could be taken away.

I’ve thought a lot about that conversation in this year consumed by a public health crisis and a reckoning with the racism that built our nation. How too few people are allowed to exist in their bodies without commentary or interference. I adopted not one but two pandemic dogs and spent long hours walking them listening to Call of the Wild and Julie of the Wolves on audiobook. Each of those books made me cry, because I realized that dogs, wolves, have something I don’t, the ability to just be flesh. It’s silly, but it’s not.

I know that whatever the Supreme Court decides does not have to be the final word. Given the timing of the ruling, abortion will likely a midterm-election issue, though misogyny can be as motivating a political force as the loss of bodily autonomy. (Nearly one in four Americans say they will only vote for a candidate who shares their views on abortion.) But with the right leaders in place, Congress could pass a law shoring up the rights granted by Roe. If we put enough pro-choice politicians in state and federal office, the Equal Rights Amendment could finally be ratified. These advancements are not impossible, yet they feel so monumentally so far away.

Read more: How Many Personal Stories Must Women Share to Convince Others of Their Humanity?

As we crawl out of the tunnel of a pandemic, where the inequity of our political system was laid bare and we saw firsthand how little a society that forces women to have children actually values mothers, it can be hard to feel hopeful. It’s especially hard when it feels like we’re just waiting to be told if the rules about our own bodies have changed.

Twenty-five years after I moved away from Texas, another young woman from the state stood up in front of her peers and demanded her own autonomy. Paxton Smith, valedictorian at Lake Highlands High School in Dallas, replaced her approved speech with one that signaled that the fight over women’s bodies is just as ferocious as it has ever been. “I’m talking about this today — on a day as important as this, on a day honoring 12 years of hard academic work, on a day where we are all gathered together, on a day where you are most inclined to listen to a voice like mine, a woman’s voice — to tell you that this is a problem, and it’s a problem that cannot wait,” she said. “I cannot give up this platform to promote complacency and peace, when there is a war on my body and a war on my rights.”

We are all tired of protesting and explaining and pointing and shouting and asking for change, tired of asking to simply be allowed to exist in our bodies. It doesn’t mean we will stop. What choice do we have? This is the fight of our lives. The fight for our lives. 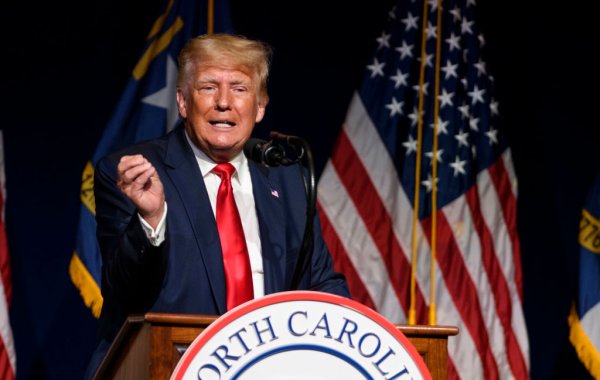 Can We Rein in the Power of the Presidency After Trump?
Next Up: Editor's Pick