One could almost hear the sighs of relief, from Paris to Brussels, and all the way to Washington, as French leader Emmanuel Macron clinched another five-year term in the Elysée Palace. Though polls narrowed during some points leading up to Sunday’s runoff, Macron beat out far-right nationalist Marine Le Pen in the presidential elections—a contest that risked shattering the Western alliance against Russia, and jeopardizing the very survival of the European Union.

Macron’s victory over Le Pen—with 58.2% of the vote to her 41.8%, according to estimated results released at 8 p.m. local time after polls closed—was significantly smaller than the two politicians’ last face-off in 2017. Back then, 39-year-old Macron shot to power as an outsider, with a 32-point lead over Le Pen, by promising to modernize what he called a sclerotic, over-regulated country.

In the past five years, he streamlined French labor laws, making it easier for companies to hire and fire people, and scrapped the wealth tax. But he was forced to drop an increase in fuel tax, when the plan sparked the so-called “yellow vest” movement, with explosive protests that rocked the country for months in 2018 and 2019. Then came COVID-19 in 2020, with nationwide lockdowns, in a pandemic that has so far killed 142,000 people in France. And as that receded, the Ukraine war broke out, thrusting Macron into the role as the E.U.’s major conduit to Russian President Vladimir Putin.

Read More: Emmanuel Macron Is on Track to Win Re-Election. What Comes After Could Be Tougher

For all that, Macron, 44, pulled off an impressive feat: He is the first French leader in 20 years to win reelection—since 2002, when then-president Jacques Chirac won against Le Pen’s rabidly anti-immigrant father, Jean-Marie Le Pen, who faced a wall of opposition that blocked his path to power.

Macron managed that despite barely campaigning for months, preferring instead to play the global statesman in the buildup to Russia’s invasion of Ukraine. Then over just a few weeks, Macron sprinted across France, warning voters that a Le Pen presidency would ravage their cherished humanist principles, and render the 27-country E.U. untenable. “April 24 will be a referendum for or against Europe, and we are for!” he told thousands of people in the closing hours of the campaign on Friday, standing in a marketplace in the southern village of Figeac, amid a sea of blue E.U. flags in the crowd.

Yet even so, his shrunken margin of 16.4% of victory signals the fraught political divide he now faces, as he settles back into the Elysée–problems that could play out in the country’s parliamentary elections, which take place in just seven weeks’ time.

“The third round starts tonight,” said the far-left leader Jean-Luc Mélenchon, after the polls closed, referring to the elections for the National Assembly in mid-June; Mélenchon won 22% of the vote in the first round of the presidential election on April 10, narrowly missing the run-off against Macron.

Likewise, Le Pen made it clear her party would immediately begin campaigning for parliamentary seats. “Our historic score puts our camp in an excellent position,” she said in her concession speech Sunday night.

Indeed, Macron’s speech to the crowds gathered in front of the Eiffel Tower was more contemplative than celebratory. “I know many who voted for me did not do so because they support me, but because they wanted to block the far right,” he said, admitting he would need to heal deep divides. “There has to be found a response to the anger and disagreements,” he said. “That is my responsibility.”

No longer the wunderkind, Macron will need to reckon with roiling anger over his business-friendly policies, including his determination to raise the public-pension age. And there is also the deep personal dislike of Macron among many French, who describe him in numerous opinion polls and to journalists as arrogant and aloof, and too hidebound to the interests of the rich. “He will have to demonstrate he is not going to govern as he did during his first term–quite alone,” Marc Lazar, political history professor at Paris’s Sciences Po university, told TIME on Sunday night, as it became clear that Macron had won. “He will have to negotiate more, and look for compromises.”

Struggling to make ends meet amid rising inflation, and on meager paychecks and pensions, many have said they don’t connect with Macron’s vision of a globalized, E.U.-centric France. “Macron doesn’t care about French people,” Le Pen voter Paméla Loire told TIME, in the northern village of Beaucamps-le-Vieux, earlier this month.

The economic inequality translated into a deep political divide in the election, with about 71% of professional voters choosing Macron, and 69% of working-class voters picking Le Pen, according to the polling company Elabe on Sunday night.

In a blitz of campaign stops, Macron told voters he had created one million new jobs since 2017, and spent billions paying people’ salaries in coronavirus relief funds. The government’s official unemployment figure of 7.4% is the lowest in 13 years.

Yet even so, more than half the voters in the election’s first round on April 10 chose, among 12 candidates, far-right or far-left politicians— a reflection of widespread anxiety and discontent with mainstream politics. “There is a sense of decline,” Nicolas Becuwe, senior director of Kantar Public in Brussels, said on Thursday, during an online presentation of the polling company’s data across the E.U. “France is the most pessimistic country in all of Europe.”

Le Pen tapped into that unease, and in the process won an important victory—albeit not the presidency. She turned her far-right National Rally party into a force in French politics, compared with the tiny 18% of votes her father squeezed out in 2002.

Crafting an image makeover, Le Pen, 53, cast herself as the champion of the have-nots, focusing more on the economy than her fiercely anti-immigrant, anti-Muslim views. She promised to cut sales tax and eliminate income tax for those under 30—no matter France’s ballooning public debt. Macron, she told voters, embodied “power without empathy.”

Macron fought back, hammering her in the nearly three-hour election debate last Wednesday, about her stance against the country’s estimated 6 million Muslims. He told Le Pen that her plan to ban Muslim women from wearing headscarves in public would “create a civil war.”

Read More: How the Far Right Already Won in France

Up until last week, many Le Pen campaign brochures included a photo of her shaking hands with Putin during a visit to the Kremlin in 2017. She financed her presidential run against Macron that year with a €12-million loan from a Kremlin-linked bank, which is now owned by a Russian military contractor—a debt that Le Pen still owes.

Macron seized on that in the election debate, telling her she “depends on Mr. Putin.” “When you speak to Russia… you are talking to your banker,” he said.

With Europe facing the biggest conflict since the Second World War, Le Pen nonetheless said that as president she would withdraw France, which has the E.U.’s strongest military, from NATO’s integrated military command—something that would deeply hurt the West’s united support for Ukraine.

All those concerns crystallized in the campaign’s final days, as Macron and Le Pen tore around France, trying to woo the 7.7 million people who had voted for the far-left leader Mélenchon in the first round.

Although Macron won on Sunday, about 28.2% of the electorate did not vote at all—the highest abstention rate since 1969—with many people telling journalists in recent days that they rejected both choices on the ballot. That high abstention rate could bode more trouble for the president’s second term. “Macron will have to try to speak to all the French people, to close the big gap between his supporters and Le Pen’s voters, and the people who did not vote,” says Lazar, the political history professor at Sciences Po, where many students joined protests over the past two weeks. The students said that just like the 2017 elections, neither candidate reflected their interests.

However, even some of Macron’s most virulent critics had pleaded with voters not to express their anger with Macron by voting for Le Pen. The leaders of the country’s two powerful trade-union coalitions—whose millions of members have staged protests and strikes for years over Macron’s policies—reminded voters on Thursday that Le Pen’s National Rally party was “deeply rooted in the history of the French extreme right, racist, homophobic, and sexist.” Yet they stopped short of telling their members to vote for Macron.

The left-leaning Liberation newspaper—which has lashed out at Macron for years—went further, publishing a weekend front page in fire-alarm red, with giant type reading, “Let’s vote against the extreme right,” and a ballot paper with Macron’s name on it. “In the face of a possible extreme-right victory in France, it is not possible to abstain,” the editors wrote inside. “We have to vote for Emmanuel Macron.”

And on Sunday, millions of French voters did just that. 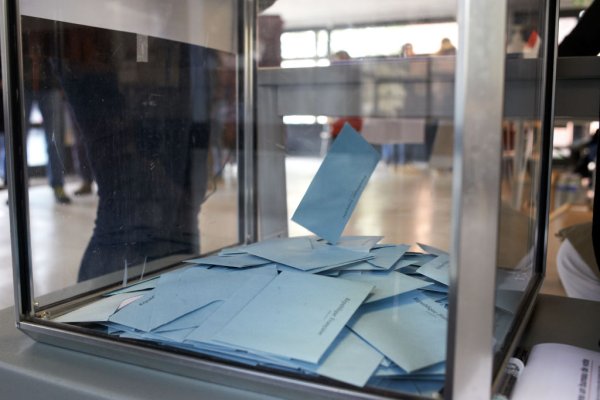 France Votes on Macron and Le Pen’s Different Visions
Next Up: Editor's Pick