In November, French President Emmanuel Macron stood under the Arc de Triomphe in Paris and told world leaders on the centennial of World War I that they needed to work together to solve global problems.

Less than a month later, the French leader is trying to find the right phrase to unite his own citizens amid perhaps the worst street violence in Paris in 50 years. The gilet jaune or Yellow Vest protests that erupted in the French capital and across the country in November and December risk torpedoing Macron’s young presidency and threatening his reform efforts, leaving him open to challenges by far-right and far-left rivals.

Named for the high-visibility vests they wear to demonstrations, the Yellow Vests took to the streets for a third consecutive weekend on Dec. 1–2. Although Macron activated an additional 4,600 security personnel and had tall barriers erected along the Avenue des Champs-Élysées, demonstrators managed to reach the Arc de Triomphe, partly vandalizing the war memorial under the arch.

The protests began in mid-November over an almost banal grievance: Macron’s decision to raise the tax on fuel in order to finance renewable-energy proposals. The tax would increase the price of diesel by 30¢ per gallon and regular gasoline by 17¢ per gallon, after a year in which prices have already risen by 16%. The tax is especially resented in small-town and rural areas, where more people depend on their cars and jobs are not as plentiful or well paid as in the capital.

But the protest has mushroomed into a much wider rejection of Macron and his policies, which the Yellow Vests say favor the rich. “Macron came out of the banks and finance, and that goes down very badly for many people,” says Thierry Paul Valette, a protest coordinator in Paris. The President attended an elite university and was an investment banker before being appointed Economy Minister in 2014. “We do not like rich people in France,” Valette says.

Voters seemed to like Macron enough when he won the presidency in May 2017 with 66% of the vote in a runoff against the far-right candidate Marine Le Pen. But Eddy Fougier, a political analyst at the Paris-based Institute for International and Strategic Affairs, says his support was driven by disappointment at the two parties that have led France for decades and fear of the far right. “He was elected largely by default.”

Since then Macron has done little to win over those beyond his base of middle-class professionals, 38% of whom still approve of him, according to a Dec. 4 survey by pollster IFOP. Soon after taking office he scrapped the so-called wealth tax, which had been imposed on taxpayers with assets worth more than € 1.3 million ($1.47 million). At the same time, he hiked taxes on retirees.

Macron’s often blunt communication style has made matters worse, fueling the perception that he doesn’t understand life on the breadline. Numerous protesters interviewed by TIME cited Macron’s recent off-the-cuff remark to an unemployed man that he could “cross the street and find a job” at a local café. Only 11% of those polled by IFOP think he understands the concerns of the French people, while other polls suggest 7 in 10 support the protests.

On the streets, protesters’ frustrations have spilled into destructive violence. Hundreds have been injured and four people have died, according to police. Some attribute this to the right-wing fringe groups and anarchist factions that have come to the fore as turnout for the demonstrations has diminished. One group’s slogan is ACAB, for All Cops Are Bastards, according to reporters at the scene.

While the Yellow Vests are led by no political party, both Le Pen and far-left leader Jean-Luc Mélenchon have called for the National Assembly to be dissolved and fresh elections called. That was the solution in May 1968, when widespread strikes and protests by workers and students brought the French economy to a halt for over a month. Macron’s government has ruled out such a move.

In fact, there is no easy political solution for Macron against a movement that has no leader, no set list of demands and no geographic base. On Dec. 5 his government said it would scrap the fuel-tax increase at least through 2019. But hours before, some of the self-proclaimed Yellow Vest leaders issued far broader demands, including boosting pensions and minimum wages.

For now Macron will hope that the tax cancellation and the violence begin to dampen public support for the protests and that the holidays sap turnout. But the damage to his broader ambitions may be harder to repair. Since being elected, Macron has attempted to cast himself as the successor to Europe’s de facto leader, German Chancellor Angela Merkel, who plans to step down in 2021 after 16 years in power.

But with his approval ratings flatlining at 23%, Fougier doubts Macron will be re-elected in 2022. “His only route to a second term is if the economic situation gets better, unemployment goes down and salaries go up and no other party produces an attractive leader in the next three years,” he says. “It’s a tall order.”

With reporting by Ciara Nugent/London 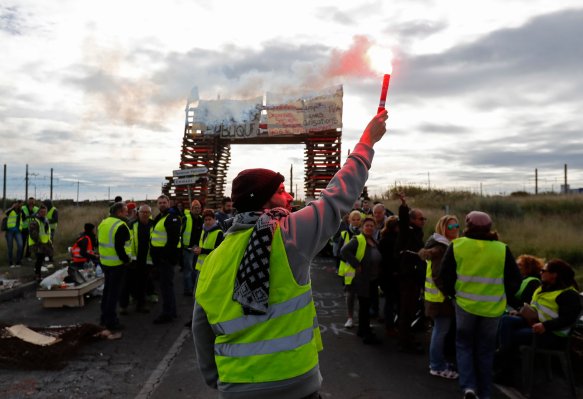