How the Far Right Already Won in France

Official campaign posters of Marine Le Pen, leader of the far-right Rassemblement national (RN) party and French President Emmanuel Macron 'La République en marche' (LREM), candidates in the 2022 French presidential election
Chesnot-Getty Images
Ideas
By Myriam Francois
François is a Franco-Irish journalist, senior fellow at the Centre for Global Policy, and research associate at the Centre of Islamic Studies, SOAS University of London. She is the founder of We Need To Talk About Whiteness website and podcast.

The results from the first round of the French elections make clear the future of France no matter who wins the presidency on April 24. The now customary face-off between the incumbent, Emmanuel Macron, and the far-right leader, Marine Le Pen, is set to repeat itself in the second, and definitive round.

With just 27.8% of the vote, to Le Pen’s 21.1%, it might seem to many outside of France that Macron’s win is in the bag. The latest IFOP poll suggests Macron could win the second round with around 55 % against 45% for Le Pen. But this is no simple rematch of the 2017 presidential election run-off.

If the last few years of populist electoral victories globally has taught us anything, it is not to underestimate anti-status quo votes which can include a much greater swath of the population than those in support of the status quo. From America to Brazil, the power of the wild card to win big is clear.

The dissolution of the traditional political left and right, saw Macron followed closely by far-right and far-left candidates, and trailed by the traditional parties who would previously have won or at least been strong contenders in this fight. Anne Hidalgo, for the socialists, received 1.8% of the votes, a damning indictment of the center-left party.

The first round offered a series of revelations, indicative of the wider mood in the country. The ideas of the far right have become dominant in France to the point that around 30% of the electorate have embraced its candidates and Macron and his party frequently embrace some of its positions.

Votes for far-right candidates, including Eric Zemmour, when added up, total 30% of votes. The mood of this election has been dominated, not by what polls reveal to be substantive electoral concerns around the rising cost of living, the environmental crisis or even the COVID-19 pandemic, but by increasingly inflammatory TV debates focused on Islam, secularism and immigration.

In the run up to the election, 80% of French people deemed the presidential campaign to be ‘poor’. It’s hardly a revelation that at a time when the French, like many in the post-pandemic era, find themselves economically squeezed, most are concerned by wages, health and standards of living, issues which the “margins” seized upon. Far-left candidate Jean-Luc Melenchon, who came third, made this his bread and butter. On the other side spectrum, but also concerned with the “working” woman’s standard of living, is far right Le Pen. Together the parties, whose growing popularity speaks to the salience of the concerns, have outpaced traditional parties in addressing increasingly basic needs for many French people: how will they get by?

The rise of the far-right is often presented as only a peripheral threat, but in France, it has been dictating the terms of the political debates for the last decade, as 2022’s presidential campaign proves. And it has done so with the complicity and in some cases, the support of portions of the French media. The owner of one of France’s main media hubs Canal+, the French billionaire businessman Vincent Bolloré, provided racist polemicist and presidential candidate Eric Zemmour with the platform and prominence necessary to turn him into a household name. It is arguable whether Zemmour would ever have been able to run for presidency, let alone achieve the success he did, without Bolloré’s backing.

Le Pen’s party has made gradual and consistent political gains over the last two decades at almost every level of the French political system—it now holds local and regional seats across France, since 2014 it has seats in the Senate and a majority of the French seats in the European parliament. The military and the police now show strong support for the far-right, at around 40% and 70% respectively. In April 2021, on the 60th anniversary of a failed putsch to derail Algerian independence, over a thousand members of the French military, some with known ties to the far right , published an open letter to President Macron, threatening a military if he didn’t take a harder line on tackling ‘Islamism’, increasingly not so subtle code for Muslims, persistently depicted as France’s fifth column.

Applauded by Le Pen, the letter was a stark reminder that today, whatever the results at the polls, the far-right is far more than a party: it is an ideological movement, posing a profound threat to French and European democracies.

Most people will look to the presidency as the next frontier in Le Pen’s political expansion, but for many French voters, this simply would not be the tsunami it has previously been thought of. For a start, the Republican front which used to form a coalition to keep out the far-right, has broken down, something Macron himself acknowledged. Today almost 50% of French people no longer fear a Le Pen presidency. There are several reasons for this.

The party’s efforts at normalizing its image, successfully boosted by the regurgitation of far right themes, such as “the great replacement,” is certainly one reason for this shift. Today, it’s no longer taboo to say on French TV that France is incompatible with Islam or to openly exaggerate figures suggesting that “half of France will be Muslim by 2050,” or even to write a bestselling novel fantasizing about an Islamist takeover of the country.

But the main reason a Le Pen presidency is no longer feared by so many, is that in power or not, far-right ideas in terms of anti-Muslim discrimination, are already the norm.

In fact, Le Pen’s discourse on Muslims can appear tame next to that of even Macron’s ministers. Interior minister Gerald Darmanin, speaks of the need to “halt the ‘ensauvagement’ [wilding] of society,” a fascist trope that Marine Le Pen has used repeatedly. In a debate against Le Pen last year, Darmanin lambasted her for being ‘too soft’ on Islam, and it was Darmanin again who intervened personally to prohibit the construction of a previously approved mosque in Strasbourg. In its bid to appeal to Le Pen’s voters, the LREM has quite literally sought to out-fascist the fascists.

As the sociologist Hicham Benaissa points out, the more Islam has become a French religion, the more it has become defined as a “problem, ” by virtually every segment of the political class. Of course, Macron is more subtle, referring Islam as a religion in “crisis,” or in code, “Islamism,” in need of French regulations and secularism to curb its extremist tendencies. Others have been more direct: “Islam is the antithesis of France and incompatible with the country,” Zemmour told viewers during a campaign debate in September.

Basic elements of Muslim life from prayer to dress codes, dietary habits have been reimagined as cultural battlegrounds, with Muslim French citizens the collateral damage. The right echo the idea of Muslims as a security concern, while the left take up the cultural narrative, of Islam’s alleged incompatibility with French values, namely laïcité. In either direction, Muslims are now an accepted “problem.”

Nor is there any real political opposition to this fascist wave. Once the mortal enemy of the far-right, secular leftists have been among the most vocal critics of the visibility of Muslims in public spaces, calling for ever more far reaching bans on the headscarf, on the ‘burkini’ (deemed “incompatible with French values”), on mosque construction, and calling on Muslims to be “discreet.”

As the academic Jacques Ranciere points out, in the battle to uphold Republican principles, the left mobilized traditional leftist ideals but subverted them in an effort to appeal to Le Pen’s growing audience. This produced a new racialized leftism, which has completely abandoned the Black and brown working class. The convergence with Le Pen’s national socialism is striking. Today, her party has won over many former leftists and polls show that around half of voters on the left no longer endorse a front to oppose her. In the run up to the second round, she called on voters “from left to right” to vote for her “social justice” candidacy, in a nod to the far-left voters of Jean-Luc Melenchon, 30% of whom, polls say, will vote for her.

Everywhere you look in France today, the space to resist authoritarian racist policies is shrinking and far right ideals are finding fertile ground. Macron has sought to embody the center ground and so far, his relative success in the first round, suggest an appetite for such a line is present.

But the far right don’t need to win the presidency. They simply need to be seen as the only legitimate opposition, in a country where they are now considered the political counterweight, and as such, the agenda setters. That in itself should worry us all. 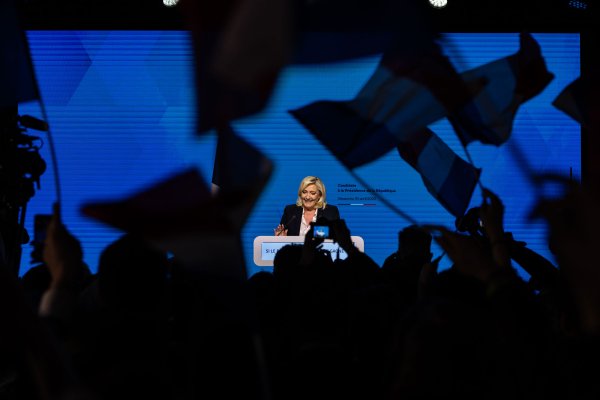