Ideas
By Scott H. Irwin
Irwin is the Laurence J. Norton Chair of Agricultural Marketing and professor in the department of agricultural and consumer economics at University of Illinois Urbana-Champaign.

Since the breakup of the Soviet Union in 1991, Ukraine has regained its traditional position as one of the most important breadbaskets of the world. More than 55% of Ukraine’s land area is “farmable” and it has some of the most productive soils in the world. According to the USDA, Ukraine produces about 4% of global corn and wheat supplies, 7% of barley, and 31% of sunflower oil.

It is not just the size of Ukrainian crop production that is worrisome for global food supplies, but the fact that so much of it is exported. Ukraine is now the 5th largest exporter of wheat in the world, supplying 10% of global wheat exports. Ukrainian farmers have fallen in love with corn, and now contribute nearly 15% of global exports. Agricultural products are Ukraine’s largest export and were valued at nearly $70 billion in 2021.

Of particular concern is the destination of some of Ukraine’s agricultural exports. In the wheat market, the main buyers include Bangladesh, Egypt, Indonesia, and Pakistan, all countries with rapidly growing populations and limited means for dealing with shortfalls. This is not as a big of a concern for Ukraine’s corn exports, as China is its main buyer and has a surplus of corn.

Agricultural markets are used to dealing with substantial reductions in crop supplies due to weather-related problems, mainly due to drought. Weather-related supply “shocks” can be rather large. In 2012, the U.S. Corn Belt experienced one of the worst droughts of the last century and corn production was reduced over 1.6 billion bushels compared to the previous year. This represented about a four percent reduction in global corn supplies. The price of corn spiked upward but there was not a widespread food crisis because reserve stocks were drawn down, usage was cut, trade reshuffled, and acreage expanded fairly quickly.

The big question is whether the impact of the Ukrainian conflict on global grain supplies is likely to be similar to a severe drought or something much worse? There is definitely the potential for the latter. A drought typically does not zero out entirely crop acreage in a major producing country. This is where the timing of the Russian invasion is so important. The planting window for spring crops in Ukraine is basically the same as it is in the U.S. Corn Belt—April and May. Once the war started on February 24th it was easy to see it spilling into the spring planting season and severely affecting the ability of Ukrainian farmers to get their crops in the ground. The fear was that little, or even none, of Ukraine’s spring crops would be planted.

The obstacles that Ukrainian farmers face at the present time are certainly formidable. There is no prospect of planting spring crops in the areas with active fighting. Other parts of the country so far spared fighting face considerable challenges. There are significant shortages of fuel, labor, and other crop inputs, especially fertilizer. Just imagine how many Ukrainian farmers have taken up arms and are fighting somewhere in the country right now, just as the prime planting period is scheduled to begin. If that were not enough, some areas have mines left in the fields

Going against this pessimistic view is the inherent resourcefulness of farmers. We certainly know from social media that Ukrainian farmers have been very resourceful in stealing Russian tanks and armored vehicles. There is room for a bit of optimism on this front given the recent pullback of Russian troops away from territories in the north. This means that large chunks of Ukrainian crop production are now not as directly threatened by the fighting. But one has to keep in mind that war is inherently unpredictable, and things could reverse quickly in coming weeks. Plus, heavy fighting continues in the eastern and southern regions of Ukraine, and this contains some important crop producing regions—and, importantly, the major ports through which Ukraine ships its crops to the world.

The Ukrainian Agricultural Ministry surprised many by saying that it expects 70% of spring crops to be planted, and up to 80% if “de-mining” is completed in northern areas previously occupied by Russia. While this can probably be discounted as having an optimistic bias, I think this is an important perspective that should not be dismissed out of hand. While all of Ukraine’s spring crops are obviously not going to get planted, this suggests the worst-case scenarios of just a few weeks ago are not likely to happen. I think it is now safe to assume that at least half of Ukraine’s spring crops will be planted, and I will not be surprised if two-thirds or more is planted. If there is one thing farmers around the world love to do, it is to plant their crops. If there is a way, they will figure out how to get it done.

Even if I’m right to be guardedly optimistic about Ukrainian farmers this spring, there is still a long ways to go in terms of getting their crops out of the field. The winter wheat harvest will begin in June and that is followed by the fall harvest of spring planted crops. In a war-torn region much can go wrong.

Then there is the issue of getting the crops out of the country even if they are produced. This may turn out to be the real bottleneck. International shipping from southern Ukrainian ports along the Black Sea is at a complete standstill and is likely to remain that way as long as the war continues. It is impossible to get insurance on shipping in this area. This is a great example of a little noted part of commercial business transactions having major economic implications. Progress is being made in rerouting crop exports via rail and truck from Ukraine, but this is more expensive and much lower capacity than ocean freight.

So, is the world facing a full-blown food crisis brought on by the conflict between Ukraine and Russia? Based on what I see today, I don’t believe that is the case. World grain markets are in the process of sending signals to producers and consumers to make needed adjustments, hence the higher prices. If Ukrainian farmers get as much of their crops planted and harvested as I think they will, then the shortfall in production will not be as severe as was feared.

While the world may avoid a food production crisis, there is likely to be a food affordability crisis in parts of the world. Ukrainian (and Russian) wheat imports are a staple in the diet of many less-developed nations in the Middle East and Africa. As grain markets do their job of cutting demand in the face of smaller supplies, someone has to be priced out of the market. Unfortunately, this usually falls most heavily on the poor in importing countries. This does not bode well for the well-being of millions of poor people around the world or political stability in many less-developed countries. David Beasley, executive director of the U.N. World Food Program, says that the war in Ukraine is turning “the breadbasket of the world to breadlines.” The situation certainly deserves careful monitoring and the provision of as much help from rich countries as can be summoned.

Finally, we cannot forget the role that Mother Nature will play in all this. If there was ever a summer when the world needs good weather in important crop producing areas around the globe, this is it. 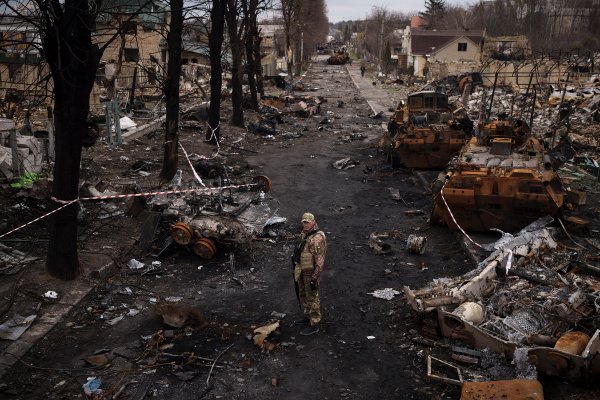 What the U.S. Military Needs to Learn from the Ukraine War
Next Up: Editor's Pick