Ukrainian Wheat Is Once Again Changing the Course of History

Wheat grows in a field near Uzhhorod, Zakarpattia Region, western Ukraine in 2020. - PHOTOGRAPH BY
Serhii Hudak- Ukrinform/Future Publishing
Ideas
By Scott Reynolds Nelson
Nelson teaches history at the University of Georgia. His new book Oceans of Grain is available from Basic Books.

The forty-mile convoy that was stalled between Prybirsk and the airport northwest of Kyiv is a metaphor: for inattentive tank maintenance, for battalions dependent on artillery, and for a poorly-planned Blitzkrieg. Those tanks and supply vehicles—now dispersed and sinking in the mud—suggest how every human endeavor relies on lines of supply that can only be seen by satellite. Vladimir Putin’s desire to control Ukraine’s flat prairies above the Black Sea is not just hubris. Russia’s most productive wheat lands are directly north of Ukraine, and much of its grain passes south through Odesa to foreign markets. The Soviet Union (1917-1991), and the Russian Empire before it (1721-1916), built an empire in part by seizing control of the flow of Ukrainian wheat that traveled over those roads on their way to the rest of the world. Putin hopes to restore it.

Peter the Great envisioned a Russian Empire in 1721, but Catherine the Great realized it beginning in 1768 by sending invasion forces south into the steppe region we now call Ukraine. The route was the same as the present-day path through Kyiv. In a near-continuous series of wars between 1768 and 1856 she and the tsars who followed her seized much of modern day Ukraine, and learned to tax the roads that carried life-giving grain to the Black Sea. Without that bounty, without those roads, Russia would have remained under the shadow of Sweden and the Polish-Lithuanian Commonwealth whose timber and grain supplied Europe and whose armies and navies dominated the Baltic Sea.

Russia needed to invade southward. No one understands that better than Vladimir Putin. But in his quest to take Ukraine he has ended up harming Russia’s own grain economy, with exports now stalled on cargo ships on the Black Sea, unlikely to reach their intended markets until the war ends or sanctions lift. That, as much as sanctions, will doom this endeavor to reconquer Ukraine.

The medieval Ukrainian term for those travel corridors is chorni shlyakhyy (the black paths) and imperial strategists understood that those paths could feed an empire by selling grain to a hungry world. The person who understood this better than anyone was a grain trader and communist intellectual named Israel Alexander Helphand. His pen name was Parvus, and he is the most important intellectual of the twentieth century you have never heard of. As a young man in the 1870s he worked on the docks of Odesa, watching grain leave its port for London, Liverpool, Antwerp, and Amsterdam. His neighbors, mostly Jewish merchants, made long-term contracts to buy grain and load it onto thirty-ox caravans that wended their way from the fertile plains of Russia and Ukraine to the deep ports of London, Liverpool, Amsterdam, and Antwerp which he called consumption-accumulation cities. These ports would turn grain into flour and bread enough to feed a growing working-class in the grain-gobbling countries of Italy, Germany, Britain, and France. Since the 1850s cheap Ukrainian grain and the cheap bread it produced fed the new factory workers who were moving from the European countryside into its rapidly expanding cities. It’s not widely understood that industrialization in Europe depended on a yearly dose of approximately one million tons of cheap Ukrainian grain.

Helphand witnessed the murderous pogroms that began in Odessa in 1873, most led by the Orthodox Church and directed at Jews like himself, his family, and his friends. By 1881 the brutal reign of the tsars, their local governors, and the Orthodox Church led him to embrace communism, though as a grain trader he found himself disagreeing with important parts of Marx’s doctrine. His revision to Marxism derived from his understanding of how the grain trade had changed in the decade before he arrived in Odesa. By 1881 every trader knew that the world’s leading grain market had become the American juggernaut that had emerged during the American Civil War. In 1863 the Union Army had created a new system of purchase—the futures contract—and of supply, with four competing grain railroads that carried wheat from the American plains to port cities like New York on the Atlantic Ocean.

While Parvus did not understand quite how America did this, he did know that between 1863 and 1873 cheaper American grain, sold by telegraph before it even arrived in Europe, had nearly replaced Russian grain in most European ports. What Helphand saw was a financial downturn that started in Ukraine in 1872 and spiraled out to the rest of Europe in what we call the Panic of 1873. Parvus understand the trade as invisible lines across plains and over oceans, lines of power that reshaped the world. As grain trading patterns changed, new ports were built, and old trading relationships collapsed. Parvus saw an invisible force in those black paths that he was sure could be used to topple the Russian Empire and replace it with something else—the Russian Revolution.

Parvus knew that the paths from the Ukrainian plains south to the Black Sea and north to Moscow and Petersburg were as fragile as tanks in the spring mud. In 1900 he founded a newspaper called Iskra (the spark) in his apartment in Berlin. By then he was on the run from Russian security agents called the Okhrana who dogged him out of every city in Germany. His associates are better known. Vladimir Ulyanov (Lenin) had become convinced by Parvus’s writings that a revolution in Russia was possible; Rosa Luxemburg (Junius) learned about the power of the mass strike and an international capitalist world order. She revised and extended the story to reach a broader reading public of German workers. She used Parvus’s invisible lines to create a new way of understanding trade that we now call world systems theory.

Lev Bronstein (Trotsky) joined Parvus in Petersburg in 1903. In 1905 the two saw that Russia’s war against Japan was never going to succeed. They went to plot a revolution of workers in Petersburg by forming the first soviet, a union of workers’ deputies. That revolution failed, and both Parvus and Trotsky had to escape from prison to avoid execution. They learned over the next twelve years by watching a nation form in Turkey how to create a fighting force that combined education and military service that would come to be called the Red Army.

Istanbul, Parvus understood, was also the key to a victory over Russia once World War I began. By then, Parvus had decided to side with Turkey and Germany against Russia, France, and Britain. Bottling up Russian wheat exports in the Black Sea, Parvus reasoned, would prevent Russia from feeding France and Britain through its ports. (By then German U-Boats restricted America from feeding Europe.) Parvus helped secure weapons that would defend Turkish Gallipoli.

In a fateful alliance Parvus persuaded the German government that the way to stop the war on the eastern front was to give him tens of millions of Deutschmarks to fund a grain-smuggling operation on the Baltic Sea. In addition, Germany only needed to send a sealed train of Bolsheviks and Mensheviks to the Finland Station in St. Petersburg. Parvus would use the proceeds from grain sales to pay for Bolshevik newspapers that would convince Russian soldiers and sailors that the war was fruitless and that revolution was the only solution.

After the Russian Revolution started in 1917, Bolsheviks interfered with the liberal government’s plans to feed Moscow and Petersburg from Ukraine. They did so by infiltrating Russian railway unions who helped block the roads that would feed the cities. Poverty sharpened the anger at the liberal government and allowed the Soviets to take over in Russia’s major cities. It took nearly five years and millions of deaths in the Russian Civil War. Even then, Russia was too small and too far from the Black Sea to make it on its own. The Russian Socialist Federative Soviet Republic became the Union of Soviet Socialist Republics (USSR) by including Ukraine and Georgia as semi-independent states. Years later Josef Stalin would eliminate Ukraine’s independent status with a punishing artificial famine in the 1930s.

Since the Russian wildfires of 2010 Ukraine’s grain exports have quadrupled, turning Ukraine into the world’s fifth largest supplier of wheat. As Ukraine has returned to its glory days of the nineteenth century it threatens to unseat Russia as the major grain exporter on the Black Sea. The invasion may yet succeed but Putin’s plan to fully integrate Ukraine into Russia are as flat as the tires on so many of the vehicles sinking deeper into the black path that leads to Kyiv. Russia and Ukraine have depended on one another for centuries, but those days are over. 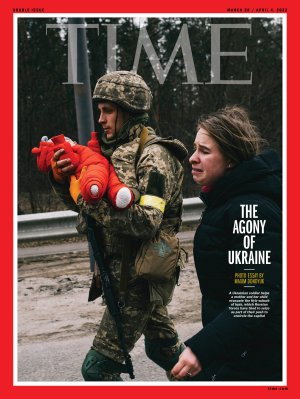